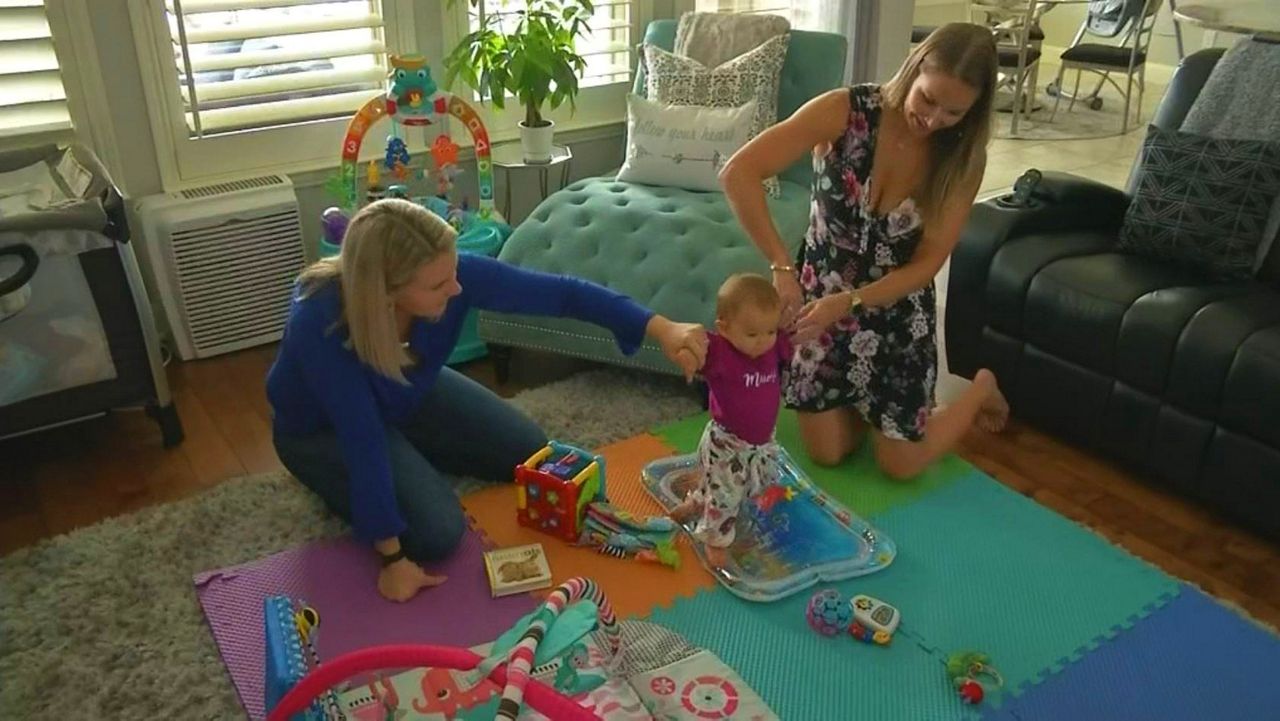 AUSTIN, Texas — Four years into their marriage, Chantelle and Courtney Graham expanded their family from two to three.

Through a process called reciprocal in vitro fertilization (IVF), Courtney’s fertilized egg was placed in Chantelle, who carried their baby Maiori to term.

“So Chantelle birthed Maiori, and Maiori has my genetics," said Courtney Graham. "So that's what reciprocal IVF does is it allows you to, in our situation, for Chantelle to have this, you know, birthing connection with Maiori, but also be my genetic child. So that's like, kind of where we have the best of both worlds for sure.”

But despite being married, and Maiori having Courtney’s DNA, Courtney’s parental rights were not guaranteed.

"A heterosexual couple that went through IVF, even if they didn't use the father's sperm and it was donor sperm, they're still granted their parental rights. And we aren't. So that's what's really frustrating and really unequal about the law today," said Courtney.

Both Courtney and Chantelle are on Maiori’s birth certificate, but there are cases where Texas judges only granted parental rights to the woman who gave birth to the baby.

"We thought, you know, having gay marriage legalized federally would eliminate all of these issues. And it just, it hasn't, I mean, all it covers is just the union, our union being federally recognized. It does nothing for the rest of our family," said Chantelle.

“It was really painful to hear that in our marriage, and the fact that we are like lovingly bringing a child into the world that we're suddenly second class citizens for something that seems so normal for us,” said Courtney. "We're having a baby in our marriage."

To protect her rights as a parent, Courtney had to formally adopt her own biological daughter.

"I think what really doesn't make sense to me is that our marriage is federally recognized as equal, but if we were in a heterosexual relationship, we wouldn't have to go through this. If all other things were the same, and Courtney was a man, then she wouldn't have to adopt her own child. It just felt really unfair," said Chantelle.

"You can find plenty of room in the Texas Family Code to make the argument that they shouldn't even need to do it, that these people are already parents under the family code for this reason or this reason. But because of prejudice, and because of sometimes even prejudice in the appellate courts and some court decisions, there are opinions saying otherwise. So in order to have the maximum protection, before there's a problem, [LGBTQ] people go get the court orders to protect their families," said Andresen.

"I mean, it still happens all across Texas, where adoptions don't get granted to LGBT families. I mean, it really is so dependent on the county, the judge, the situation. I think what's so infuriating and kind of humiliating in this process is like that there's no protection underneath our marriage," said Courtney.

"We can use adoption, we can use parentage orders, we can use these older structures and explain to the court how this kind of family fits into these and get them the orders they need to protect their family but it's you know, it's not free," said Andresen.

The Grahams said they had to pay $900 for the home inspection, $5,000 in legal fees for the adoption, as well as court fees.

"There's a financial burden," said Courtney. "It also increases the inequality for families who can't afford a lawyer and can't afford to do this."

This week, about eight months after Maiori was born, a judge approved the adoption.

“We came out of that kind of bittersweet because we were thankful that Courtney's rights as a parent, were protected. But we're also just frustrated that we had to go through this and knew that we'd be going through it again in a couple of years," said Chantelle.

Courtney and Chantelle plan on having more children, and with each one, they'll have to go through the entire adoption process again.

“I think part of my like utopia, or my outcome of this would be can we change the laws to get it so that we're recognized in our marriage, that Maiori’s ours. And maybe that will change with getting the word out there that this is how the laws are today. And hopefully, you know, in the future we won’t have to go through this process again," said Courtney.