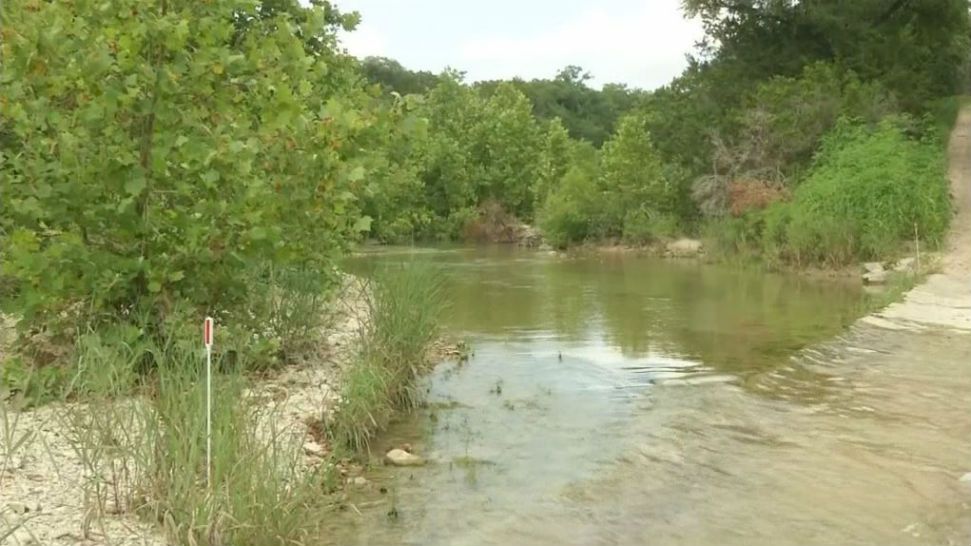 Creek bed that could be impacted by wastewater discharge. (Spectrum News)

DRIPPING SPRINGS, Texas – An Austin-area organization is trying to put a stop to a permit application it says could have negative impacts on Barton Creek.

The Cleveland family has owned a plot of land off Highway 290 near Sawyer Ranch Road in Hays County for generations. Over the years, they’ve been selling off portions of the property and now, they’re ready to sell what remains.

They are hoping restaurants and fast food chains will be the new buyers.

In 2017, the family filed an application with the Texas Commission on Environmental Quality (TCEQ) for a wastewater discharge permit.

Currently, the property relies on septic tanks and this permit could make the property more appealing to potential buyers. The family doesn’t plan on building a wastewater treatment plant on the land themselves.

However, that possibility is causing alarm among some local groups, because what's left of the Cleveland Family Ranch sits on the contributing zone of the Barton Springs Edwards Aquifer.

“What that means is that we're in an area where water that falls from the ground here or is discharged from a plant, ultimately, goes to a place where it's going to recharge underground and come out at Barton Springs," said Angela Richter, executive director of the Save Barton Creek Association.

The organization is concerned about the wastewater permit application filed by the Cleveland family.

If approved, it would allow 92,000 gallons of treated wastewater per day to be pumped into man-made ditches alongside Highway 290.

Those ditches would discharge the water into a pond system in a nearby residential neighborhood, and from there it would flow into Long Branch, and eventually Barton Creek.

“The City of Austin recently did a study showing exactly what the water quality impacts would be, and they showed that even though this is not going directly into Barton Creek, it's got a few stops along the way. Barton Creek itself would actually have increased algae, which in turn can cause issues like fish kills," said Richter, "And so we're really concerned for the ecology of the creek."

Long Branch flows into Barton Creek on Shield Ranch, which is protected wildland.

The family that has owned Shield Ranch for generations is also concerned about the impact of the treated wastewater.

“We do know that the biology of the creek will be altered," said Christy Muse, chief external relations officer at Shield Ranch, "So what we have now would be different. That could be algae blooms, there could be some things that are invisible. But they change what's happening in the water so it's no longer the same water that the wildlife depend(s) on.”

"We call the water that comes out of the [wastewater treatment] plant 'effluent,'" said Richter, "What is in that effluent water are high nutrient loads much higher than are in the local creeks here, so things like nitrogen and phosphorus, and those are what are responsible for those algae blooms that we've been seeing unfortunately across the whole country and in places like Liberty Hill."

Stephen Cleveland filed the permit application with the TCEQ on behalf of his family.

“If the state of Texas deems the outflow from this type of treatment plant as regulated by the state is a viable option for water for wastewater treatment, there is no reason that we should not be able to apply for the permit," said Cleveland.

He says the permit would make the land more attractive to buyers that might be interested in building a food establishment on the property.

That's what the family hopes for, to give the workers at the businesses on the family's old land a place to eat close by.

"I would like to leave a nice development on my grandfather's land that he owned, that we inherited," said Cleveland, "It's a legacy to my grandfather and grandmother."

Cleveland says he contacted the TCEQ about a month or two ago to change the discharge permit application from 92,000 gallons per day to 46,000.

Although Cleveland filed the application in 2017, the TCEQ has not yet approved or denied the permit. ​

“Generations of Austinites have worked so hard to protect Barton Creek and make it the place that we all enjoy," said Richter, "And so, I just hope that, you know, this isn't able to go through and that we're all able to come together for better solutions that protect the creek.”