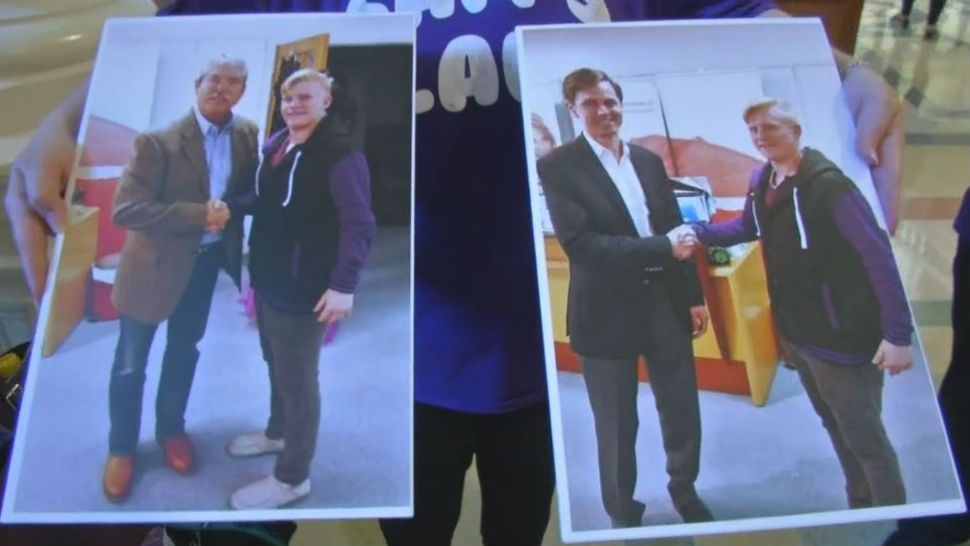 AUSTIN, Texas -- If you know someone who lives with epilepsy, you know how terrifying a seizure can be.

However, caring for a child with the disorder can be even more scary.

There are nearly 50,000 Texas kids that live with epilepsy, and that has led several state lawmakers to push for all Texas teachers to know how to respond should a student have a seizure in class.

Student Trysten Pearson said it is difficult to explain what it's like to have a seizure, since he can't remember it. But he said he always remembers what he feels like when he's finally freed from the grip of a terrifying episode.

"When you feel left out, and you can't do anything like other people, you just feel sad," said Trysten.

Trysten's struggle with the disorder brought him to the Capitol. He and his high school teacher drove up from Galveston to encourage lawmakers to pass what's being called "Sam's Law." The bill is named for Samantha Watkins, an East Texas high school student who died in 2016 after having an epileptic seizure.

Since then, a teacher from her school has been pushing to make sure all school personnel are trained to know how to respond. Trysten's teacher took the initiative on his own.

"As luck would have it, about a month into school, Trysten did have a seizure in my classroom and I knew what to do," said Mike Dudas.

"He means a lot to me. He's helped me through a lot of stuff," said Trysten.

If passed, the measure would mean anyone in contact with students would be required to take an approved, online epilepsy training course.

"I think this is something that really needs to come to the forefront, because Trysten, like so many kids, are subject to sudden death," said Rep. Mayes Middleton, R-Wallisville.

The training would come at no cost to districts if the bill passes. The Epilepsy Foundation would provide a video and materials to Texas public schools.