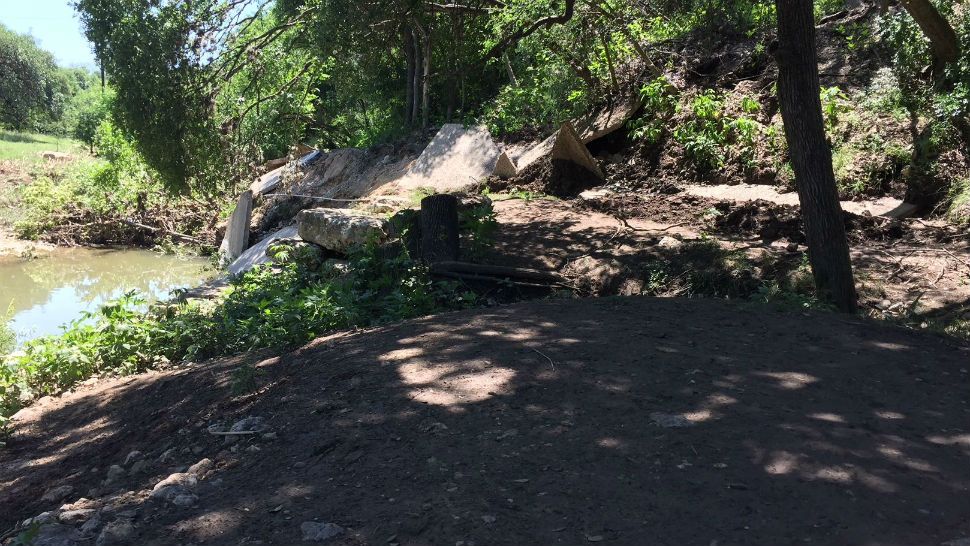 AUSTIN, Texas — The hike-and-bike trail along Shoal Creek off North Lamar Boulevard will remain closed until further notice after being heavily damaged during Friday’s storms.

The city says the damage to the trail between 24th and 25th streets was caused when part of the hill the trail sits on experienced a “slope failure” and slid down during Friday's storm.

A memo released by the department details the damage to properties uphill from the creek and to a "boulder wall built to stabilized the channel bank."

"Of immediate concern is the large quantity of soil, rock and debris in the creek (...) this could pose a problem with conveyance of flood flows within the creek," the memo says.

Heavy rains on Friday swelled Shoal Creek by 11 feet. According to Austin’s Camp Mabry weather station,  3.67 inches of rain were recorded on Friday.

The last time "slope failure" occurred in the area was in 1998. According to the report, the bluff above Shoal Creek is comprised of Buda limestone overlying an unstable Del Rio clay formation. Fractures can develop in the limestone and large masses slide off, riding on the top of the clay. The fracturing is the result of movement in the clay beneath the limestone.

"Water movement itself can move some of that material," said Mike Kelly, P.E. of the Austin Watershed Protection Department. "Any time you move some of the soil, the rest of the mass could slide in response to that."

Kelly said hike-and-bike trail improvements were very unlikely a contributing factor, and that mass movement of soil like this is typically a combination of geology, water and topography (in this case, steep slopes). The same area was patched after the landslide 20 years ago.

"Think of it as a patch on a piece of fabric," Kelly said. "The patch held very well, but the rest of the fabric fell away."

It is unknown at this time when the trail will re-open as damage and how to repair is still being assessed.

Shoal Creek Conservancy has been working with the City of Austin to develop a 10-mile trail along Shoal Creek from Lady Bird Lake to U.S. 183. The nonprofit's Ted Siff said a comprehensive Trail Plan is expected to be finished soon.

"I am sure we will make some adjustment concerning this new trail improvement that need to be made," he said. "That's an absolutely critical link in the whole trail system."