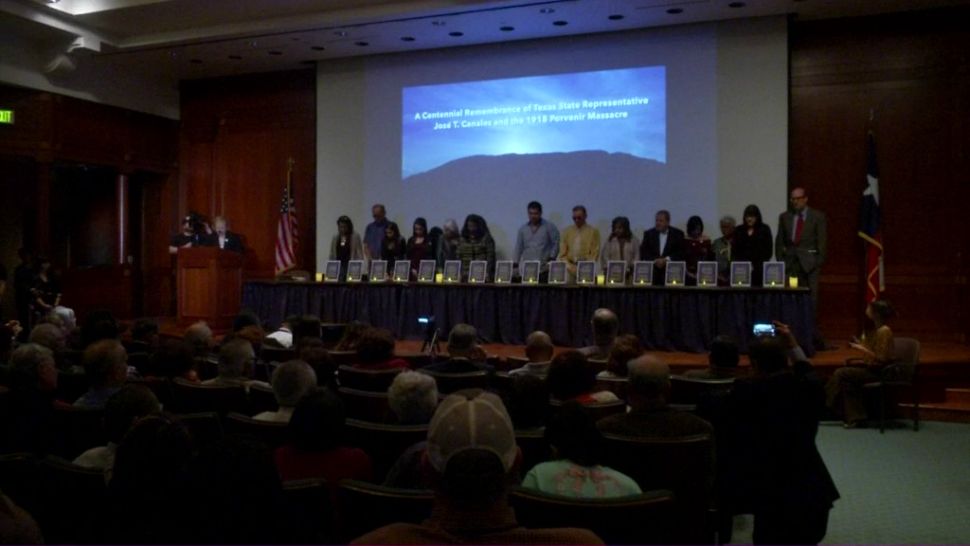 AUSTIN, Texas -- The history of the Porvenir massacre in Texas Big Bend is largely still untold.

Even though it's been 100 years, the tale still haunts family members of those who died.

In a dark room, Texans reflected on an even darker time in state history. Descendants of those who died 100 years ago in the Porvenir massacre want their stories to be known.

"So much has gone into hide the story," said Arlinda Valencia, one of the descendants.

Historians say on Jan. 28, 1918, Texas Rangers claimed that the men of Porvenir were bandits, but there was little evidence providing so. Fifteen innocent and unarmed men ages 16 to 64 were killed.

"In order to move forward, we have to forgive and I understand that. But that doesn’t mean that we can’t ever forget, we have to keep it in our memory,” said Valencia.

At the State Capitol, family members, elected officials, and other residents from across the state commemorated the 100th anniversary of the tragedy that struck the small, border town.

Many hope to share the history in museums and textbooks.

"The reason that all children in Texas and the United States should know about this is because these 15 men and their sacrifice and the strength of their families is not only something that is historical, but it's also important. It's what re-organized the Texas Rangers to be the outstanding organization that they are today,” said said Georgina Perez, who is on the Texas State Board of Education for District 1.

Austin filmmaker Andrew Shapter is also bringing the story to life in a documentary. Filmmakers are using dramatizations, as well as new and archival interviews.

"The story of the atrocities that involve Latinos especially in Texas and Tejanos and people that were here well before the state became a state has really, largely been ignored by Hollywood and by mainstream documentaries. The takeaway is there will hopefully be more after this one, because there are more stories to tel. There are more Porvenirs,” said Shapter.