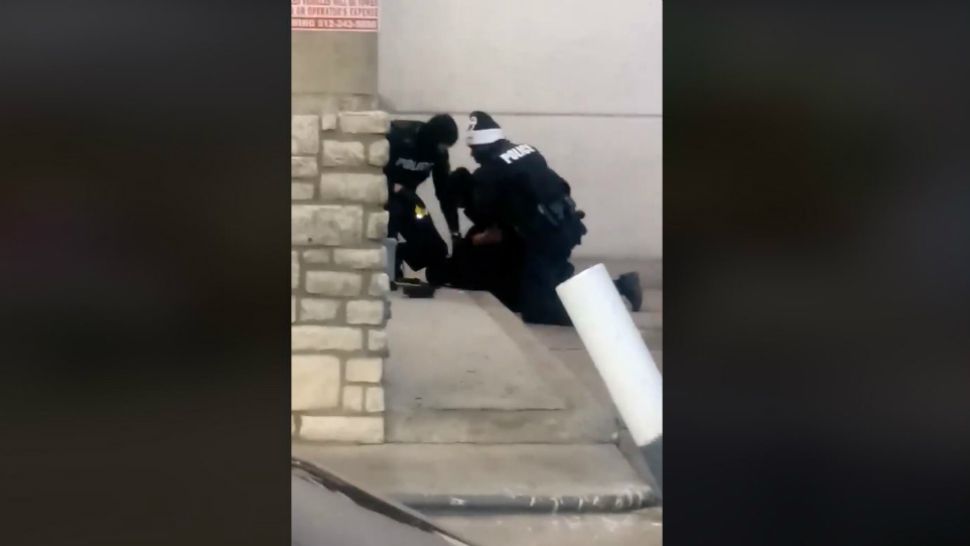 AUSTIN, Texas – Austinites are outraged over a viral video that has surfaced on Facebook showing Austin police officers beating a man in handcuffs.

The Facebook video has more than one million views showing the violent arrest of a man at a convenience store. Several officers can be seen punching and holding a suspect face down on the concrete. The suspect has been identified as 37-year-old Jason Deshun Donald.

The incident began when officers confronted Donald who was seen crossing the street illegally on the 900 block of Red River Street. The affidavit states Donald was grabbed by officers when he refused to walk forward across the street.

Donald was immediately handcuffed in front of the store before officers moved him to the side of the building out of one of the security camera’s views. Austin police said they are investigating a second surveillance video taken from the side of the store that shows what was out of view from the other recording.

According the the affidavit, during the arrest Donald slipped out of his handcuffs and tried to pull away from police. A struggle ensued and all three officers and Donald fell on the sidewalk. To regain control police tried to tase Donald, but pulled the prongs off of him with his free hand.

“In the surveillance video, it is clear that the suspect managed to slip one hand out of the handcuffs and had his hands in front of him. The officers and suspect end up going to the ground, while the officers attempt to overcome his resistance and place him back in handcuffs,” said Austin police in an official statement.

In the Facebook video, it is not clear if Donald slipped a hand out of the cuffs. The beating as well as sounds of Donald crying out for officers to stop.

Austin police said two of the officers were wearing balaclavas that hid their faces. Police said they are changing this policy to make sure officers do not cover their faces unless they are approved to use tactical gear. One of the officers can also be seen wearing a Santa hat with the word “Naughty” on it. APD said the hat is not allowed and is also being addressed.

Donald is charged with resisting arrest and manufacturing or delivering a controlled substance.

APD is currently investigating the incident. The officers involved have not been named.

Jason Deshun Donald, 37, was arrested by Austin police in a viral video many are questioning as excessive use of force. (Courtesy: Austin Police)