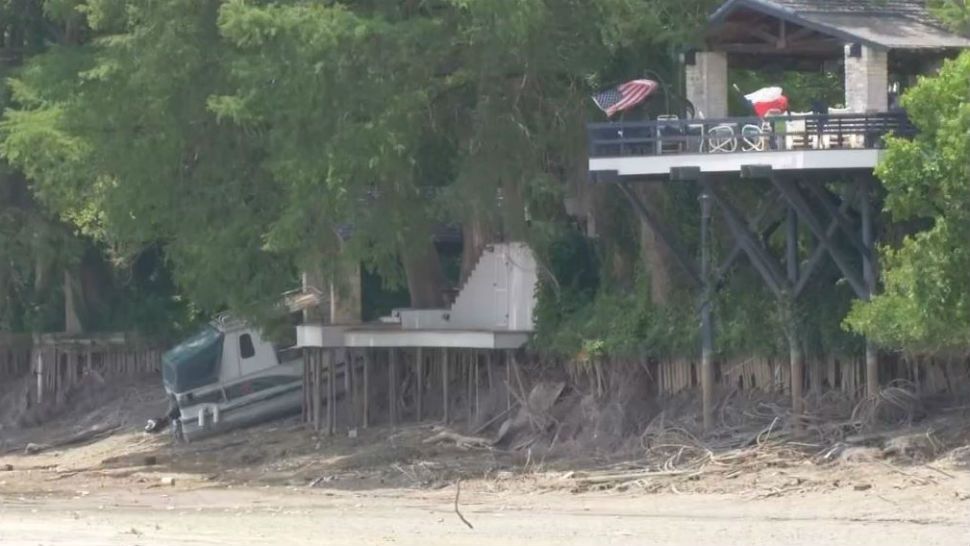 Life along Lake Dunlap has changed for residents and businesses after the spill gate failure. (Spectrum News)

NEW BRAUNFELS, Texas – After the spill gate failed at the Lake Dunlap dam two weeks ago, life for those along the lake has drastically changed, which is especially true for those who make their living when the lake is full.

"All my customers are heartbroken to say the least," said owner of NB Boat House Chip Bryant, talking about the lake drying up. "My employees' reaction to this was panic, not knowing if they would have a job tomorrow."

"About 60 percent was directly affected by this being that ​I had 60 percent of my books over the next three months on this lake," Bryant said.

Lakeside residents believe that it's the perfect time to overhaul their boat docks, but Bryant said that misconception is not the case.

"My business is completely geared towards floating a barge and doing repairs with an excavator on a barge," Bryant said. "So, the misconception is that now's a great time to do the work, and it is for homeowners to do small repairs, but for businesses such as myself, we can't do it."

Bryant had to think quickly in order to make ends meet.

"Friends and family asked me if I was going to get into helping recover boats and my first gut reaction was no. I couldn't imagine that the people would trailer their boats to a different lake, that they would just leave them there," Bryant said. "With that said, that was when they were speculating that it was going to be 18 months down. Now that we're hearing that it's going to be four plus years, all those people are frantically trying to get their boats out of the lifts."

Memorial Day on Lake Dunlap isn’t the same this year following the spillgate failure at the dam on May 14. The body of water that was once filled with lake goers is now dry and deserted, with hundreds of boats stuck in lifts. pic.twitter.com/DKLkTDoG5R

That is when he devised a plan to help the hundreds of homeowners along the lake with stranded boats.

"How do we help people get their boats off in the lake? Being that none of their cables are long enough to reach the water. So we've got to go in and extend cables where boats can float, and then find an access point to get them out," Bryant said.

So far, he has successfully gotten several boats and jet skis out of their lifts. However, supplemental income is only a temporary fix for Bryant and his employees. Once all the boats are back on land, he will be out of work if he stays on Lake Dunlap.

"Once that's done, the next option for me is to leave the lake and go to another lake in Texas. Go to Livingston go to LBJ, go somewhere else because I will not have enough work for two crews, and two pieces of equipment," Bryant said. "I will have to make that decision once all the boats that I can help people get out are out.”

For now, Bryant says he will have a steady income as long as the Army Corps of Engineers keeps a steady flow running into Lake Dunlap from Canyon Lake.

The agency reduced the flow during the Memorial Day weekend holiday and is expected to start releasing water again this week.

Life along Lake Dunlap has changed for residents and businesses after the spill gate failure. (Spectrum News)