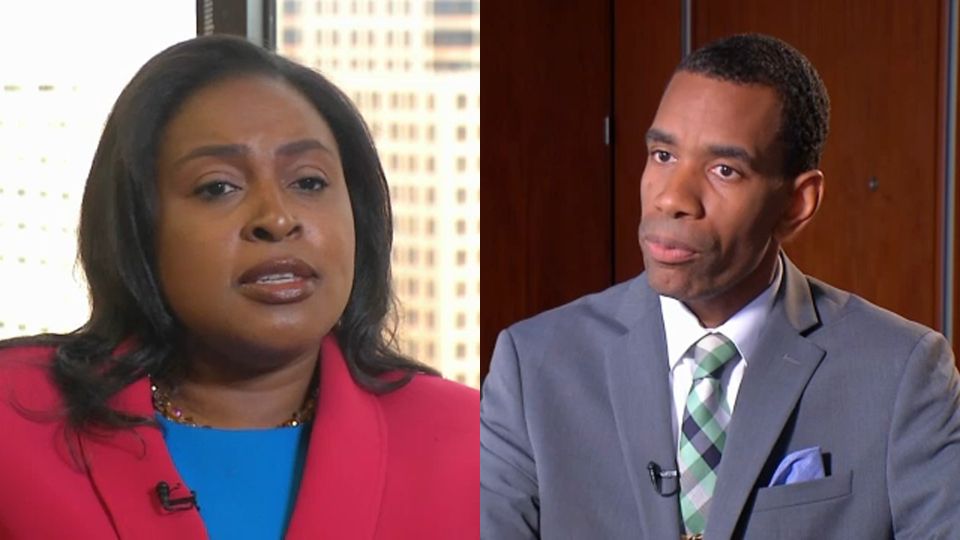 Lovely Warren, Malik Evans discuss the issues in the race for Rochester mayor

The third largest city in New York, Rochester, is gearing up for the Democratic mayoral primary in just a few days.

The incumbent in the race, Mayor Lovely Warren, is being challenged by Rochester City Council member Malik Evans.

Warren was first elected in 2014, when she became the first female mayor of the city.

Evans won his city council seat in 2017 and also works for ESL Federal Credit Union. Previously, Evans served on the Rochester Board of Education.

It is no surprise that in a city like Rochester, one of the top issues in the race is police reform.

Following the death of Daniel Prude, there have been increased calls for police accountability and transparency.

Here are how the two mayoral candidates, Mayor Lovely Warren and Malik Evans say they would tackle this issue.

Warren: "It is important for officers to be able to be out there on the streets, face to face, not just in police cars but walking. But also there's a community component, because community policing is not just the police department alone. It's also the community stepping up providing information."

Evans: "What we need in Rochester is a cultural change in the police department. We need to make sure that our officers are operating as guardians and not warriors, and that's going to take some time. I think that some of the things that came out of the executive orders that you saw (cities) do across the state, that's good, but that's an executive order. The proof will be in the pudding. The key will be the implementation."

Over the past year, there has been a rise in gun violence in Rochester, as seen in many of the major cities across the state. Just this year alone, there have been over 100 shootings.

Here is how the candidates would handle the rise in crime.

Evans: "Eighty-five of those shootings have been individuals under the age of 25. If you look at almost a half a dozen of school aged children as children under the age of 18 are the ones that have been the victims of gun crime. So what can we do to disrupt that so they would not want to put up a gun? So we talked about youth development programs, mainly a large-scale youth to work program is what we're calling it, where every single person, between the ages of 13 to 18 if they want to work in Rochester, we want to make sure that we give them a job."

Warren: "There is no one thing that is going to change everything. I think that first we need to deal with root causes of crime and that is a failed education system. And you know what we're seeing and what we know is that people that did not have access to a quality education most of their lives are the ones that's making these choices to commit these vicious acts on our street.

On March 23, 2020, Rochester Police officers placed a mesh hood over Daniel Prude's head and pressed him to the pavement until he lost consciousness. Seven days later, Prude died at the hospital.

However, it took almost six months, on September 2, 2020, for the circumstances surrounding Prude's death to be released to the public, sparking outrage in the community.

Warren was criticized by some for how she handled the Prude’s death, although the city’s Office of Public Integrity concluded no wrongdoing had been committed by any city employee.

Evans: "The first thing I would have done is told the truth and publicize it to the community. While all the details may not have been known, whenever a person dies in police custody, from a transparency standpoint, you have to let that be known. You may have to say, hey, we had someone die in police custody, it is now under investigation. But the problem with the Daniel Prude case was a person died in police custody in March and people did not find out about it until September."

Rochester has one of the highest unemployment rates in the country, and building back after the pandemic is one of the many challenges facing this city and this city's next mayor.

Warren for the past seven years has been at the forefront increasing development and tackling affordable housing. Something she says she plans to expand on if re-elected.

Evans says his agenda is centered on small businesses, which will bring in new jobs and encourage the younger generation to stay in Rochester.

On rebuilding the economy:

Warren: "Over the next four years, one of the things that we want to bring to fruition is really helping people that are 60% below the AMI to be able to purchase a home. Right now these individuals are paying more in rent than they would be paying with the mortgage. And I just find it absolutely wrong, that banks would give the same people a $60,000 car loan, but won't get them a $60,000 mortgage."

This race is not without its controversy.

Warren was indicted in October for allegedly breaking campaign finance rules during her 2017 re-election campaign. Her husband is also facing federal drug charges.

Warren says she can assure voters she is still focused on leading this city. Evans says he is concentrating on his own campaign.

Warren: "What the voters can be assured of is that number one, I'm innocent. And I am sure that once the facts are released and all of the evidence is put forth that I will be acquitted because I've done nothing wrong."

The first day of early voting is this Saturday, June 12 and the Primary election is June 22.