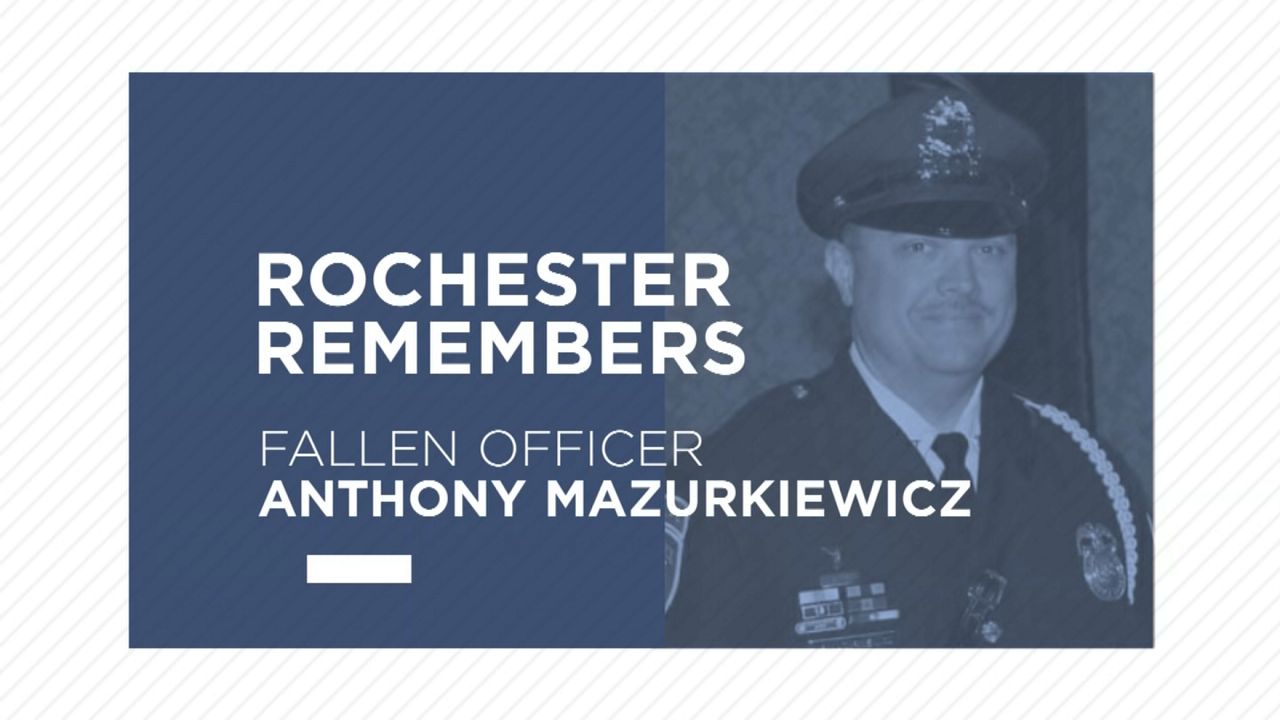 Members of law enforcement from across the state were in Rochester to pay their respects.

Mazurkiewicz was shot and killed on July 21 in the line of duty. His partner was wounded in what investigators say was an ambush attack. A teenage girl was also hit by a bullet while inside her home.

Police officers, sheriffs deputies and state troopers from all over our region are arriving for funeral services for RPD Ofc. Anthony Mazurkiewicz. @SPECNews1ROC pic.twitter.com/tyEyevEF9u

Thousands paid their respects to Mazurkiewicz at his calling hours in Perinton on Sunday. An even greater show of support was expected for his funeral at noon at the Blue Cross Arena.

Law enforcement officers pledge to serve the public good, and Officer Mazurkiewicz did that for the city for 29 years.

Mazurkiewicz was well respected and loved by his fellow brothers and sisters in blue who have been able to pay their respects at the Public Safety Building, where the flag-draped casket carrying Mazurkiewicz's body lies in honor following calling hours on Sunday.

"It's a day that we need to recognize the sacrifice for law enforcement officers and other public servants," said Monroe County Sheriff Todd Baxter. "We do that with a lot of dignity, a lot of honor. And that's for a reason, to let the public know and let the community know that this is an honorable profession, this is filled with nobility. And when we lose one of our own we send that person off with as much dignity and honor and respect as we can. We are so appreciative of the community. The community has just come out in droves over the last week. Whether it's the procession last night or the blue lights all over the county of Monroe as you see when you're driving around, it's just a great statement of recognition."

In his hometown, the village of Fairport in the town of Perinton, people lined the procession route Sunday night to light Perinton blue in honor of him. Residents took time to pay their respects.

A sea of brothers and sisters in blue is awaiting, as officer Mazurkiewicz’s procession will begin shortly. @SPECNews1ROC pic.twitter.com/U7miSLX0br

Many of them are reflecting on his service and sharing thoughts for his family, his wife and children.

"I think it's a great thing to get out and let everyone, let the family see the support we're giving them and hopefully this will ease their unforgiving godless act that happened to this family," said Sal Scarantino of Fairport.

"These guys are heroes," said Denise Ruby of Fairport. "I mean, the police force is heroes to us, and so we value our community here and the safety of our community."

"It's a tight-knit community," said Karyn Rando of Fairport. "We're close, we pull together when we need to. We're here for each other. It's a great place to live and I'm proud to say I live in Fairport."

Close friends, family members and hundreds of police officers, sheriff deputies, state troopers and dignitaries will gather Monday for a procession from the Public Safety Building to the Blue Cross Arena for the funeral. The service will be followed by an honor ceremony outside with a flag presentation to his family. "Taps" will be played, and there will be a 21-gun salute and helicopter flyover.

Following the services in the city, there will be another procession from downtown Rochester to White Haven Memorial Park in Pittsford for a private graveside service.