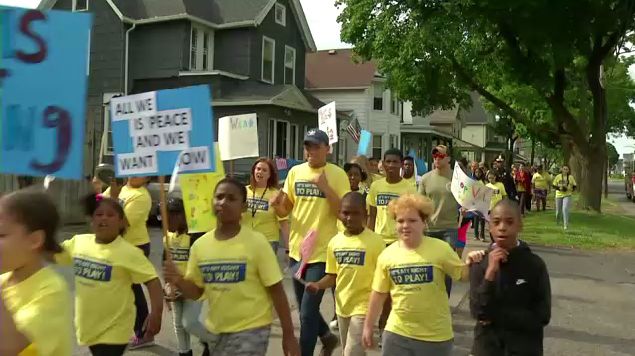 After tragedy, children walk for peace and safer neighborhoods

Children at Cameron Community Ministries After School Program participated in the 6th annual Peace Walk on Wednesday in the Lyell Otis neighborhood.

They walked for peace and for the right to play in a safe neighborhood. They stopped near the home of 3-year-old Amir Pallet, who was killed in a hit-and-run on Lyell Ave. on Saturday.

“I smiled for the first time. I haven’t smiled in a long time since my baby's been gone and they just brought so much joy to my life, they really did,” said Sophia Benitez, Amir’s mother.

Kids and staff created the walk in response to a string of shootings in 2013 that kept them from playing outside. Their objective is to promote peace so they can live in a world without fear of playing outside.

“The goal is to represent peace and spread the message around the world so that in the future they may represent more peace. No more violence, no more gunshots and no more kids losing their lives,” said 10-year-old Kalee Vo.

“Kids want to play safe outside, we don’t want kids to just be getting hurt outside while they’re trying to live life and have fun and be a kid,” said 12-year-old Ysland Brown.

“A little child just lost his life playing outside, so we’re walking today with him in our hearts and our minds,” said Katherine Sime, Cameron Youth Programs Director.

According to Healthi Kids Coalition, children who live in the Lyell Otis neighborhood experience a violent crime rate that is 60 percent higher than the rest of the city, and 6.5 times higher than the suburbs.

“They shouldn’t have to hide in a community center to enjoy themselves. My son wasn’t even in the street. He was sitting on his steps in his porch. We shouldn’t have to worry about stuff like that, but we do. That’s what the world is coming to now,” added Benitez.