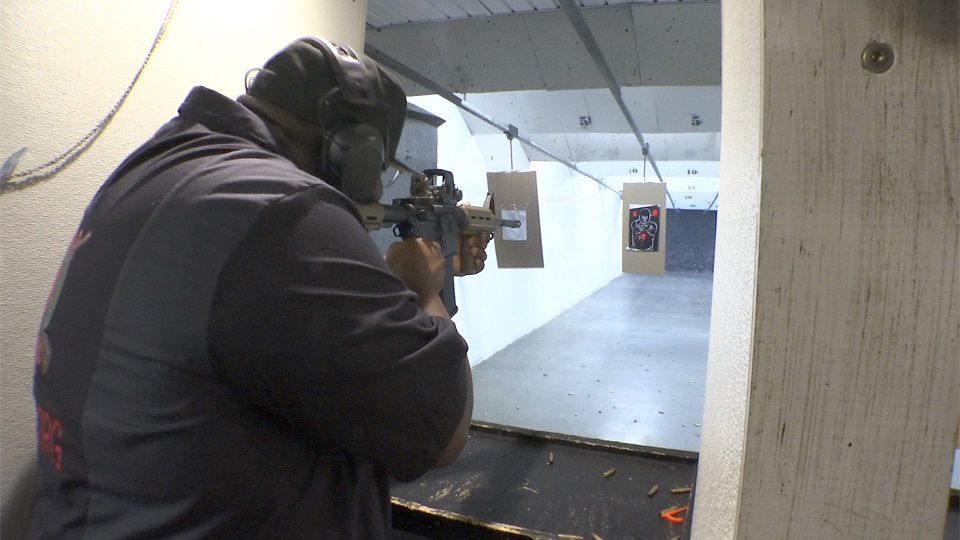 'We exist because we need to,' says founder of Rochester's first Black-owned gun club

ROCHESTER, N.Y. — A big spike in gun sales among the Black community in the United States has prompted a similar jump in the number of groups promoting responsible gun ownership. It led to the formation of a Rochester group whose members say they are up to the challenge of meeting that goal while trying to change some misperceptions.

As he pulled the trigger on his pistol during a recent evening at The Firing Pin, a gun shop and range in Bergen, Genesee County, Paul Adell Jr. explained what drew him in.

“The shooting experience itself, it’s exhilarating,” said Adell. “That’s the beauty of shooting. It’s a sport.”

One which in 2019 led to the formation of a new group, formed out of the love and respect of guns.

“The conversation sparked, you know, who's going to train these folks?” he said. “Do they know and have the information that they need?”

The Rochester African-American Firearms Association now has about 40 members. It is Rochester’s first Black-owned gun club.

“We want you to understand that you don't always have to use your firearm,” said Mark Cochrane, a firearms instructor who is retired from the Monroe County Sheriff’s Office. “But if you do have to, you should be confident and proficient.”

RAAFA promotes not just gun safety and proficiency, but also self-defense and de-escalation tactics. Its members are drawn to the club for a number of reasons.

“I knew that I wanted to be able to keep my household safe,“ said Jasmine Barksdale.

“It’s almost like a family,” added Quinn Lawrence. “They welcome you here.”

There is also the social aspect. The camaraderie of belonging to a club of like-minded people. But safe and responsible gun ownership is the biggest reason for RAAFA’s existence.

“The question, a lot of time gets asked is, well, why do African-Americans need a gun club?” Said Adell. “I think the answer to that is simple. I think that we exist because we need to.”

Group members say a rise in Rochester crime created the need not just for self-defense — but ways to de-escalate potential bad situations.

“In a little bit of time, I’ve learned so much,” said Briana Jones. “And I’m appreciative for it.”

“I know that we've anticipated some pushback, but we haven't seen much of that,” said Lawrence. “It’s probably because we got guns.”

A response which brought laughter from the group. In seriousness, the social aspect of the club includes the belief by many members that New York’s strict firearm laws put responsible gun owners at a disadvantage.

“Basically, the SAFE Act has put people in New York outnumbered and outgunned,” said Michael Nix, who co-founded the group with Adell. “We obey the law. However, the bad guy does not obey the law.”

Rochester African-American Firearms Association members say they are also looking to break down stereotypes in their community.

“I think the need for this is to show that the Second Amendment is for everybody,” said Lawrence.

A club of straight shooters with a message right on target.