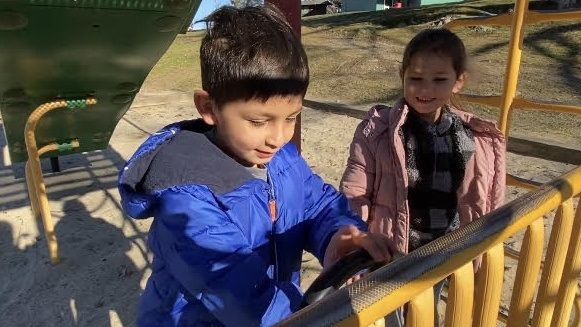 If you would have told Ahmad a few months ago that he’d be watching his children frolic at a park in New York, he probably wouldn’t believe you.

"It's not easy to describe in words what we have been through," said Ahmad.

In August, he and his family of seven were in Kabul, Afghanistan, living in terror as the Taliban took over the city. Ahmad asked to not show his face and disguise his voice to protect the safety of his family.

He worked for an international organization in Afghanistan. His family pleaded for him to evacuate out of fear he could be captured by the Taliban, or worse.

"We took a chance, we risked our whole life, even I risked my family life," said Ahmad. "Because it was over for us in Kabul, living for us, it was over in Afghanistan, especially under the shadow of the Taliban flag. The dream that I had for my children and the life that I want them to live, it was slowly fading away."

So they decided to evacuate.

Ahmad took a cell phone video as his wife and their five children pushed through crowds outside the Kabul airport for three nights.

They were finally allowed inside. His children rested on the ground as they waited to board a U.S. military plane to Qatar, then finally on to a military base in Wisconsin.

At the base, Ahmad got connected with the Afghan Refugee Housing Network, a group that helps Afghan refugee families resettle in the United States.

Shortly after, he found out his family was being sponsored by an organization in New Paltz called New Paltz For Refugees. The family took a plane to Newark airport and their new life.​

"People were waiting in the airport and they hugged us," said Ahmad. "They were so happy that we were there."

New Paltz For Refugees is made up of volunteers like Beth Glace, who formed the group with Robert Sabuda in October. In just a month, the family was moving in.

"I think most Americans felt helpless when we watched those newscasts in August and so many wanted to do something, but we didn't know what to do," said Glace.

So they put a call out on Next Door and other social media apps for donations for the family. The response was overwhelming.

Donations of clothes, supplies and money poured in.​ Airbnb even donated a one-month stay in a home for the family. Others donated their time driving the family to appointments, taking them to the supermarket and even taking the kids to soccer practice.

While volunteer Barbara Nieman is helping Ahmed register the children for school in the New Paltz school district, other volunteers give the family weekly English lessons and are helping Ahmad fix up his resume so he can apply for jobs.

In big ways and small, community members are coming together to make sure this family lands softly in the United States.

"Everybody just wants to help us, so we are very much lucky to be here in this community," said Ahmad. "My decision was just to get out of the country and make a life for my children."