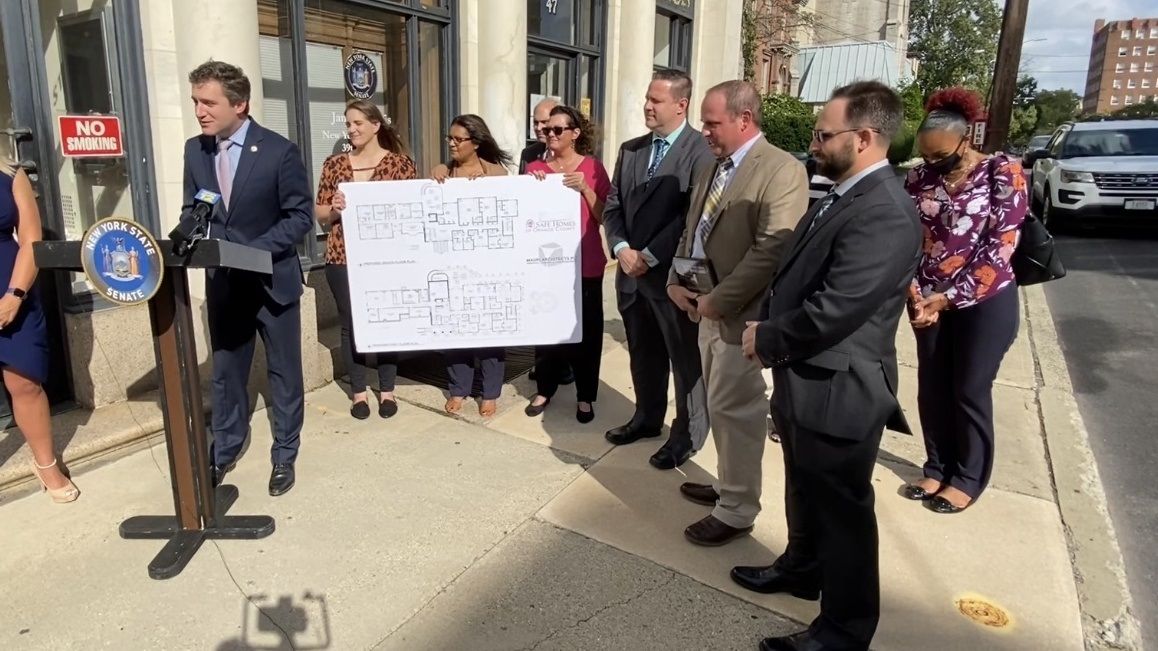 New domestic violence shelter to open in the Hudson Valley

Kristen Detheridge of the domestic violence resource center Fearless! Hudson Valley can relate to the people she helps.

“Actually, I’m a survivor myself,” said Detheridge, who is now the marketing and communications director for the nonprofit. “I started out with Fearless! volunteering and just fell in love with people.”

Detheridge said the demand for services from Fearless! has increased during the COVID-19 pandemic.

Detheridge and her colleagues appeared outside the Newburgh office of State Senator James Skoufis Thursday morning to share their plans to nearly double shelter space for domestic abuse survivors and their children who have suffered through various forms of abuse.

“Domestic violence is not just physical violence,” Detheridge said. “It can be mental, emotional and economical.”

Fearless! Associate Director Sarita Green said the new shelter offers more space, but also more privacy, which is important to help someone in recovering from trauma.

Construction at the Orange County shelter site is complete, Fearless! staff said. They could not say specifically where the shelter is located, per a New York State social services law. Green said construction of new living space for domestic abuse survivors is unusual, but much better than the more common practice of renovating residential buildings.

“So you’re really restricted with the space within those settings, and trying to make it work the best you can, which we do currently in our existing shelter,” Green said.

The new shelter will bring the organization’s total number of beds to 37. It's been outfitted with couches, televisions and gaming chairs in the teen room.

Skoufis secured $125,000 to pay for the furnishings, and celebrated the completion of the project during a press conference with Fearless! staff and the project’s architects.

There has been a significant increase of domestic violence in the state and around the country,” Skoufis said. “The work that Fearless! has done over this time has never been more important.”

The director of Fearless! said the group is just about ready to open the new shelter. The space is licensed, has a certificate of occupancy and is fully furnished.

Fearless!, though, still needs to hire at least 12 employees before opening the shelter. The director said she hopes those positions will be filled in the coming weeks.