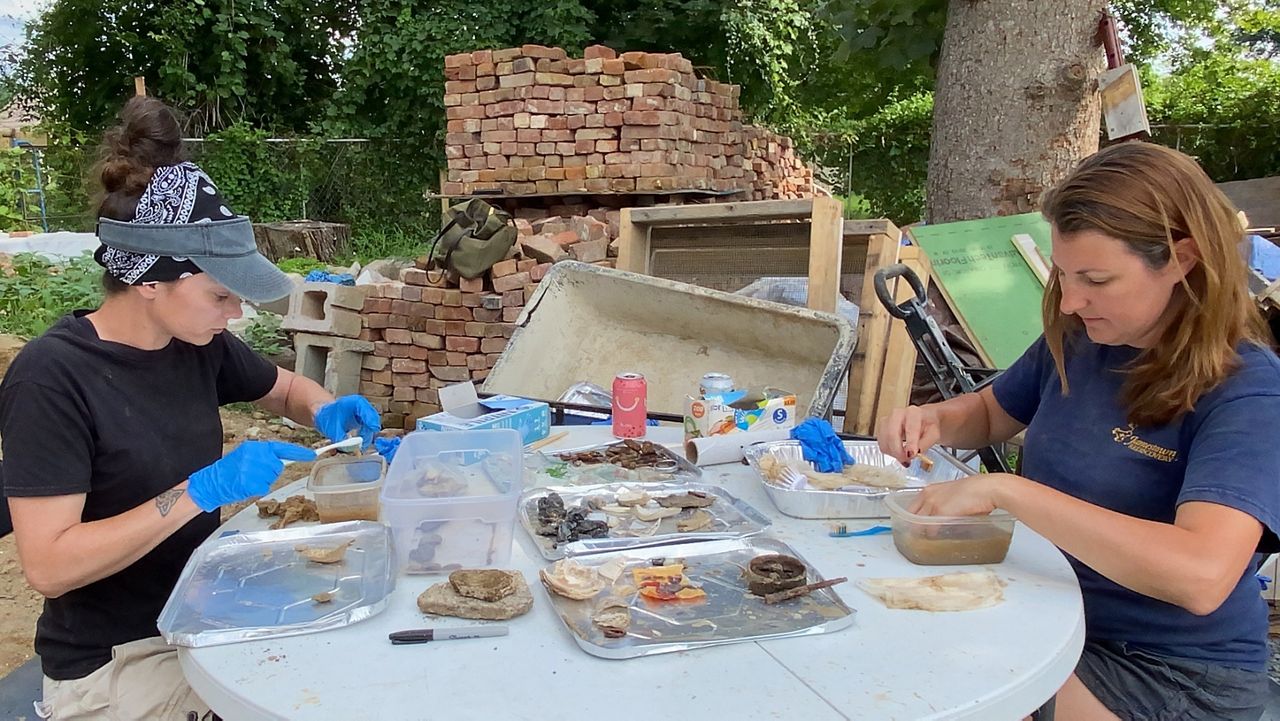 With every shake, shovel and brush, volunteers at 326 Liberty St., are uncovering a piece of Newburgh’s more than 300-year history.

For hours a day, they dig through nearly 10 tons of dirt, sifting and cleaning artifacts they find along the way.

This all started when Thomas Dodd bought a historic building on the street, once home to Weigand's Tavern.

"Weigand's Tavern has a long history of being where a lot of people would come and meet," said Dodd. "It was rumored to be where George Washington would hang out, but we think that that was the previous building, which was two blocks to the north of here."

Dodd is restoring the building to what it looked like in the 1830s. But when they started to excavate the foundation of the building, they noticed something.

"We noticed little shards of pottery and stuff like that, so I felt like, you know, that maybe there's something in this soil that’s important," said Dodd.

So he called in Orange County historian Johanna Yaun, and they got together a group of volunteers to embark on a community-run archaeological dig of the site.

"The city of Newburgh was founded in 1709 by a group of Palatine German refugees," said Yaun. "As were going through this process of exploring the dirt that’s here on this property, we're not just finding things that relate to this building itself, we're finding things that span that 300 years of history going back to 1709."

Yaun starts by shoveling some of the dirt into a bucket. She then transfers the dirt to a volunteer using a large tray sifter to search through to find anything that might stand out.

Volunteer Hael Fisher lives across the street from the dig site and decided to join in.

"In a way, I think it's kind of cool to think you walked in the footsteps, so to speak, of George Washington," said Fisher. "I think knowing what a city has experienced is really the only way that it can, like, improve itself and renew."

Next the pieces get cleaned off.

Archaeologist Kristen Clyne-Lehmann brushes each artifact meticulously with a toothbrush and water. Right now, they're just taking the artifacts that have come out of the dirt and cleaning them up a bit.

"Very often, at least in my work, you dig a whole bunch of holes and you don’t find anything, so this has just been really exciting for me as an archaeologist, for me to just see such a large volume of artifacts," said Clyne-Lehmann.

Each piece helps to tell the story of the people who lived here centuries ago. They've found meat bones, oyster shells, the sole of someone’s shoe and even a bar token.

Once they catalog all of the items they’ve found, they’ll be able to piece together a full picture of what life was like here for the city’s earliest residents.

"To me it's very exciting. It looks like little bits of nothing, but all together, it tells a story," said Clyne-Lehmann.