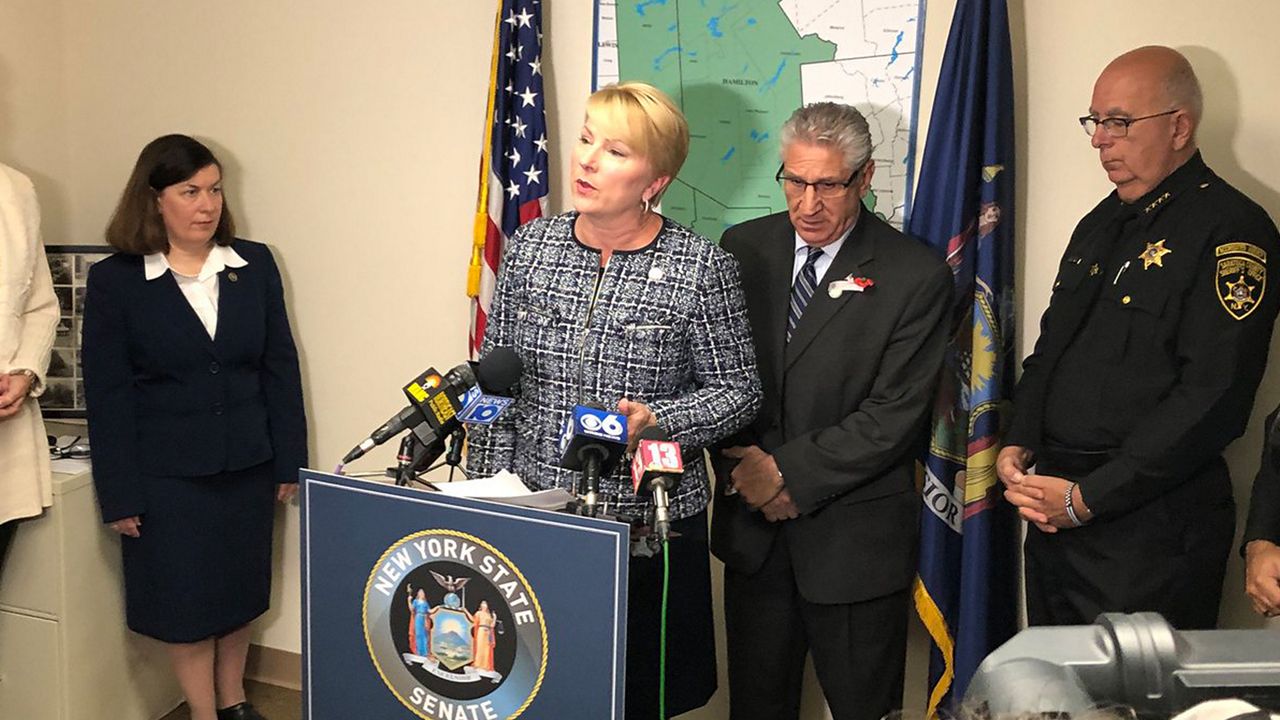 Lawmakers, law enforcement officials and advocates gathered at State Senator Jim Tedisco’s office in Clifton Park on Tuesday morning to call for more consideration on the new cash bail and discovery laws set to go into effect on January 1.

They say the laws were passed in the 11th hour, in the middle of the night on April 1. Zurlo says eliminating cash bail on more than 200 offenses is going to create additional work for his deputies and take away from public safety. He's calling on other lawmakers to take their circumstances into consideration.

"Confer with law enforcement," Zurlo said. "This was kind of pushed down our throats."

Zurlo says in his county alone, he has about 300 active warrants on offenders who skipped court appearances. Deputies are tasked with looking for them.

"Our road patrol is maxed," Zurlo said. "Once this starts after the first of the year, with the staff I have, a lot of these people are gonna be out there, and we're not gonna be able to locate them."

@SheriffZurlo says he has 300 active warrants for offenders already on the run. Says this law will create additional issues for local law enforcement as well. Says changes have been basically “shoved down our throats.” @SPECNewsAlbany pic.twitter.com/Yy44rKgC16

Tedisco and Walsh say they would like these laws repealed altogether, as they allow offenders of crimes such as second degree manslaughter, aggravated vehicular homicide, and criminally negligent homicide to walk without paying bail. They’ll be given an appearance ticket and asked to come back to court, which law enforcement is concerned will just encourage offenders to run.

Also in attendance were the parents of Chris Stewart, the Shenendahowa student who was killed by a drunk driver in 2012. The pair also advocated against the reforms during session. The driver in that case, Dennis Drue, was charged with vehicular homicide, which is one of the serious charges that an appearance ticket will be issued with bail waived, starting Jan. 1.

Michael and Regina Stewart say it's unfair to victims' families.

"We're all for changes, but let's not be hasty in making these changes and forcing them through," said Regina Stewart.

Regina says in the case of Chris’ accident if this law had been in place, “The offender would’ve been ticketed with no bail, and told to come back at a later date.... it’s not OK for the family at home suffering.” @SPECNewsAlbany pic.twitter.com/kpmS0RWFJt

Michael Stewart hopes legislators will listen to their message again.

"Come back for another session to think this through," Michael Stewart said. "Have them stand in our shoes, our family's shoes, for one day. I can guarantee you they'd have a different perspective."

Thanksgiving Eve is fast approaching, one of the busiest nights for bars each year. Michael Stewart says if the law goes into effect next year, he doesn't want anyone who's out drinking and driving getting an appearance ticket.

On top of eliminating cash bail, Heggen says the reform put a major burden on prosecutors across the state.

"The amount of workload in my office alone is going to more than quadruple when it comes to felonies in this county," Heggen said, "and as it relates to the misdemeanor work that we’re going to have to provide, I’m going to have to be having to provide more than 85 percent more information within 15 days."

The new discovery law allows defense discovery without having to make a motion for it. Heggen says if the DA's office doesn't provide it within the 15 days after arraignment, the prosecution may be precluded from using it.

"That time period of 15 days and having to do it in every single case is a challenge that has put solely on the backs of local governments," Heggen said.

This group says there are additional challenges including allowing defense attorneys and their clients to have access to victims' names and address, as well as access to crime scenes.

Under the law, bail was eliminated for many serious crimes such as second degree manslaughter, criminally negligent homicide, aggravated vehicular homicide, making a terroristic threat, criminal possession of a gun on school property, some felony drug offenses and crimes against children, and several domestic violence charges.

We reached out to the governor's office for comment. Spokesperson Jason Conwall issued this statement: “Republican Governor Chris Christie passed essentially the same bail reform laws years ago in New Jersey and their state reports have shown that overall crime has decreased with no statistically significant changes regarding re-offenses or court appearances. Politicians taking cues from Trump's cheap fearmongering should knock it off and focus on the facts."

Schenectady County District Attorney Robert Carney, a Democrat, is also speaking out in favor of the special session, issuing this statement: "These sweeping criminal justice reforms were enacted in the budget without any input from the professionals who work in the criminal justice system: police, prosecutors, defenders, and judges. Although we are planning for these changes, I question our ability to meet these new mandates with the resources and limited time left before they take effect.  A one year moratorium to study these impacts and to educate New Yorkers about how these laws will affect everyone is an excellent idea."