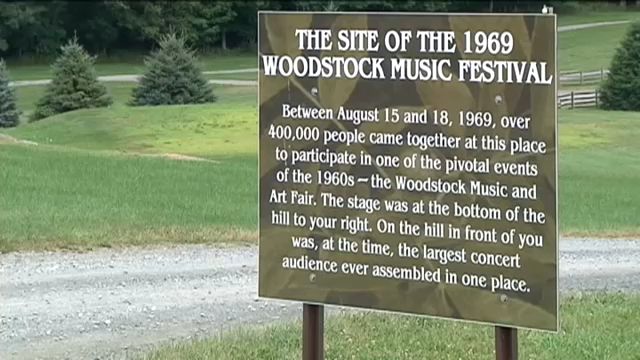 DOT: Woodstock's 50th Will Have No Traffic Impact From Construction

For the 50th anniversary of the Woodstock music festival, residents in Bethel are concerned about a construction project. The Department of Transportation responded to an inquiry from Spectrum News Friday.

"Once the project begins, two lanes will be maintained to minimize impacts to summer seasonal traffic and no work impacting traffic will occur on August 16 to August 18 in order to accommodate Woodstock 50. We will speak with the Supervisor regarding his concerns and provide the contractor’s schedule when the project is awarded, which is expected to occur in May," the DOT said.

As the Sullivan County town prepares for the summer tourist season, Woodstock's 50th anniversary is on everyone's mind, where thousands of people are expected to mark the iconic festival at Bethel Woods.

"Every weekend, they practically have some kind of event, as well as what the town has planned; we have a parade for the Woodstock anniversary, we have Woodstock-themed events," said Bethel Town Supervisor Daniel Sturm.

Prior to the DOT's statement, Sturm told us he has concerns with how the culvert construction project — set to begin in just a few months — would impact traffic. The DOT assures there would be no impact to traffic, and all roads around the area will stay open.

"It kind of feels like they're trying to shut the 50th anniversary down before it even starts. If you pull into the town of Bethel and the first thing you see is a stop sign, a detour sign, or some orange cones, I don't think it's very welcoming," Sturm said.

Brother Bruno's restaurant sits right next to this construction site. Lisa Jones, the manager, also has concerns about the off-putting environment of a construction zone.

"Summer is everybody's busy season around here. If they start this construction in the summer time, we're losing out on our summer business," Jones said.

The town says they are grateful the roadwork is being done, but they just want it postponed to next year.