It's still early on a cold, winter Sunday morning, but Mike Kitts is heading to work.

He's not a man of the cloth. He's a guy who wears stripes for a living, a college basketball official. So Sunday's not a day of rest. Sunday is game day, and just another "day in the life."

"This is my fourth game in four days," said Kitts, as he made his way inside SEFCU Arena in Albany for a matinee affair pitting the Great Danes against Stony Brook.

Mike spends a lot of time on the road this time of year, and inside gymnasiums where he's never on the home team. It's not easy, but Mike said he really didn't have a choice.

"I love the game, and my dad, he got me into it pretty young, watching him do it my whole life," he said. "It kind of runs in the family, I guess." 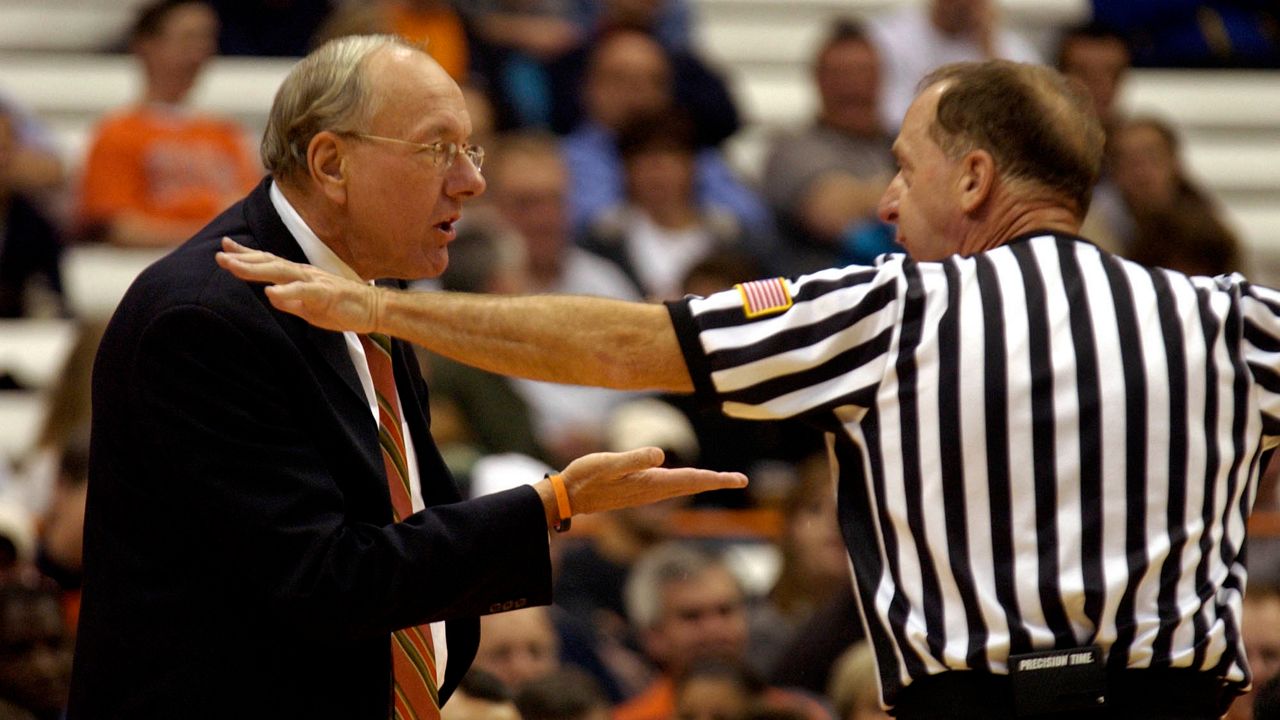 Syracuse head coach Jim Boeheim argues with referee Mike Kitts during the first half of an exhibition game against Saint Rose in Syracuse, N.Y., Tuesday, Nov. 1, 2005. Kitts ended up ejecting Boeheim from the game. (AP Photo)

Mike Kitts Sr. was a college basketball official for more than 30 years, working 19 NCAA tournaments and four Final Fours. But, he's best known around Central New York for throwing SU coach Jim Boeheim out of an exhibition game, his first career ejection back in 2005, with young Mike Jr. sitting in the stands.

"I do remember going to school the next day, and teachers and the whole school was like, 'how can your dad do that?'" Mike Jr. recalled. "I don't know. I took it on the chin and kept it moving."

And eventually, he became one of them, and now Mike is moving his way up the ranks of college basketball. He's in his fifth season of Division 1, and the most bizarre season in college basketball history played in a global pandemic.

The officials are wearing facemasks, and there are few to no fans in the stands booing the calls he makes, and the ones he doesn't make. But, believe it or not, Mike said they're missed.

"You do miss the fans. It is fun, sometimes they come up with some good things they say that make you laugh a little," Kitts said. "Also, with the coaches, they say things too, and a lot of times the fans can kind of mute the things you don't want to hear."

One guy he hears from every week is his dad, who's also now his boss. Mike Sr. is a supervisor of officials, and he's his son's toughest critic.

"He likes to think he's a 10," said Kitts Sr. when asked where his son is on a scale of 1 to 10 as a college basketball official. "He's about seven and a half right now, but I like his attitude, and he thinks he should be getting better games than what he's getting. But it's a process. You don't want to get there too soon because if you get there too soon and you're not ready, you fall flat on your face. So, he needs to just let me be the judge of that, and just go out and referee the games I give him."

Mikev Sr. makes his winter home in Florida, where he follows Jr.'s progress on the internet. Junior's job is to make his boss happy, and his papa proud.

"[Coaches] never give me anything. 'You're not as good as your dad', those are things I haven't heard yet," said the younger Kitts, who just turned 30 last month. "Thankfully so, because those are things that could result in technical fouls, and I don't love to give those out. So, my work speaks for itself a lot of the time, and hopefully, I can continue to try and get better. That's all I'm trying to do."

And his next opportunity to do so will be in Daytona Beach, Florida next week when he's working the CBI tournament. It's not the NCAA yet, but it's another step in the right direction as Junior tries to live up to the family legacy.