Will the Micron deal impact the race for NY-22?

The announcement earlier this month of Micron’s $100 billion investment in a chip manufacturing facility in Central New York has been lauded by politicians of both parties and all office levels.

President Joe Biden will visit the region on Thursday to add his voice to that choir.

For Democrats running for office this cycle, the Micron announcement is a piece of positive economic news as the cost of living and inflation remain heavy on voters’ minds with the midterm elections just two weeks away.

Indeed, the Micron investment in the Syracuse area was announced by U.S. Senate Majority Leader Chuck Schumer, who is himself up for re-election this year. Over the summer, Schumer spearheaded the passage of the CHIPS and Science Act — a law the Micron CEO said was “essential” in their decision to make the investment in Central New York.

The new 22nd Congressional District is the home of the future facility. The race for the open seat is a closely watched and competitive one between Republican Brandon Williams and Democrat Francis Conole. Whether the Micron investment plays a role in the race is a compelling question for a region that has had its own share of economic hard times for decades.

“That is such a huge piece of news for the region. I mean you’re talking about an investment by a company that really is larger than our economy in a lot of respects,” said Grant Reeher, director of the Campbell Public Affairs Institute and professor of political science at Syracuse University’s Maxwell School of Citizenship and Public Affairs. 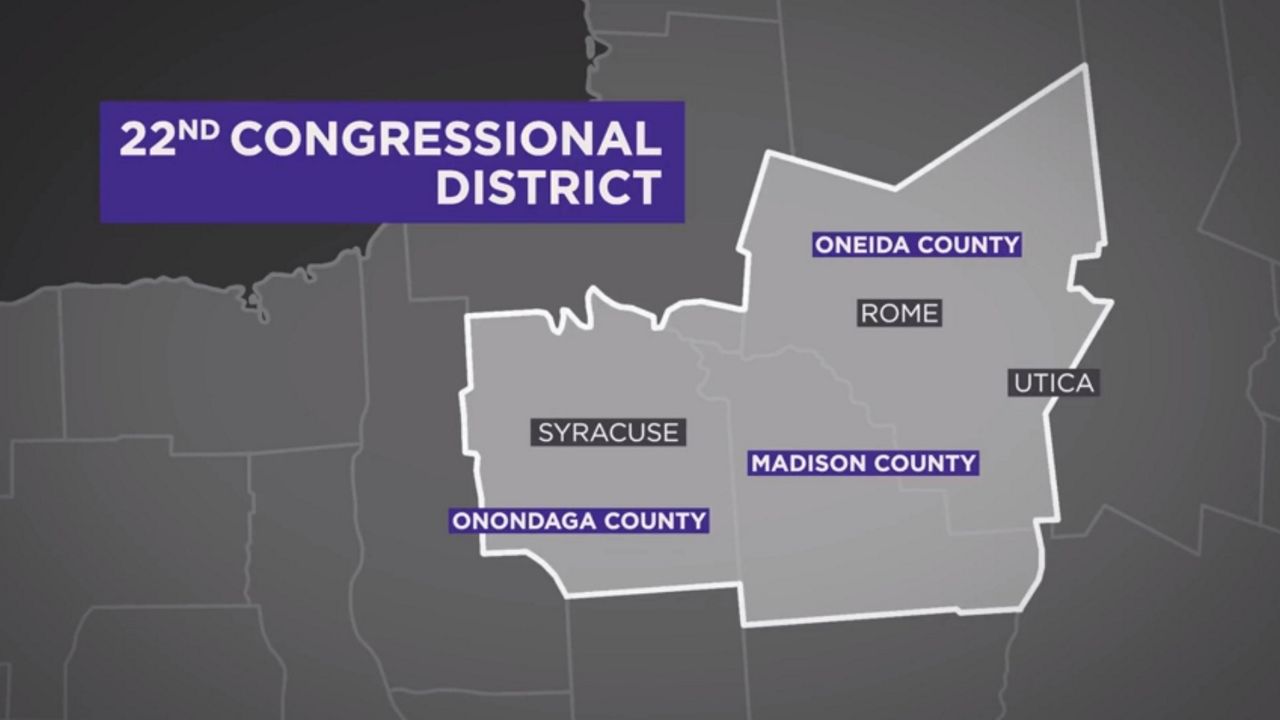 Micron plans to build a new megafab in Clay, which is estimated to create tens of thousands of jobs for the region, including 9,000 direct positions.

Because Micron credits the CHIPS and Science Act — legislation that spends tens of billions of dollars to jumpstart the U.S.’s semiconductor industry that Democrats largely pushed through Congress — Democrats are quick to point that out.

“[Brandon] Williams was on record as opposing the federal, the recent federal legislation that they’re drawing on to have sealed the deal with Micron in terms of the federal support that’s going into this project,” Reeher said.

Williams, a founder of a software company, in a letter to the editor in the Auburn Citizen in August, called the CHIPS Act a “modest $50 billion corporate welfare package for the profitable chip industry.”

That stance got Williams and Conole into an exchange on Twitter when the Clay deal was announced. After Williams posted the news about Micron, Conole responded saying, “Brandon’s endorsers in Congress voted against the CHIPS bill that made this happen, and he remained silent as it passed. Now he wants to have it both ways.”

The 2 candidates running for the #NY22 seat trade barbs on Twitter over the Micron news in Central New York today. pic.twitter.com/8oiaCfoELM

Williams responded that “your endorsers in the county leg voted against the infrastructure and funding that made this deal possible.”

Conole supported the CHIPS Act and several times praised Schumer and Rep. John Katko, the retiring congressman who was one of only 24 House Republicans to support the legislation.

Reeher said he believed Williams’ opposition to CHIPS would hurt him in the wake of the Micron news, but he hasn’t seen much of a negative impact, and said there is an explanation for that.

“The response seems to be having some resonance, which is, OK, you know, Syracuse got lucky in this regard. And good for Syracuse and we’re all happy about it, but that doesn’t necessarily mean that this approach to economic development is a good one,” Reeher said.

That approach is the state’s system of luring companies to a high-tax, high-regulated state like New York and throwing tax breaks at them so they can locate to an area in which they otherwise wouldn’t want to.

“That is too complicated of a counterargument to make in the face of the fact that here’s this company that comes in and says it’s going to be a $100 billion over 20 years. I mean it’s just a mind boggling number. But it doesn’t seem to have hurt [Williams] and I don’t, you know, again, from what we can tell, Conole doesn’t seem to be really gaining a lot of traction by hammering him on that,” Reeher said.

Whether Biden’s visit to the region on Thursday will benefit Conole remains to be seen. A spokesperson for Conole's campaign told Spectrum News 1 that the Democrat has no plans to be a part of the visit since it is an official visit.