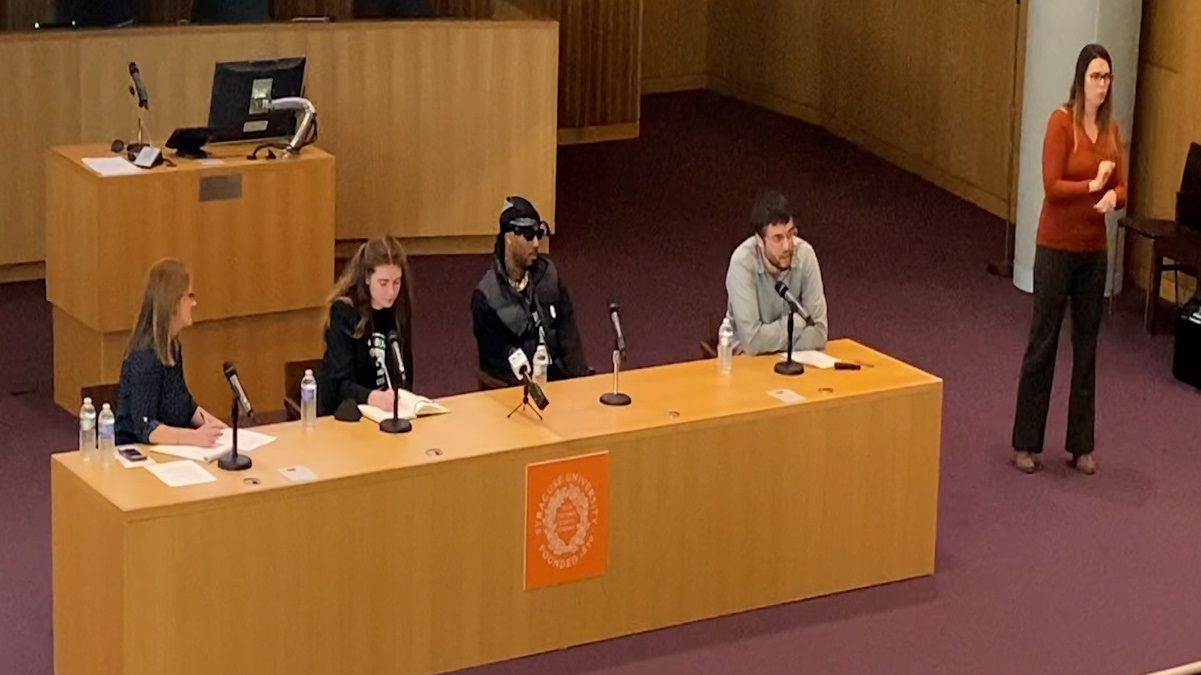 Unsafe working conditions, long hours and few breaks are just some of the reasons why workers choose to unionize, according to organizers who spoke Monday at Syracuse University.

Students and staff had a chance to listen to the president of the Amazon labor union and an organizer with Starbucks Workers United on Monday.

“I’ve seen workers get carried out on stretchers,” said Chris Smalls, Amazon labor union president. “When I see workers get inspired by the efforts that we’re doing, that continues to resonate with myself. I know that there’s a bigger purpose, and that’s what motivates me to continue going.”

Smalls was part of a panel Thursday in Syracuse University’s Lender Center for Social Justice. Speakers discussed unions and the struggle for racial and economic justice.

“I think just having these conversations with our neighbors and our family, that’s how we’re going to have to change how people use Amazon and view Amazon as a whole,” Smalls said.

His visit came days after a failed vote to unionize at an Amazon facility in the Capital Region.

Smalls said he won’t give up on that facility and the employees who did vote to unionize.

As for the Clay facility, Smalls said it’s fairly new and wants to give it time before pushing to unionize there.

“We want to give workers a chance to see the differences of being unionized and ununionized," he said. "So right now, we are still in the process of building behind the scenes and then when we’re ready, we’ll definitely have a campaign up here.”

Starbucks Workers United organizer Jaz Brisack also participated in the panel. She said Starbucks has “tried to create a culture of fear,” and believes the Armory Square’s permanent closure has to do with union busting.

“If workers speak about health and safety issues, ranging from a grease trap that’s been broken for 17 years to issues of lack of support for handling situations of overdose or other mental health issues, then Starbucks’ solution is just, ‘Then we’re going to close your store, especially if it’s one that’s talking about unionizing.' We have to keep fighting and building. It’s only a loss if we give up.”

Smalls and Brisack were also joined by the Cornell University School of Industrial and Labor Relations Labor Action Tracker’s director on the panel.

“We strongly disagree - the safety and wellbeing of our employees is our highest priority. Across our network we’ve invested billions of dollars in new safety measures and technologies to protect our employees," she said. "We’re committed to giving our employees the resources they need to be successful, creating time for regular breaks and a comfortable pace of work, and working directly with anyone who needs additional support to meet their goals."