The season of Lent, embodying a time of trial and sacrifice, took on an entirely new meaning for Catholics and Christians at the dawn of the pandemic.

It was Lent when churches were first shuttered under former Gov. Andrew Cuomo as the first coronavirus cases began to hit upstate New York, leaving the faithful no choice but to add church to a growing list of things they must give up.

Now two years later, the fulfillment of a season principled in fasting and penance may finally feel altogether fuller as churches will gather for Easter once more without any state-mandated restriction for the first time since 2019.

However, despite what feels like a new dawn in the age of the coronavirus, faith communities continue working to rebuild and call back the faithful to pre-pandemic standards.

As parishioner Linda Flynn described, Lent is a time to be called back to the faith, something that became altogether more difficult in lockdown.

“It was a real shock. Never in my life was I not able to go to church. Being raised Catholic, I never thought. We took so much for granted that we could go and then all the sudden the church was locked, and it was a real form of isolation. It came on quickly," said Linda Flynn, a member of Sacred Heart Church in Cicero.

Flynn has attended Sacred Heart Church in Cicero for eight years. Routinely attending daily Mass prior to the pandemic, she says the impact was felt beyond just Sundays.

“If you're a real follower of our faith and Jesus, you know He's always with you no matter what. If you can't make it to church, that's not the only place where He's at. And I think that became more of a reality [in the pandemic]. In that time, you had to renew that relationship yourself; you didn't have anyone else speaking to you about it," said Flynn.

At 73, Flynn said she found herself feeling somewhat anxious to return to church when the doors initially reopened; but as soon as they did, she was back in a pew.

"[The decision to close] was out of fear. Everything was driven from fear. We knew we had COVID; nobody wanted to get that, but that doesn't stop you from going to your Lord," said Flynn. "It was pivotal to go online or on Facebook to see a Mass or hear a homily. It's the holiest time of the year for our faith, so it had a huge impact. But, boy, did I take a lot for granted."

The practice of faith, while still held online, lacked a critical element of intimacy for Catholics for months on end, and it continues to do so for the more vulnerable groups today.

While virtual Masses were offered through many churches during the pandemic, including Sacred Heart, the issue at hand remained that Catholics were denied access to the Eucharist in the closures, a key component to their spiritual lives.

"That was awful. There's no substitute. You can't live stream that. It was a huge – I can't think of the vocabulary – there was this huge piece missing that we just couldn't substitute, sharing the Eucharist, which is the source and summit of our faith,” said Rev. Richard Prior of Sacred Heart Church.

"It's the culmination of what we believe in; the resurrection,” he continued. “It’s like, if Jesus didn't rise from the dead, we're wasting our time. If we can't celebrate that then it's just a huge waste of time."

The problem extended into June for Catholic worshippers in 2020, for while drive-in Masses were approved by the governor in May, many parishes did not offer them, leaving the path to communion blocked for months.

It was a gap in spiritual practice that extended far longer for residents in some local nursing home facilities.

Prior said he was not given clearance to celebrate in-person Mass at Buckley Landing and the Cottages at Garden Grove, two Loretto facilities in the Cicero area where he has served as the priest on-call, until about three months ago.

Loretto CNY’s vice president of mission says that the sacramental offering of communion has also only recently made its return.

“We didn’t have permission for communion for a long time. I don’t think I stopped asking, ‘When can we do communion?’ It felt like forever,” said Brenda McCutcheon, who also serves as director of recreation for Loretto CNY. “Two months ago, only two, I had permission to do communion for the first time in two years and I can’t even tell you, the looks on people’s faces just doing communion. It’s big, it’s big.”

It’s not the only significant change residents will see when practicing their faith. For Easter this year at the facilities, there will be egg coloring, in-house visits from families and the Easter bunny, congregate activities and flowers on the altar in the facility’s chapel, pruned to brighten a space that is finally open for an in-person Easter Sunday service – all for the first time since 2019.

“Last year we gave out ashes on a card, this year residents actually received them. We’re giving out palms this year. For the last two years we’ve had no in-person Easter services, this year we do. Residents who will not be able to go down can worship on the day with live streams, not just pre-recorded sessions. All of those pieces are significant changes to the way it once was,” said McCutcheon. 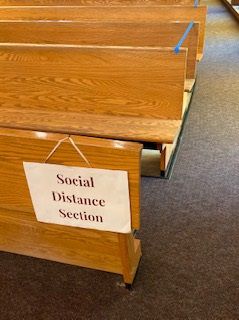 At Sacred Heart Church in Cicero, a socially distanced section remains to ensure those who may be more wary to attend Mass have space to be comfortable.

While churches may not feature the same social distance configurations, temperature checks, attendance caps, or mask mandates that they did up until the start of this year, there’s no reason to believe it is unsafe to return to church, according to Prior, the Sacred Heart priest.

"As far as I know there's never been any transference of COVID that can be linked to participation in Mass. Nobody has ever said anything to me or called. I haven't seen the data, but that's as far as I know,” said Prior.

What he does know, however, is that despite some initially discouraging numbers shown in a diocese-wide survey conducted this fall, his congregation’s attendance is on the rise, and it appears to be tied to the end of one particular guideline.

“In October the diocese does a count, so based on our October numbers, versus 2019 numbers, we were like 40% missing; 60% from where we were three years before,” said Prior. “That was when we still had the mask mandates. Once the mask mandates came off, it took a while, but I think we're moving very close to where we were before in terms of attendance. This is just eyeballing it, but I think we're getting close.”

As Easter approaches once more, the theme of the season transitions from penance and sacrifice to renewal and rejuvenation for the faithful following Lent, with Flynn saying it especially rings true this year.

​"What a huge celebration it is going to be to go back to church for Easter," said Flynn. "What a uniting factor that is. We're here from a higher power. Easter is such a refreshing rebirth of who we are and why we're here."

While more people are expected to return to their pews this Easter season, Flynn says she still feels a level of hesitancy among fellow seniors, but hopes to inspire the charge back, saying the end to the mask mandates invited more confidence for her.

“I'm 73. When I first returned, I wouldn't go into the center and I would distance and I would follow any protocol. I wouldn't not go because of it. Why would you deny yourself that? If you're told you can go to the grocery store, or the liquor store with a mask, why wouldn't you go to church with a mask on?" said Flynn. “I feel personally very comfortable the more that some of these restrictions come down.”

Regardless, she says she understands that everyone has their own comfort levels and she looks forward to continuing to reach out to seniors and remind them that the church will be waiting for them when they are ready.

"It is devastating what's happened to the seniors; the isolation. I would love to bring more people back. It’s just baby steps," said Flynn. “In conversations that I’ve had with our seniors, we’re hoping to start inviting them back to afternoon teas or restarting the senior lunches. As a whole, the evangelization committee is trying to reach out to anyone who is in our parish to make them feel like a community.”

Prior says the good news in lessons learned from the pandemic is that, hopefully, the doors of churches will never have to shutter again.

It’s a hope that he sees illuminated each week, looking around at a congregation reblooming under a love of their faith.

“[The pandemic] was a new experience for everyone, I get it, it's an experience none of us want to go through again [and] we're kind of still in the midst of it, but we survive,” Prior said. “We do believe in the resurrection – we're not going to do something irrational to put people at risk – but we shouldn't be afraid of death. We believe in something greater, and we're all reminded of that through this, I'd like to think.”