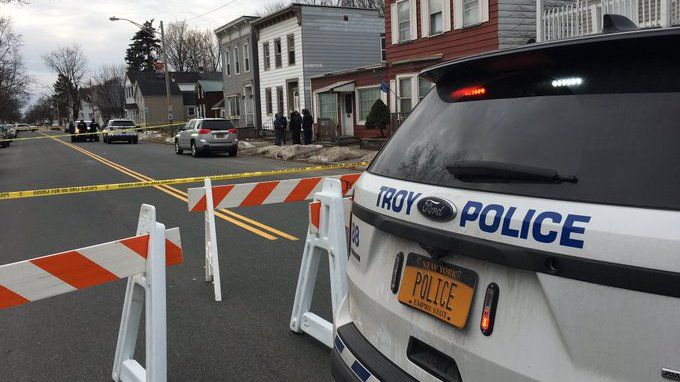 Troy police conduct an investigation into a woman's shooting death on Fifth Avenue. They said they found the suspected gunman in an alley after he shot himself.

Brian Rigney says he and his father were watching TV Monday morning when they heard two loud pops coming from outside.

“All we heard was two pops - pop, pop - and that was it,” Rigney said. “We thought it was somebody’s car backfiring or something like that.”

Rigney, who lives on 120th Street in the Lansingburgh section of Troy, didn’t learn until more than an hour later that Troy police were investigating a homicide and attempted suicide just around the corner at a Fifth Avenue home.

“I’m not surprised because this area is getting really bad,” Rigney said. “It really is.”

DeWolf says officers responded to the house and found 54-year-old Lisa Sousie inside, dead from a gunshot wound. They believe she was shot by her husband, 57-year-old Mark Sousie.

“They had been estranged for the past six weeks or so, I’m told,” DeWolf said.

DeWolf says shortly after taking his wife’s life, Sousie shot himself in the face with a shotgun in an alley behind the house.

“[Sousie] is expected to survive,” DeWolf said. “We do expect to charge him, but he hasn’t been charged yet.”

DeWolf says Mark Sousie sustained serious injuries and was taken to Albany Med but is expected to recover. He says the couple had been living apart for at least six weeks and had a prior domestic incident involving police. Says couple’s adult son was home during today’s shooting. pic.twitter.com/LvMxuwv1NU

DeWolf says police responded to the home for one prior domestic incident, adding that an adult son who lived on the second floor was home at the time of Monday’s shooting.

“He ran down and found his mother there and checked for a pulse and then called 911,” DeWolf said.

While Rigney believes the incident is a symptom of a declining neighborhood, DeWolf calls it a domestic tragedy that was impossible for officers to prevent.

“You sign up to protect and serve and do all that you can do, and you can’t really have much of an effect on calls like this other than trying to comfort the people that are left,” DeWolf said.

Lansingburgh schools were on a precautionary lockout Monday morning, but it was lifted after a short time.