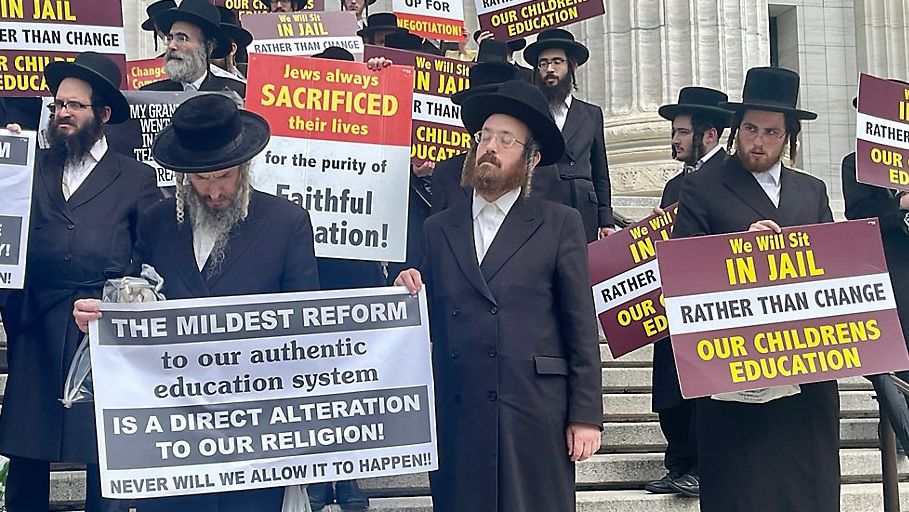 Dozens of Hasidic Jewish men rallied outside the state Education Department building in Albany on Monday as Board of Regents members voted to advance new regulations to provide greater oversight of nonpublic and private schools in New York. (Spectrum News 1)

The New York State Board of Regents voted Monday to advance new regulations that provide greater oversight to enforce state education law about what's being taught in nonpublic school districts.

The debate over the new regulations is dividing parents in the Hasidic community as the state could enforce stricter regulations about what their children are taught in private school.

Shulim Leifer, born and raised a Hasidic Jew, says he received a bare-minimum education growing up attending a yeshiva, or community private school.

"When I graduated, I guess you'd say, school, at age 18, I was equipped with a fourth-grade education — if that," Leifer said Monday.

Leifer, 37, drove to Albany from the city to fight for a higher quality of education for his three school-aged children the day after The New York Times published an investigative report about the academic failure rampant within Hasidic private schools flush with cash.

SED may review nonpublic schools to evaluate their instruction's equivalence to public districts.

Some members of the Hasidic community who feel the new regulations attack their beliefs and will limit their children's ability to learn their religious values are pushing back.

"Fundamentally, we don't think government should have a role in regulating nonpublic schools," said Rabbi Yeruchim Silber, director of New York government relations with Agudath Israel of America. "...We have a wonderful lifestyle — a family life, and this is a result of our school system."

Some Republican lawmakers have come out against the new regulations, saying Democrats are waging war on religious and educational liberties.

"Parents are paying for their choice," Silber said. "Parents should have a choice, and they're exercising their choice."

They maintain they will not bend to stricter enforcement.

Beatrice Weber, a mother of 10 from Brooklyn, filed a complaint with the state Education Department in 2019 about the education her then-7-year-old son was receiving at his Hasidic boys' school.

A tutor recently evaluated the now 9-year-old, and found he's reading and writing at a second-grade level.

"Basically, [they're] just running things the way they want to," Weber said. "An idea that an outside body will come and tell them what to teach is terrifying. But our children are being thrown under the bus."

Weber says parents like her and their children face retaliation, including losing their jobs or having to move, for speaking out.

"They're not requiring teachers to be licensed or certified," she said. "So there's a lot of work still to be done."

State education law dating back to 1895 requires "every child receive an education that allows them to fulfill their potential and teaches them the skills and knowledge needed to contribute to society and participate fully in civic life," SED spokeswoman Emily DeSantis said.

"In recognition of the diversity of nonpublic schools across the state, the proposed regulations set forth multiple pathways for schools to demonstrate substantial equivalency of instruction and provide time for schools to make necessary adjustments where needed," she added. "As always, people have the right to express themselves and their views on public policy. ”

Gov. Kathy Hochul today deferred to the education department about the regulations and enforcement, but stressed her administration is focused on getting children's education back on track after the pandemic.

"There's a regulatory process in place, but the governor's office has nothing to do with it," she said. "...The Department of Education is focused on this, there's a process in place for them to identify what needs to be done and they'll be working with local officials on this."

Proponents of the changes say they don't go far enough. Parents like Leifer and Weber say they will continue to fight to ensure the state properly investigates and enforces private schools offer the quality education their children deserve.​

"We deserve an education," Leifer said. "We are entitled to an education and that is something that is going to make us better Jews."

The state has at least 1,800 nonpublic and private school districts. SED estimates recognizing more than 200 additional schools after the rules take effect.

The education department received about 350,000 public comments on the proposed rules since the spring. Department officials spent about 2,000 hours reviewing and discussing the suggestions, Board of Regents members said.

The 2022-23 state budget contains $301 million to support nonpublic schools — an increase of $51 million, or 20%, from last year, according to the state Budget Division.