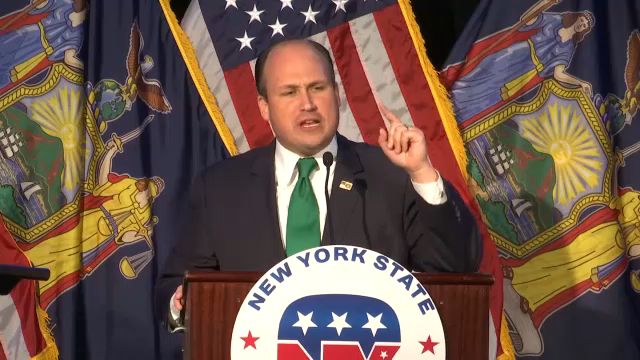 Langworthy filed petitions with the state Board of Elections Thursday and released his campaign announcement video Friday morning. He framed himself as “fighter who knows how to win.”

Among the election issues the candidate highlighted, crises as he put it, are inflation, record gas prices, open borders, the threatening of 2nd Amendment rights and police under attack.

“I will never stop fighting for our values, our rights and our community,” he said. “Western New York and the Southern Tier deserves a conservative Republican Congressman who is tough enough to take the fight to Joe Biden and the radicals in Washington and get real results for our taxpayers.”

There is no requirement for a candidate running for Congress to live in that district, a rule that’s become more obvious in this redistricting year. Langworthy made clear, however, he grew up in the Southern Tier and his family still lives there.

“When the Republican Party in New York needed new leadership, President Trump called on me to turn things around,” Langworthy said.

The candidate's mention of the former president was likely strategic. Both he and likely primary opponent Carl Paladino were early and loyal Trump supporters and both are vying now for his support.

Friday is the deadline to submit petitions and Paladino has said he has more than enough to qualify for the ballot. Paladino and Langworthy have a long history even before their mutual Trump support as Langworthy was a staunch supporter of the Buffalo businessman’s 2010 gubernatorial campaign when he was the Erie County chair.

Paladino does not live within the new district currently either.

The election opened up a week ago when Rep. Chris Jacobs dropped out of the race. Jacobs faced immense pressure from the GOP and Conservative Party to withdraw after expressing his support for several new gun laws including a federal ban on AR-15-style rifles.

The Conservative committee to fill vacancies replaced Jacobs with Langworthy. Republicans punted on the option choosing to have any candidate collect the required amount of signatures in the new district.

Airforce veteran Max Della Pia is the Democratic-endorsed candidate for the general election. There is also a special election for the current 23rd District in August between Della Pia and Steuben County Republican Chair Joe Sempolinski.