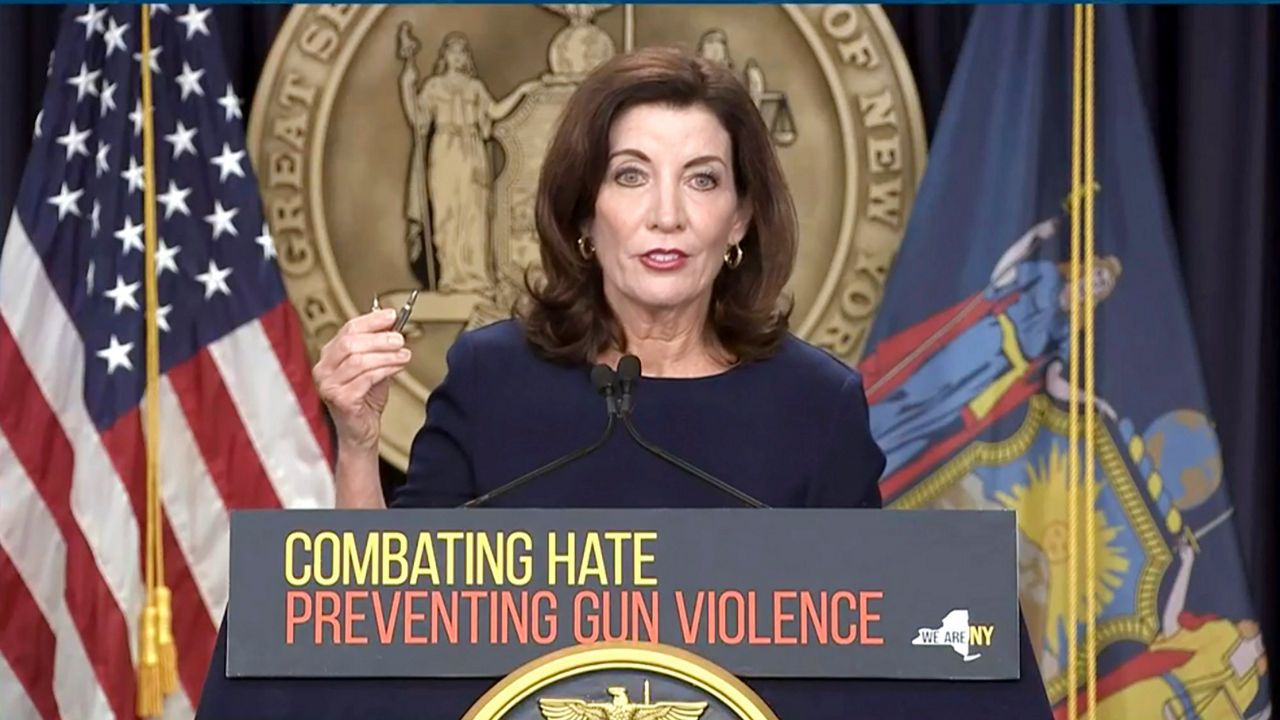 Gov. Kathy Hochul on Wednesday called for legislation that would raise the age of purchasing certain types of firearms from 18 to 21 in New York in the wake of mass shootings in Texas and Buffalo this month that have jolted the nation.

Hochul said “at minimum” she wants the law to limit the purchase of AR-15-style weapons for those under age 21.

"I will not sleep at night until I know that everything has been done as humanly possible to protect New Yorkers and to help them heal," she said.

“Am I supposed to just leave the flags at half staff? They’re still at half staff from Buffalo,” Hochul says with a catch in her voice

Hochul announced plans to increase reporting of guns recovered at crimes and step up State Police check-ins at schools around New York, while touting the recovery of thousands of illegal firearms in recent months.

Her announcement to raise the age of some firearm purchases comes as lawmakers are preparing to leave Albany on June 2, and have three scheduled session days remaining.

“I don’t want an 18 year old to have a gun,” Hochul said after holding a meeting of an interstate task force addressing the flow of illegal firearms into New York. "I want to work with the Legislature to do something that is far more commonsense than we have right now. At minimum the AR-15s, but I'm going to take a look at everything."

Hochul added she would call a special session of the Legislature if the U.S. Supreme Court in the coming weeks overturns New York’s strict limits on conceal carry of firearms. Hochul has previously proposed measures meant to tighten the state’s law addressing the access of firearms for people who are deemed to be too dangerous.

State lawmakers are expected to take up a package of gun control measures by next week before their scheduled end to the legislative session.

President Joe Biden on Wednesday evening called for action as well on guns, but activity on the issue in the narrowly divided Congress is unlikely.

The governor decried the spate of mass shootings that have rocked the country this month, but said the pain should be channeled into action.

“We must harness that outrage and disgust,” Hochul said. “Am I supposed to just leave the flags at half staff? They’re still at half staff from Buffalo."

AR-15 style guns have already come under scrutiny by the SAFE Act, a package of gun control measures. The law limits features on semiautomatic weapons that include being capable of having features like detachable magazines and pistol grips.

"We've seen two mass executions by 18 years old and we need to make New Yorkers safer and people around the country safer and this is a simple way to do it," he said.

But Republicans, including state Sen. George Borrello, said the move would not have an affect on gun violence. Instead, he wants to focus on mental health.

"This is just nibbling around the edges for political reasons in my opinion," he said. "We need to address first and foremost why people are doing this."

Borrello pointed to his bill meant to expand measures already the books for those who are in a mental health crisis.

"It's a small percentage of people with mental illness who are violent," he said. "But that is the part I think we have failed miserably here in New York state."