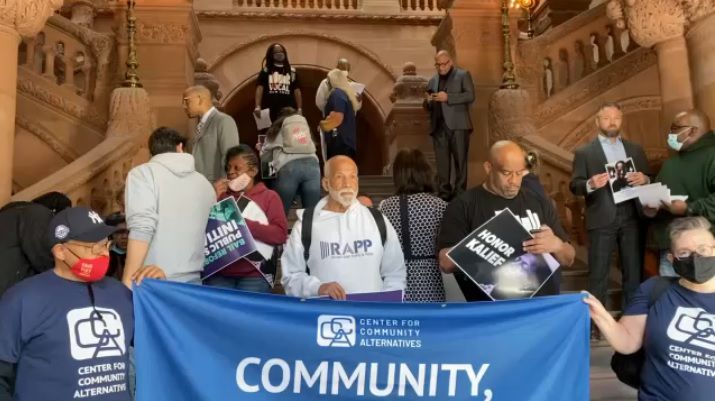 A leak of proposed changes to New York's controversial law that largely ended cash bail requirements for many criminal charges is raining on the budget parade at the state Capitol.

With roughly a week and a half to go before the budget deal, last week's disclosure that Gov. Kathy Hochul is trying to negotiate changes to the law have set up a difficult needle for her to thread: Progressives don't want to do it; suburban and upstate Democrats feel like they must.

"I have 10 days to work that out," Hochul said on Monday. "I didn't sign up for this job because I thought it was easy."

Hochul wants to give judges new, specific criteria to determine who is eligible for bail. Her proposal also calls for strengthening Kendra's Law, which requires people who have mental health issues receive treatment. People facing multiple offenses would not be released.

Hochul's proposals have been met with similar amounts of skepticism from progressive advocates who do not want to make any changes as well as from Republicans over whether she can bring enough Democrats along to achieve any changes.

At the heart of the controversy surrounding cashless bail is a sharp rise in violent crime in New York, and around the country. Polling has shown public safety and crime to be a key concern for voters in New York ahead of an election season in which Republicans are expected to have the wind at their backs, casting Democratic elected officials as soft on the issue.

Hochul's proposals come as Republicans have criticized the law for years, and suburban and upstate Democrats have sought changes.

But top lawmakers in the state Senate and Assembly remain publicly opposed to scaling the bail law back. Senate Majority Leader Andrea Stewart-Cousins has said a "national Republican campaign of fear" has stoked opposition to the bail law over the last several years, unfairly and inaccurately linking the law to the rise in crime.

Up until last week, Hochul's public position had been to follow the lead of state lawmakers. But with the document outlining the proposed changes having been leaked, the proposed changes surrounding the law are now part of the often messy and secretive sausage-making that is the state budget process.

Hochul said Monday her office was not behind the release of the proposal to change the bail law.

Publicly, Hochul has called for efforts to crack down on gun crime and the flow of illegal weapons into the state. She wants to expand the state's Tuition Assistance Program to include people in prison and backs the sealing of criminal records once a person has paid their debt to society in order to help them find a job and housing.

"The public is aware that I share their concerns about public safety and that's why we're working with my team and working with the legislators to craft a position and a policy and work toward getting it in the budget that I believe is working to respond to the needs right now,"  she said.

But the details will be hashed out in closed-door meetings with top lawmakers and the governor, the three officials who typically negotiate the top-line issues in the state's $200 billion spending plan.

"I've committed to my partners in the Legislature that I will not be negotiating the budget in public, so we have 10 more days," she said. "We're working on it."

The existence of the plan, along with the acknowledgement Hochul wants those changes in the budget, led to an uproar among criminal justice reform advocates, who are worried any changes could lead to further incarceration of low-income defendants of color.

"This is the basis of bail reform from the beginning: To create a sense of fairness across the board so that people who cannot afford to pay their way of out of jail don't become the commodity in our jail and jailhouses," said advocate Marvin Mayfield, who attended a rally at the Capitol opposing any changes.

Republicans like state Sen. Jim Tedisco, meanwhile, questioned whether Hochul can bring along enough Democratic lawmakers to get the changes agreed to in the state budget.

"The question is can she get her colleagues in the majorities in the Senate and Assembly to go along with those adjustments, which make eminent, common sense," he said. "It's things we've been talking about my side of the aisle for a number of years now."