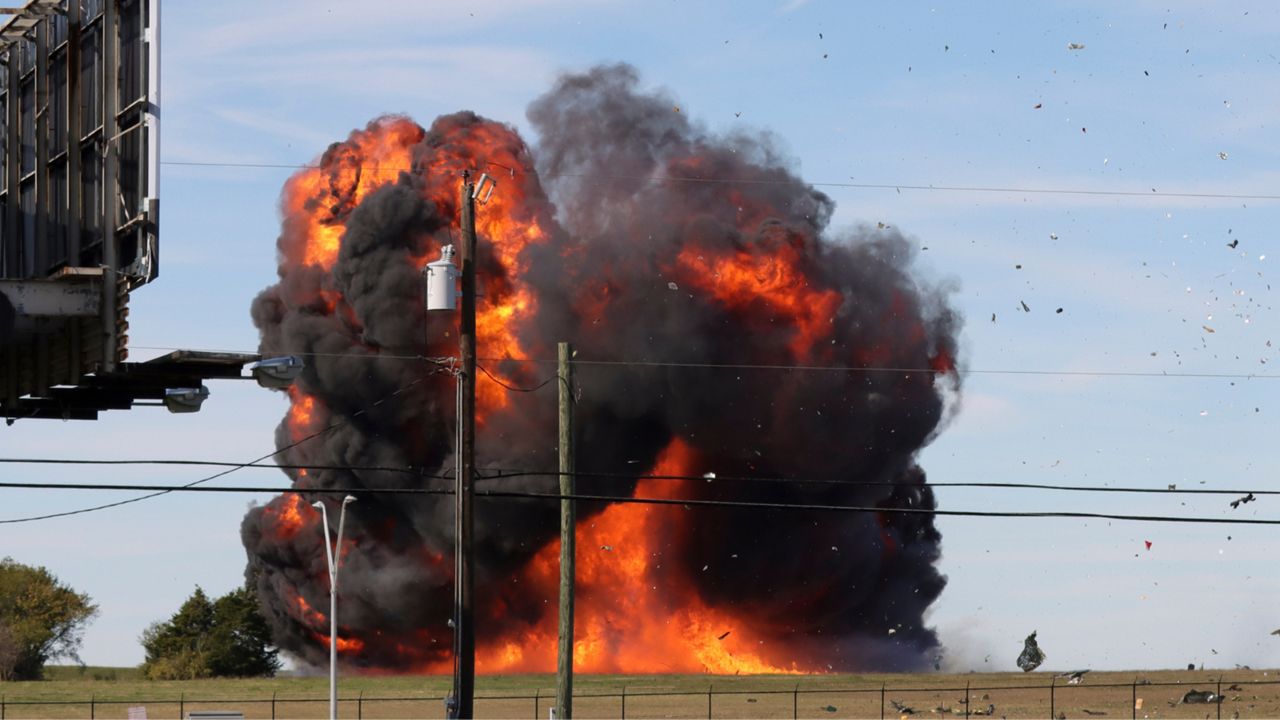 DALLAS (AP) — National transportation officials are in Dallas on Sunday investigating the cause of the midair crash of two historic military planes during an air show that left six people dead.

A World War II-era bomber and a fighter plane collided and crashed to the ground in a ball of flames on Saturday, leaving crumpled wreckage in a grassy area inside the Dallas Executive Airport perimeter, about 10 miles (16 kilometers) from the city’s downtown.

The crash came three years after the crash of a bomber in Connecticut that killed seven, and amid ongoing concern about the safety of air shows involving older warplanes. The company that owned the planes flying in the Wings Over Dallas show has had other crashes in its more than 60-year history.

The crash claimed six lives, Dallas County Judge Clay Jenkins tweeted Sunday, citing the county medical examiner. Authorities are continuing to work to identify the victims, he said. Dallas Fire-Rescue told The Dallas Morning News there were no reports of injuries on the ground.

Armin Mizani, the mayor of Keller, Texas, said Terry Barker, a retired pilot for American Airlines, was in the B-17 bomber that crashed. Mizani is the mayor of the town where Barker lived and said he learned of Baker’s death from his family.

Mizani said Barker’s death has been difficult for his town of 50,000, where many of its residents know each other.

“It’s definitely a big loss in our community," he said. "We’re grieving.”

Barker was an Army veteran who flew helicopters during his military service. He later worked for American Airlines for 36 years before retiring in 2020, Mizani said.

The National Transportation Safety Board took control of the crash scene, with local police and fire providing support, Dallas Mayor Eric Johnson said. The Federal Aviation Administration also was going to investigate, officials said. The planes collided and crashed about 1:20 p.m., the FAA said in a statement.

Officials did not specify how many people were inside each plane, but Hank Coates, president of Commemorative Air Force, the company that owns the planes and put on the air show, said one of the aircraft, a B-17 Flying Fortress bomber, typically has a crew of four to five people. The other, a P-63 Kingcobra fighter plane, has a single pilot. The aircraft are flown by highly trained volunteers, often retired pilots, he said.

John Cudahy is president of the International Council of Air Shows, a trade group that sets the standards air shows follow and oversees the training of pilots and air bosses. Cudahy said that typically at air shows there is a Friday rehearsal where the pilots fly through the entire show to practice, so the Saturday show is actually the second time the pilots have flown the show. There are also detailed briefings each day to go over the plan for the air show and cover exactly where each pilot will be and their roles in the show.

“It’s still to early to figure out what happened yesterday. I’ve watched the tape several times and I can’t figure it out and I’ve been doing this for 25 years,” Cudahy said.

Several videos posted on social media showed the fighter plane flying into the bomber, causing them to quickly crash to the ground and setting off a large ball of fire and smoke.

Air shows must obtain special waivers from the FAA and all of the pilots have to demonstrate their skills in low flying and other maneuvers used in air shows, said John Cox, a former airline captain with more than 50 years’ experience. Cox is also founder of Safety Operating Systems, a company that helps smaller airlines and corporate flight services from around the world with safety planning.

Each air show is overseen by an “air boss" who serves as the flight controller for the event, Cox said.

“If there’s any adjustments that have to be made, it’s the air boss that makes those calls and the pilots comply with that,” he said. In addition, any pilot with a mechanical problem would announce it to the air boss, he said.

Air shows typically rely on extremely detailed plans, including contingencies for emergencies, Cox said. For example, any pilot who ran into trouble could break out of formation and go to a designated area free of other planes that is identified by a landmark of some kind.

The B-17, a cornerstone of U.S. air power during World War II, is an immense four-engine bomber used in daylight raids against Germany. The Kingcobra, a U.S. fighter plane, was used mostly by Soviet forces during the war. Most B-17s were scrapped at the end of World War II and only a handful remain today, largely featured at museums and air shows, according to Boeing.

The Commemorative Air Force has had previous crashes during its more than 60-year history, including a deadly 1995 crash near Odessa, Texas, involving a B-26 bomber that killed five crew members, according to an NTSB report. The plane crashed while practicing for an air show. The NTSB determined that the probable cause was the failure of the pilot to maintain minimum airspeed for flight.

In 2001, two separate West Texas crashes involving planes owned by the group — one in April and one in May — killed three people. In June 2005, two people were killed when a single-engine plane owned by the group crashed in Williamson, Georgia.

The Commemorative Air Force, previously called the Confederate Air Force until members changed its name in 2001 to avoid any association with the Civil War, had been headquartered in Midland, Texas, but relocated to Dallas in 2014.

Wings Over Dallas bills itself as “America’s Premier World War II Airshow,” according to a website advertising the event. The show was scheduled for Nov. 11-13, Veterans Day weekend, and guests were to see more than 40 World War II-era aircraft. Its Saturday afternoon schedule of flying demonstrations included the “bomber parade” and “fighter escorts” that featured the B-17 and P-63.

The story has been corrected to reflect that the P-63 Kingcobra is not a jet.