President Joe Biden speaks as he looks at IBM chips, mainframes and memory cards during a tour of an IBM facility with IBM Chairman and CEO Arvind Krishna, left, in Poughkeepsie, N.Y., on Thursday Oct. 6, 2022. (AP Photo/Andrew Harnik)

President Joe Biden on Thursday traveled to Poughkeepsie, New York, to celebrate IBM’s $20 billion investment, which will cover research, development and manufacturing of semiconductors, quantum computing and artificial intelligence across the Hudson Valley region over the next decade.

"Made in America is no longer a slogan," Biden said in a speech at Poughkeepsie's IBM facility, cheering a boom in domestic private-sector investments under his administration. "It's a reality."

"It's here at this factory, and the factories of other companies across America, where America's future is literally being built, because of the groundbreaking CHIPS and Science Act that I signed into law," the president said.

“It was here in Poughkeepsie where the rifles for World War I were made," Biden said. "The first electric typewriters, calculators, even cough drops. were made. And it is here now where the Hudson Valley could become an epicenter of the future of quantum computing.”

IBM’s Poughkeepsie facility is the company's only site that builds mainframe systems, and is home to its first Quantum Computation Center. The company aims to make the a global hub for the company’s quantum computing development, IBM said in a release.

The president said that quantum computing "has the potential to transform everything from how we create new medicines to how we power artificial intelligence" and highlighted the importance of semiconductor manufacturing in the United States, not only for job creation, but for making the U.S. economy independent of other nations.

"As we saw during the pandemic, when factories when factories that make these chips shut down around the world, the global economy literally comes to a screeching halt," Biden said. "More Americans learned the phrase 'supply chain' and what it means. Well guess what? The supply chain is going to start here and end here in the United States."

Biden blamed the shortage of chips as a major driver of inflation, citing higher prices of cars, which require semiconductors.

"Folks, we need to make these chips here in America, to bring down everyday costs and create good-paying American jobs," the president said. "Don't take my word for it. Listen to the leaders of IBM and across the country. They're making decisions right now about where to invest and produce these chips. And they're choosing America because they see we're coming back, we're leading the way."

"This is about economic security, folks," Biden said. "It's about national security. It's about good-paying jobs you can raise a family on. Jobs now, jobs for the Future. Jobs in every part of our country, and that's what we're going to see here in this factory in the beautiful Hudson Valley. People of all ages, all races, all backgrounds, with advanced degrees to no degrees, working side-by-side, doing the most sophisticated manufacturing the world has ever seen."

Biden toured the facility with Gov. Kathy Hochul and Democratic Reps. Sean Patrick Maloney, Paul Tonko, and Pat Ryan, House incumbents in competitive races in the region. Dutchess County Executive Marc Molinaro, a Republican who lost to Rep. Ryan in a special election for New York's 19th Congressional District in August, was in attendance for the event as well. Molinaro is running again in November against Democrat Josh Riley in a newly redrawn 19th District.

"I’m more optimistic about America’s chances today than I have been in my entire career," Biden said as he toured the facility.

“I’m more optimistic about America’s chances today than I have been in my entire career” @POTUS as he tours IBM @SPECNews1HV pic.twitter.com/xncTZ6gdmo

Speaking ahead of the president, IBM chairman and CEO Arvind Krishna said that IBM's Poughkeepsie facility is "of deep symbolic value" for the company and the country "for good reason," noting that "for decades, the innovations we have done here ... have helped keep the United States at the forefront of technological leadership, created countless jobs and strengthened our economy." 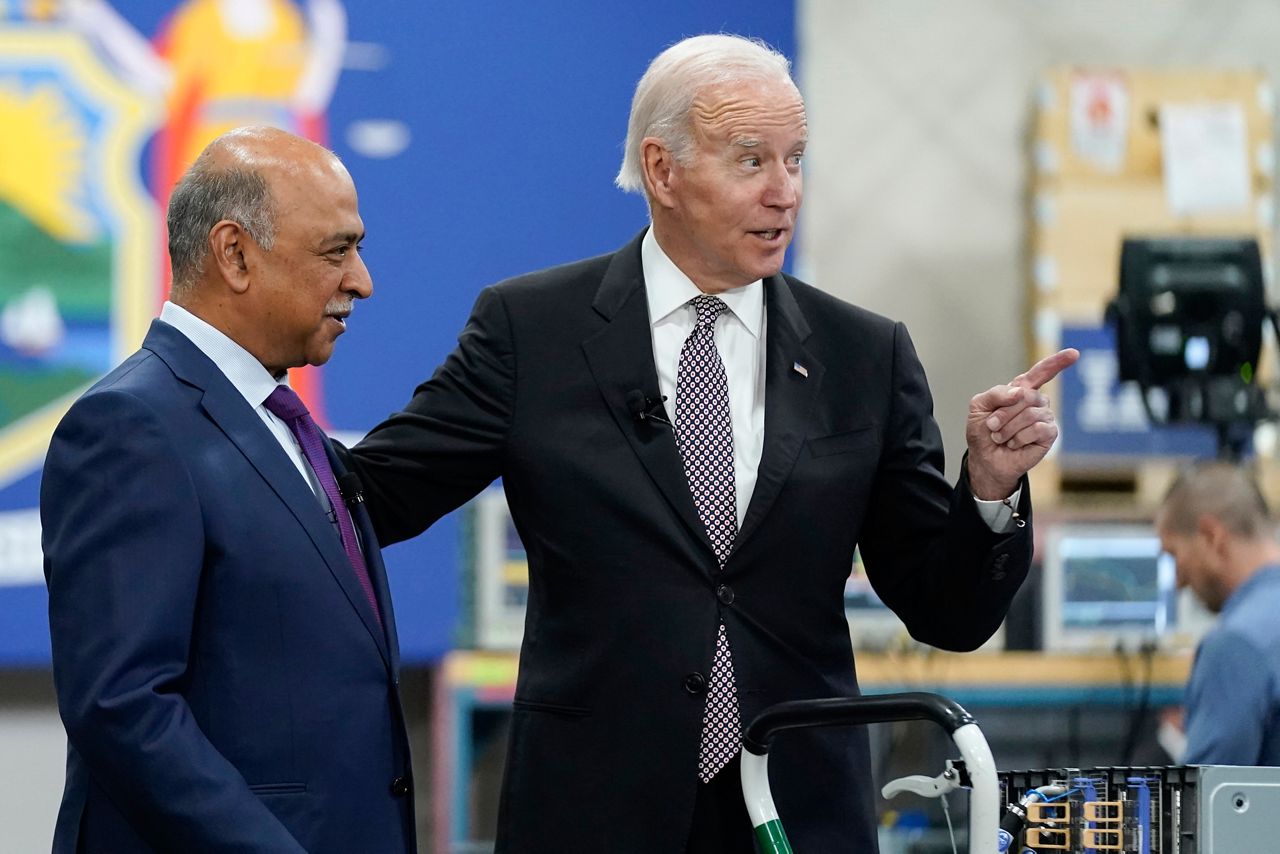 Krishna praised the CHIPS and Science Act, thanking Biden and Schumer and the members of Congress "who worked tirelessly to make this unique investment in America's semiconductor industry."

"This law will play a critical role in ensuring the reliable and secure supply of chips," he said. "It will also help advance the business of quantum computing. With the CHIPS and Science Act, the federal government has made an important investment in America's future."

The IBM announcement is the latest in a series of private sector investments since the president signed the CHIPS and Science Act into law, a bill aimed at bolstering competitiveness with China that contains more than $52 billion in chip manufacturing and research. The bill, a major priority of the Biden administration and Senate Majority Leader Chuck Schumer, D-N.Y., won significant bipartisan support in Congress.

Thursday’s event follows Tuesday’s announcement that Micron will invest up to $100 billion over the next 20 years to build a chip manufacturing facility in Clay, a suburb of Syracuse, New York. Biden said Thursday that that Micron's investment "create 50,000 jobs and create create an increase in America share the memory chips increase it by 500%."

Biden, in a statement at the time, called the Micron announcement “another win for America,” crediting his economic plan, which includes the CHIPS and Science Act. Micron CEO Sanjay Mehotra, speaking at an event earlier this week, agreed.

“There is no doubt that without the CHIPS Act, we would not be here today,” Mehotra said Tuesday, adding: “The combined efforts at the federal, state, and local level paved the way for Micron to realize the largest private investment ever made in New York state history.”

Micron also recently announced a major factory project in Idaho, another in a string of recent domestic investments from technology companies. Chip giant Intel recently broke ground last month on two facilities near Columbus, Ohio, a $20 billion investment and Samsung announced a $17 billion plant in Texas late last year, in addition to invetments from other companies.