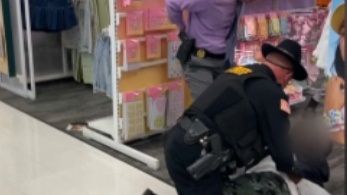 Mom: Teen with autism traumatized after tackled by Saratoga County deputy in Target

A video captured by a bystander of a Saratoga County Sheriff's deputy tackling a teenage boy his family says has autism in a Target in Clifton Park is drawing outrage from the boy's mother and the woman who shot the video.

Chante Ware is still processing the events that unfolded earlier this week.

“Mentally and emotionally, I’m not OK, but for my children, I have to be strong because I am their voice,” said Chante Ware, the mother of the 14-year-old boy seen in the video.

She was down the block from the Target in Clifton Park when she received a phone call from one of her children, saying her son was in handcuffs.

“At the moment, I knew that whatever had happened, it was bad because of the way she was crying," Ware said. "My anxiety went from two to one million.”

Chante's 17-year-old daughter can be seen in the video wearing a light pink jacket, shouting to officers that her brother has autism.

As events quickly escalated, the officer took the boy to the ground while a group of his siblings and family members crowded around.

“I’ve seen the video, the first part. I can’t bring myself past seeing my son's face to continue to watch the rest,” Ware said.

Saratoga County deputies said they arrested the 17-year-old girl and charged her with assault. They said she hit a deputy in the face with a soap dish.

The 14-year-old teen with autism was not arrested.

The sheriff's department has not provided details on what initially led them to grab and handcuff the boy.

The sheriff's department said it is an ongoing investigation and they no further comment. A Target spokesperson said a security employee called deputies "after a guest entered the store who had previously threatened physical violence against one of our team members."

The incident was caught on video by Tracy Sangare.

“I didn’t know what to do because I wanted to call for help," Sangare said. "But who do you call for help when it's the police harming the people.”

Sangare was in the parking lot loading her car when she noticed the sheriff's cars, so she went back into the store.

“As soon as I saw the police officer with his hands on the child, I pulled out my phone and started videoing, and I turned to the manager and he said, 'We just wanted them to leave,'” Sangare said.

She said she overheard the teen boy saying to the officers, “I have money to pay. Why are you grabbing me?”

“He looked terrified, and she looked like she was just protecting her brother,” Sangare said.

While Ware hopes the officers involved are reprimanded, she fears the trauma the incident caused cannot be undone.

“He has issues dealing with authority now. Those that he once trusted, he will no longer trust,” Ware said. “There’s different levels of the spectrum, and people should really be familiar with autism itself. People walk around with autism everyday, and you will not know."