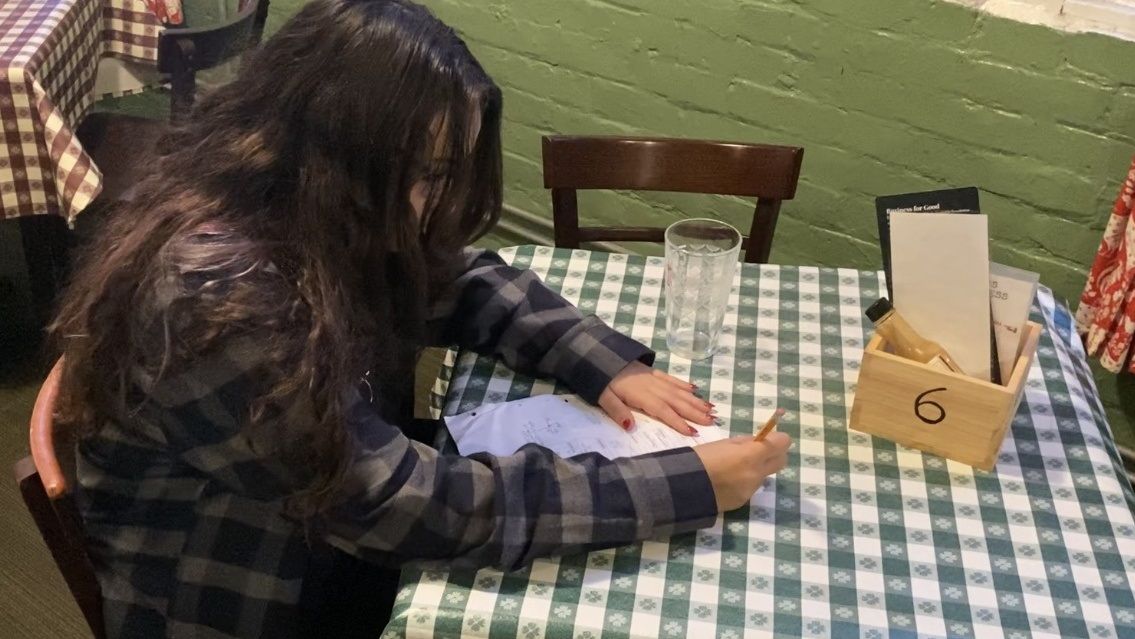 With school out on a recent day, it was homework time for Jalen Pearsall.

“This is geometry,” Pearsall said as she flipped through a three-page packet. “It’s a lot of angles and line segments and we have to memorize the properties that go along with it.”

The 15-year-old is about midway through her sophomore year at Saratoga Springs High School.

“I’m a pretty good student at school. I get good grades,” Pearsall said.

Seated at a small table in the corner, Jalen settled into her studies at a location most wouldn’t associate with schoolwork.

“I’m in Hattie’s Restaurant at 45 Phila Street, near the center of Downtown Saratoga,” she said.

At the end of summer, Pearsall began working at the popular restaurant as a busser. She and the other school-aged employees are invited to get their work done ahead of their shifts as part of a program known as “Hattie’s Homework Hour.”

“They’re very supportive and they understand it’s very hard to handle school and work, and that’s why they started the program,” she said.

Hattie’s Homework Hour was started this fall by co-owner Beth Alexander. She said she wants to help her teenage employees balance their busy schedules by opening the restaurant early and paying them to be here while they focus on their studies.

“I know from being a mom and running around and picking up and driving here and driving there and trying to coordinate how difficult it is to get kids from point A to point B, that here’s a lot of lost time in driving,” said Alexander, who has two kids who have worked for the family business.

Out of her eight teenage employees, Alexander says seven have taken advantage of the opportunity so far, and she’s looking for new ways to help them.

“I have had a couple of retired teachers reach out who have said they’d like to come and tutor,” Alexander told Pearsall as she checked in with her progress. “I’m going to pool the kids, the other students and see what subjects they want.”

While it’s not the primary motivation, Alexander believes it will help retain staff.

“I don’t think we are going to have very many problems with staffing, but you know, there is a staffing shortage,” she said. “There are many reasons for that, and I am not saying this is the solution, but it is a small step toward helping it.”

Twenty years after she and her husband Jasper bought the restaurant, Alexander says this is one way to give back to the young people who help make their business thrive.

Once her geometry was wrapped up, Pearsall picked up a broom to help her coworkers get ready for the night’s opening.

“I’m looking to get a car, and it would be nice to get some money for that and just to get some extra spending cash and more experience,” she said.

She says she feels lucky to have a job that helps her balance her busy life.

“I love it a lot.” Pearsall said. “I really like working and on top of that, I love the people here, they are really welcoming here. The first week here everyone was really nice, and they still are and it’s great.”