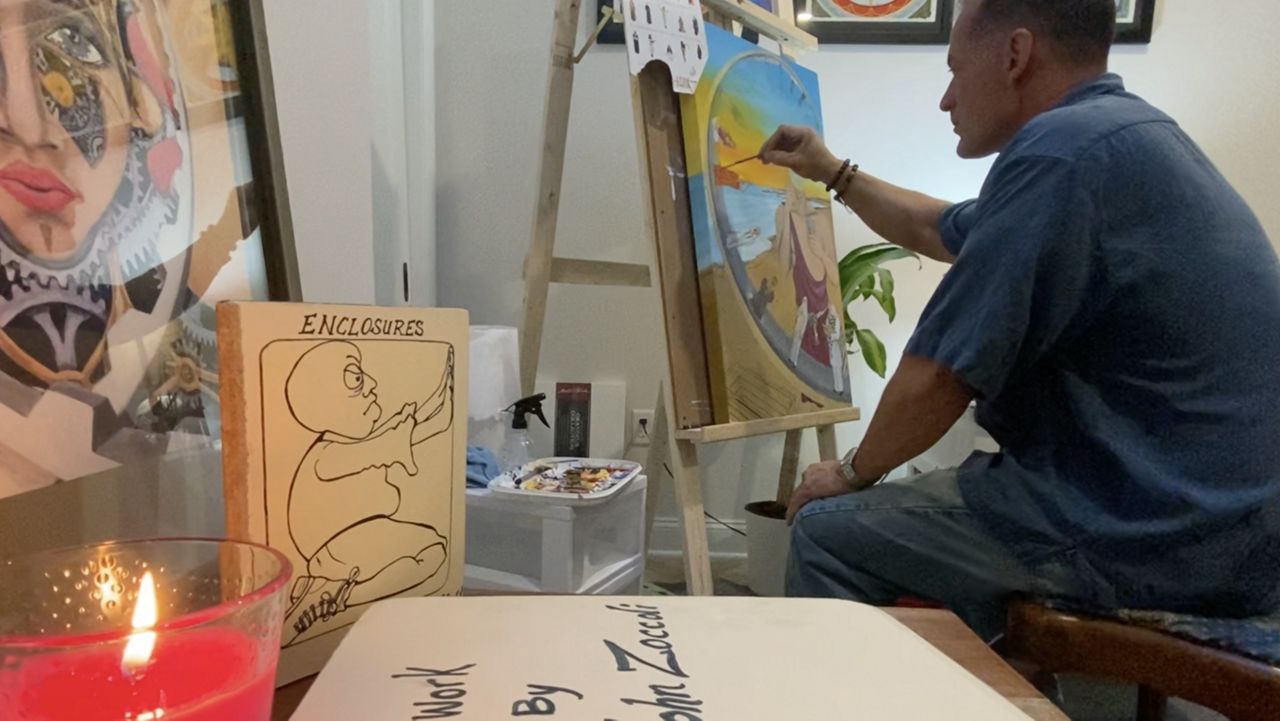 Out of the Dark: Former inmate takes artistic journey toward rehabilitation

John Zoccoli typically spends at least 80 to 100 hours in front of his easel before completing a painting.

Some of his works take even longer.

“This one has been sporadic for years, and sometimes it’s like that,” he said. “Sometimes I get obsessive, and I can’t put it down.”

Mixing the right blend of colors and making them pop with a subtle stroke of his brush are skills Zoccoli mastered in the years following what he calls the darkest moment in his life.


“I took a trip to New York and I was only here one day, and everything went horribly wrong,” Zoccoli recalled.

Zoccoli was 19 at the time and had made the long drive from his home in Florida with four others when the group carjacked and later killed a Long Island man.

“It is something that is on my mind all of the time because it is a burden, it’s a cross I bear, as it should be,” he said.

After being convicted, Zoccoli was sentenced to 25 years to life in prison.

“I was a pretender, I think,” he said. “I was really trying to be the toughest, hardest guy I could be and it wasn’t who I was.”

He says deep down, who he was and continues to be is an artist.

After picking up painting while behind bars, Zoccoli managed to sell his second piece for $500.

“To be seen as an artist and not a prisoner, not the worst decision of my life, not the worst thing I ever did, it gave me satisfaction,” he said. “Really, it helped me find myself because really, I’ve always been an artist.”

While in prison, Zoccoli got involved with Rehabilitation Through the Arts (RTA), a program that aims to break the cycle of incarceration by teaching inmates valuable life skills.

“For my Masters thesis, I developed an art therapy program to help incarcerated individuals deal with the trauma that kind of led them to incarceration and the stuff they experienced while incarcerated, because it’s a difficult place to live,” he said.

A quarter century after he entered, Zoccoli was released from prison last spring.

“Coming into a place, especially during a pandemic, it was exciting and terrifying all at once,” he said.

His new apartment is filled with dozens of completed works, many of which will be featured at a special exhibit at Collar City Mushrooms in Troy next month called “Out of the Darkness.”

“It’s incredibly exciting. This is like a dream for me to have this,” Zoccoli said as he organized some of the paintings he plans to display at the show.

The one-night show will also highlight a poet and musician whose lives were changed by the RTA program.

“What we want to do is show that what goes in there does not have to be what comes out of there,” Zoccoli said.

Not unlike many of the paintings that take him hours, or far longer, to complete, John says he knows he’s a work in progress.

“I have more making up to do than I could ever accomplish in this lifetime, but I have to keep striving,” he said.