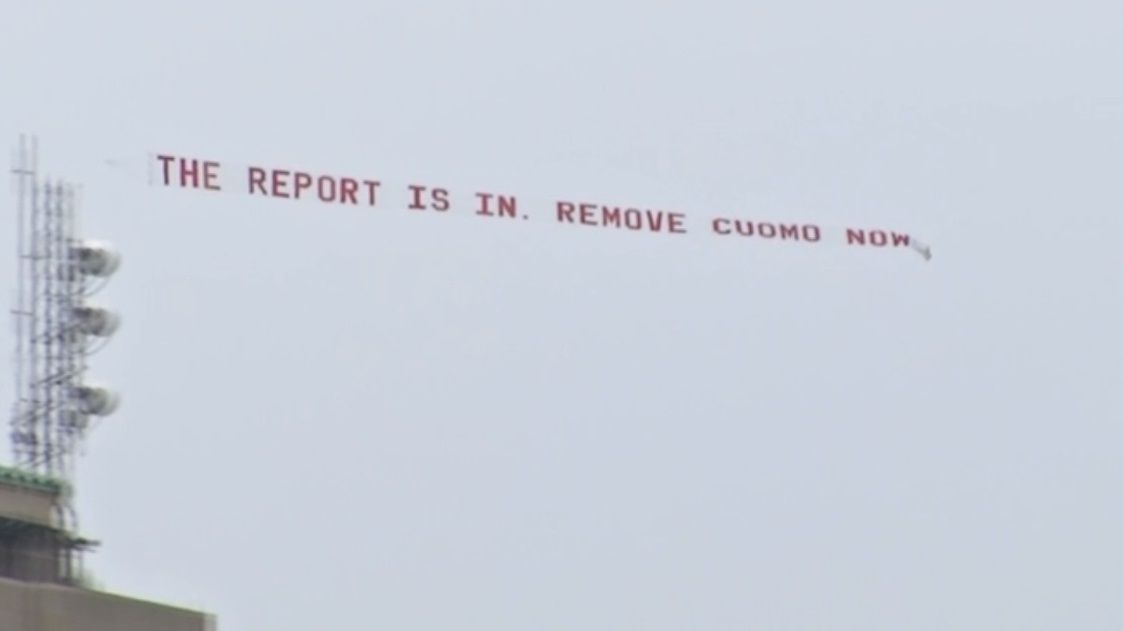 Numerous organizations are calling for Gov. Andrew Cuomo to resign after a report from the attorney general says he sexually harassed several women.

The national organization UltraViolet expressed its feelings, not in a traditional press release, but with an overhead message flown by a plane that was directed at state lawmakers.

"The ball is in their court at this stage, and they needed to see a clear message about what needs to happen next," says Shaunna Thomas, co-founder and executive director of UltraViolet.

The plane carried a banner that read, "The report is in, remove Cuomo now." It flew over the city of Albany for several hours.

While the governor continues to say he did not sexually harass anyone, UltraViolet is among the advocacy groups calling for his removal from office.

"Now, I think it is obvious to everyone, expect maybe Andrew Cuomo himself, that he is unfit to represent this state and should no longer be the governor of New York, or hold any other public office," says Thomas.

UltraViolet says it works to improve the lives of women and girls. While that’s a message the Cuomo administration has often said it’s on board with, UltraViolet disagrees, pointing to behavior outlined in the AG's investigation.

Other groups, such as the New York State Coalition Against Sexual Assault, also say the governor’s actions don’t align with the values he says he supports, and that he needs to be held accountable.

UltraViolet is taking it a step further, questioning policies the administration has aligned with.

"To the extent that he has ultimately supported legislation or policy that can make the workplace more fair and safe for women, it is because he has been pushed by huge coalitions of people who have had to fight for years to get those kinds of policies on the table or on his desk," says Thomas.

Thomas says she hopes the plane pushes lawmakers to act. She also wanted to send a visible message to survivors and victims.