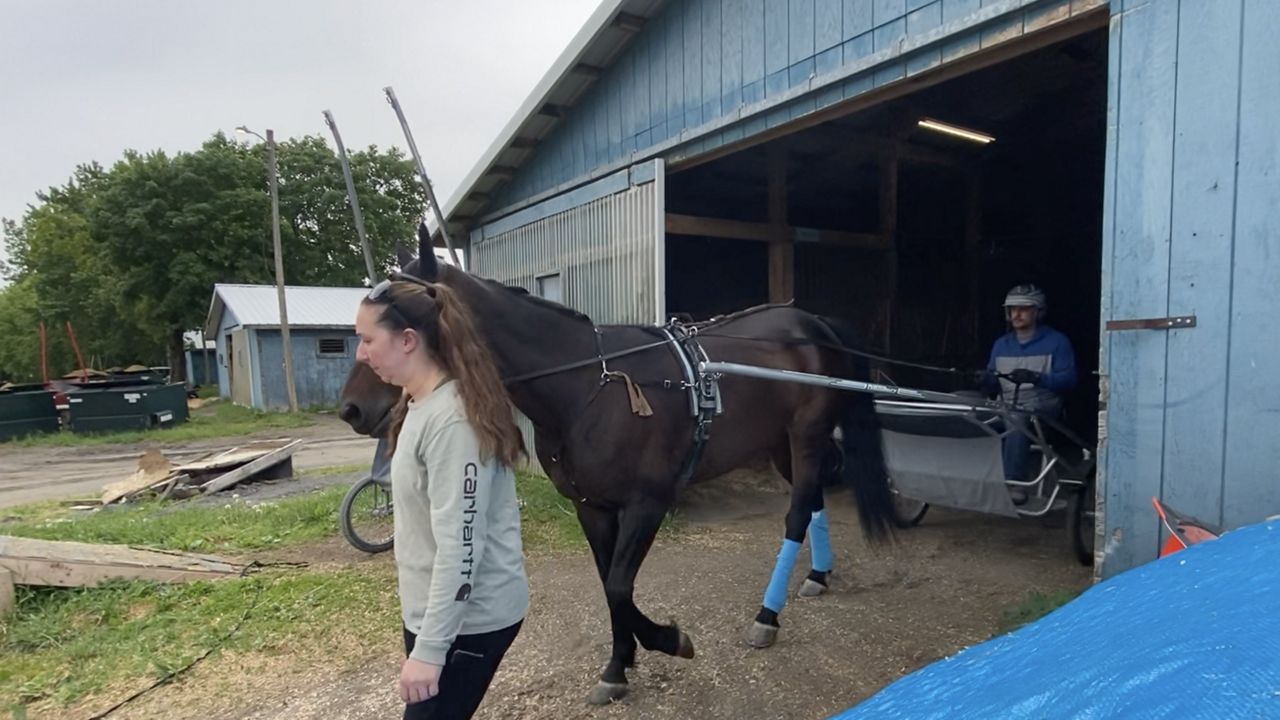 Rain or shine, you’ll find Alek Chartrand in his usual place most mornings. As he tightly grips the reins at speeds as fast as 35 miles per hour, he finesses his horses and cart around the familiar oval of Saratoga’s harness track.

“She’ll throw her tail up over her back and take us for a ride sometimes,” he says as his filly, Trixie Dust, completes a lap. “You can really tell they’re feeling well.”

Growing up in a racing family from Canada, Chartrand has worked with standardbreds his entire life.

“I think it’s the competition,” Chartrand said. “I was always very competitive in sports, and I think it transitioned to this.”

For the past decade, Chartrand’s home base has been in upstate New York. With about 15 horses in the barn to train and look after, he relies on plenty of help from his wife Erica, who was also raised in the sport.

“I think it’s born in you to be a horse lover,” she said.

The Chartrands and others in harness racing compete year-round, and they're about to get a lot busier. June marks the beginning of the New York Sire Stakes, an ultra-competitive string of races that will take them across the state over the next four months.

Their 3-year-old filly, Sweet Olivia, has been training for a race on the first day of the series.

“We gave her some time to mature and get ready for this year,” Alek said. “She started out the season really well and she won two races.”

Shortened from eight races to five because of the pandemic, the Sire Stakes is spread across five New York harness tracks and is exclusively for 2 and 3-year-olds bred in the state.

“These are the top horses in our state, so that is why it is so exciting to see how they do,” said Kelly Young, executive director of the Agriculture and New York State Horse Breeding Development Fund. “This is the top of the line that we produce in New York State.”

Young says increased purses provide a lifeline to owners and breeders who lost out during the pandemic’s early days.

“Racing shut down for a number of months last year and we really had a challenging season, a challenging year, but nothing changes for breeders. They still have to continue,” Young said.

After the day’s first half-dozen races, it is just about time for Sweet Olivia’s Sire Stakes debut. Aside from getting her tacked up, there’s little else the Chartrands can do to prepare the filly for the race on their home track.

“I think she’s ready,” Erica said. “She’s being quiet and she seems calm, which is always a plus.”

“It’s definitely exciting,” Alek said. “It’s nice that the first one is at home. It takes a little less pressure off the horse with shipping and going on the road, so I’m excited it’s at home.”

A few minutes later, Erica walked Sweet Olivia and her husband out of the paddock and onto the racetrack. Moments later, the race was off. Over the next two miles, Sweet Olivia and Alek stayed within striking distance of the leader, but they fell just short of victory.

“Third, we’ll take it,” Erica said as she walked away from a TV monitor and toward the top of the stretch to greet her husband after the race.

Despite the small disappointment, the team is already looking forward to the next race.

“I thought the filly raced really well,” Alek siad. “We battled for early positioning, unfortunately, we did not get to the front, but she finished up pretty strong and I’m pretty happy with her.”