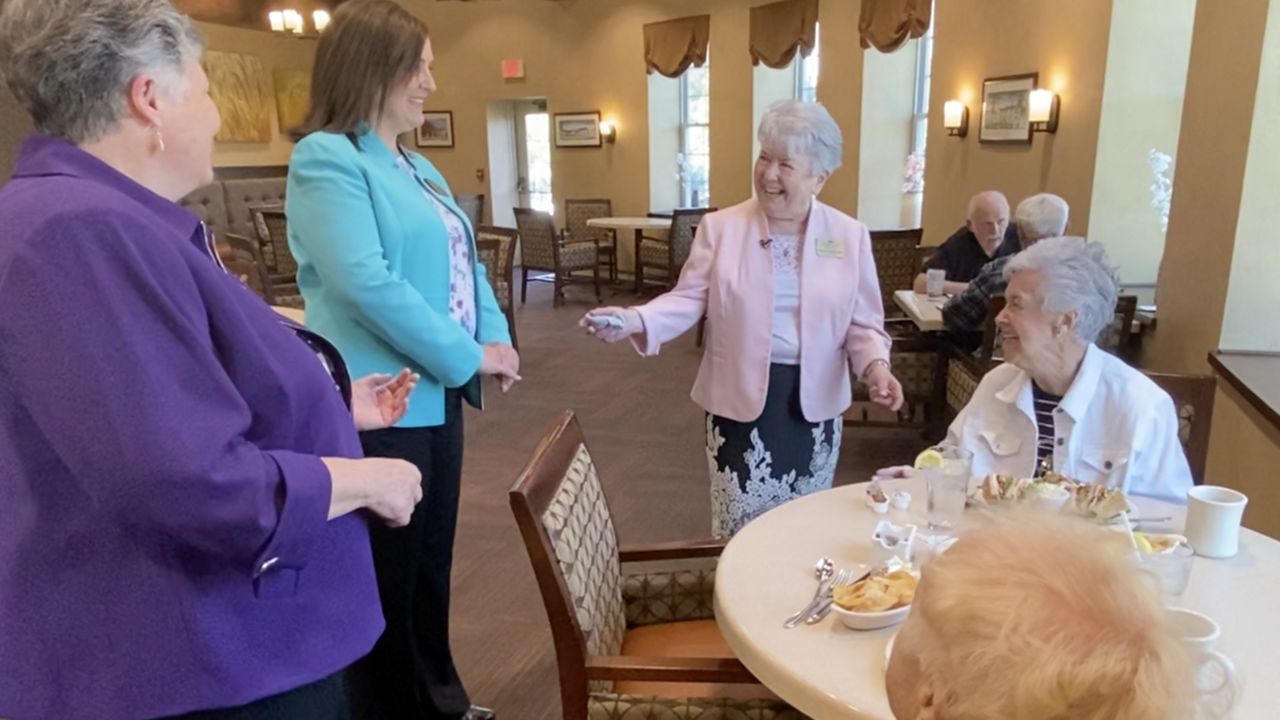 An outsider may think they’ve stumbled into a band practice, but the flush faces and constant movement quickly paint the full picture.

“It’s good, I feel good,” Jack Mayer said during a quick break from hammering drum sticks into the exercise ball in front of him.

“I’ll be sweating by the time I finish here.”

Mayer is a regular in the fitness class held at the Shaker Pointe community in Watervliet.

“I like it a lot,” said Mayer, who moved with his wife to Shaker Pointe from their home in Albany about nine years ago. “I started it about two months ago, and you certainly get a good cardio workout.”

In a room on the other side of the 30-acre campus, a group of friends were busy hitting the virtual links. The foursome cheered each other on as they enjoyed a game of golf played on the facility’s Nintendo Wii console.

An active lifestyle and sense of community are just two of the pillars Shaker Pointe was built on. Co-executive directors Sisters Lauren VanDermark and Kay Ryan helped lay that foundation. “Who’s under par? Nobody’s under par? Did anybody get a birdie?” Sister VanDermark asked, joking with the golfers.

More than a year into the pandemic, Sisters Ryan and VanDermark say everyone here is in far brighter spirits and spending more time together now that coronavirus cases have dwindled and most of the 250 residents have been vaccinated.

“Yes, it was a difficult time, but everybody here kind of pulled together and now we are all looking forward to the idea that there is light at the end of the tunnel,” Sister VanDermark said.

The two nuns have run Shaker Pointe together since the Sisters of St. Joseph decided to build the 55-and-older community in Watervliet a little more than a decade ago.

“They’ve been the best,” one resident remarked as the sisters passed through one of the dining areas. “Everybody loves living here and it comes from the top.”

“Lauren and I have actually worked together for 20 years very closely,” Sister Ryan said.

Each says their different management styles pair well together.

“It’s very funny, her personality is to think globally and mine is the tiny details,” Sister Ryan said. “We complement each other, which has been phenomenal.”

Ten years removed from opening Shaker Pointe, Ryan and VanDermark will soon be given a new mission by the Sisters of Saint Joseph, and are now preparing to hand over the reins to incoming executive director, Kathy Welden.

“The moment you come here, you have a feeling of love and comfort automatically,” said Welden, who began working at Shaker Pointe at the end of April and will take over in July. “That’s strictly from the foundation that they’ve provided here.”

As they soak up every remaining moment, Sisters VanDermark and Ryan say it will be hard to walk away from the community they’ve helped build, but they don’t plan to become strangers, either.

“I think the next part of Shaker Pointe needs to develop, and we’ve done what we can do here, that’s the bitter sweet part,” Sister Ryan said.

“I certainly will miss every single part of Shaker Pointe — the residents, the staff, the visitors, the families,” Sister VanDermark said. “I am coming back to visit for sure. There is no way they are going to keep me out of here!”