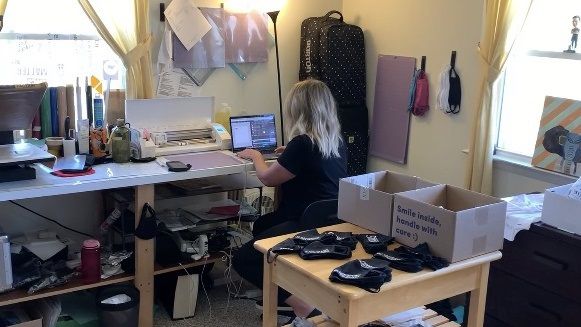 She’s a comedian and musician, but the gigs came to a screeching halt more than a year ago due to the pandemic.

“I canceled my tour on March 12, but if I had waited a day, it wouldn’t have been up to me,” she recalled.

That’s when Harkes retreated to a spare room inside her home in Chatham, where she has become a reluctant retailer, selling personalized masks and clothing for local businesses and organizations.

“Not realizing how serious it was, I made a shirt that said, 'wash your hands' with an expletive thrown in there,” she said. “People thought it was funny so they started asking me if they could get one, and before you knew it, I had a whole online store.”

Harkes is building off the skills she gained while creating her own swag when she first hit the stage several years ago.

“It took me a really long time to learn how to use it because I’m like a kid, if I don’t figure it out right away, I put the toy in the corner and walk away from it,” she said. “Once I figured it out, it was great.”

She says while the intention was never to make a profit, the support has been mind-blowing, and it’s allowed her to satisfy the craving of creativity.

“I hate realizing that I need that much validation,” she said. “But that’s part of what I do for a living, you know, I give and I get applause.”

Thankfully, the applause is coming back, slowly, as some of Harkes' favorite venues start hosting shows again.

“If it weren’t a comedy show, I probably would have openly wept, but I knew that wouldn’t have been that funny,” she said of her first show back at Gaffney’s earlier this month. “The audience, I think, wanted it as much as we wanted it.”

She’s even going to release her first comedy album, which was recorded prior to the pandemic.

“I talk a lot about my own experiences. There is definitely some self-deprecating humor, which I think a lot of people can relate to,” she said. “You know, I’m a narcissist, so it’s just all about me. If you want to get to know me, it’s a good way to do that.”

And while she’s appreciative of the all the support she’s received over the past several months, she’s looking forward to leaving the mask business behind and being back on stage a couple of dozen nights a month.

“I feel good about it. I think if we do it the right way and are still careful, it’ll be a smooth rollout of getting back to normal,” she said. “And it’s OK if it takes some time, too, because it’ll be an adjustment. I can’t go right back into that schedule.”