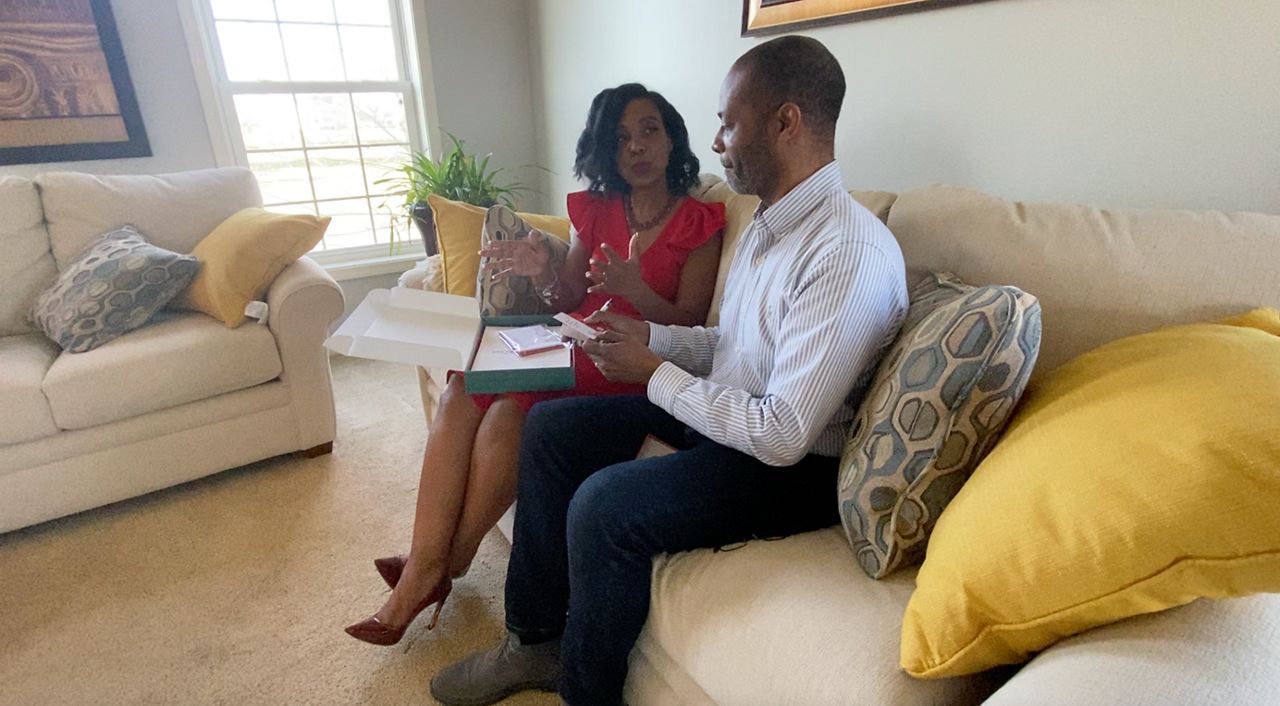 Without even leaving their living room, Kathleen and Mark McLean recently went on a bit of an adventure.

“Conversation starters, oh, I can’t wait. I love it. I love to talk,” an excited Kathleen said, as she reached into the box the couple held on their laps.

The husband and wife from upstate New York were among the first to test out a new product called the DIY Marriage Retreat In A Box, which is designed to help couples work on their marriages from the comfort of home.

“DIY Marriage Retreat In A Box: We are glad you are here and have decided to reach your journey as a couple,” Mark said, as he read the box’s “Getting Started” section.

Along with conversation cards, the box includes a workbook for each partner to guide them through various crucial discussions about their relationship. Some, like planning future adventures together, are fun.

“Honey, let’s talk about our adventures because we have some adventures coming up! Woot, woot!” Kathleen said.

“Can I go first?” Mark replied. “I want to plan our first adventure together. I want to go skiing.”

Other topics, like finances, aren’t always as easy to broach.

The McLeans, who started dating as teens, say difficult conversations like these have been one of the keys to their successful marriage of almost 30 years.

“If you don’t do the difficult questions, you will end up in trouble, you will,” Mark said.

“I think if you don’t talk about the tough stuff, it’s underneath and it will resurrect itself anyway,” Kathleen said.

The DIY Marriage Retreat In A Box was designed by Dr. Corey Jamison and Julie Bush, who also run an executive coaching and consulting business together.

“This is such an important part of keeping love alive, being able to work through conflicts well, being able to manage money, being able to talk about your romantic and emotional lives,” Jamison said. “We wanted to create a platform for couples to be able to do that.”

Jamison and Bush say couples are encouraged to take their time and do the retreat at their own pace.

“They may have a full weekend to dedicate to doing the retreat, and in some cases, it’s a few hours over the course of a week,” Bush said. “We really encourage couples to slow down and do this work at their own pace and on their own timeline so that they have the real timeline they need to have without rushing it,” Jamison said.

Jamison, whose PhD is in psychology, says the idea was largely inspired by getaway weekends she’s spent with her husband, John, over the years. With family and work lives to balance, she says they would save time by scripting out topics they felt were important to discuss.

“With all those little kids in the house, we had seven of them, we didn’t have time to let an argument go on,” Jamison said.

Both Kathleen and Mark say they’d recommend the DIY Marriage Retreat to any couple, regardless of how long they’ve been together.

“I wasn’t quite sure at first because I thought it would be kind of cushy and not really my kind of thing, but I actually quite enjoy it so far,” said Mark, who added that he and his wife once did a marital retreat organized by their church.

As they reflected on almost three decades of marriage, each says they’re even more in love today than they were when they first met.

The DIY Marriage Retreat In A Box is currently for sale on the company’s website.