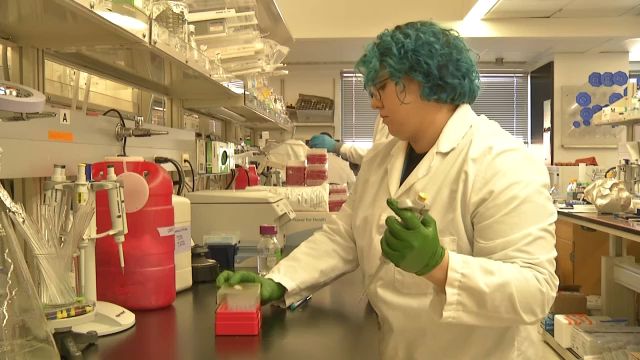 A Ph.D. candidate at RPI’s Chemical and Biology program, Bailey Eden is helping to research drugs that could one day slow or reverse the course of Alzheimer’s.

The Arkansas native says the disease has affected her grandfather and great-grandmother.

For the 5.8 million Americans living with Alzheimer’s presently, decades of research have provided little hope.

“Drug discovery for Alzheimer’s has been very, very hard,” said Dr. Chunyu Wang, a biological sciences professor at RPI. “In the past 17 years, no new drug has been approved for Alzheimer’s.”

Dr. Wang is Eden’s professor on the Troy campus. Through their research on a compound known as C1, he and his students have potentially come up with a groundbreaking method of blocking the production of the amyloid proteins that are found in the brains of Alzheimer’s patients.

“If there’s no amyloid, there’s no Alzheimer’s disease, so our approach is to reduce amyloid formation,” Wang said.

Unlike past methods, Wang says this new approach won’t block other brain functions that can lead to intense side effects.

“They may have increased rate of skin cancer and they may have gastrointestinal disturbances,” Wang said. “In addition, the memory function of the patients got worse in clinical trials.”

The effects still must be studied on mice before human clinical trials can begin. That process could last a decade, with no guarantee of success.

“Whoever comes up with the first disease-modifying drug for Alzheimer’s, that is definitely going to be a blockbuster,” Wang said.

According to the Alzheimer’s Association, the disease is the sixth leading cause of death in the U.S. Given the alarming statistics, there are many families paying close attention to the research going on here.

“We feel very fortunate to do this kind of work,” Eden said. “At the end of the day, if I have something go wrong, I can go home and think that I have done something that will help society in a larger sense."