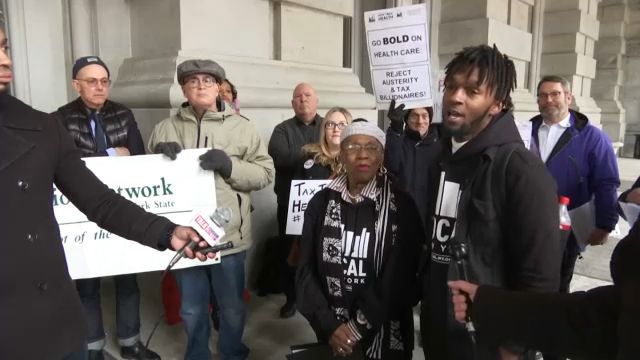 At Tuesday's annual People's State of the State Address outside the New York State Capitol, representatives from non-profits around the state called on the governor and legislature to use this year's session to institute policies they believe will help close the poverty gap.

“There’s no reason why 92,000 people should be homeless, why we should have child poverty rates around 50 percent in many of our cities," said Ron Deutsch, the executive director of the Fiscal Policy Institute.

Spearheaded by Hunger Action Network, organizations like Vocal New York and the Fiscal Policy Institute are pushing for more state funds to be spent on addressing homelessness and feeding the needy, expanding access to healthcare and addressing the opioid crisis.

“We need to make sure that Governor Cuomo and our legislature understands what is at stake,” said Vocal New York’s director of organizing, Jawanza Williams.

Seeing all of their goals come to reality may prove especially challenging as the state faces a more than $6 billion deficit, the largest since Governor Andrew Cuomo took office.

“We’re always told the same thing: There’s no money,” said Nathylin Flowers, a protestor with Vocal New York. “What liars you are. We are calling you liars. We know there’s money.”

"We have around 110 billionaires in New York State with a net worth of nearly half a trillion dollars,” Deutsch said. “Think about that; it’s nearly three times the size of our state budget.”

Despite the state's shortfall, the advocates believe now is a time to impose steeper taxes on the wealthiest New Yorkers to fund the social programs they're calling for.

"We are just asking those at the very top, the one tenth of one percent, to pay a little bit more, half a percent more on their income tax rates," Deutsch said.

With the legislative session starting this week, the advocates believe the state can't afford to wait any longer at enacting these measures.