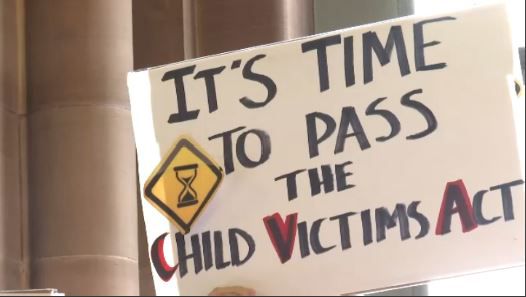 Some Survivors File CVA Lawsuits While Others Can't Find Lawyers

The Child Victims Act lookback window, which opens Wednesday, gives survivors whose statute of limitations have run out a one-year window to file a civil lawsuit.

The Child Victims Act one year look back window is officially opened.

What is it? It allows sexual assault survivors whose statute of limitations ran out the opportunity to file a civil lawsuit. They have one year, starting today, to do it.

Brian Toale says he's been working with others to explain the lookback window to other survivors who find it confusing. He's also been getting his own lawsuit ready.

Toale says he was repeatedly raped by his teacher during his senior year at the Long Island private school Chaminade.

"There were so many behaviors and beliefs and thought patterns that were associated with that secret that permiated my life," says Toale.

Toale has been in recovery for 25 years, and in 2016, he sent three letters to school administrators. They never responded. Besides financial compensation, Toale says he wants answers to how this happened.

But while some have been busy meeting with attorneys and getting lawsuits ready, others can't find lawyers to take their cases.

Mary Ellen O'Loughlin says she was sexually abused by her step-father and because the lawsuit won't be lucrative, she hasn't been able to find a lawyer.

"I feel what about me? And what about the others," asks O'Loughlin, adding, "Of course institutions are where the money is going to be. The individuals aren't."

But not all survivors have gotten lawyers. I spoke to Mary Ellen O’Loughlin who says no one will take her case. The reason? She is trying to file against her step-father, not a lucrative institution.

She says she expected this to happen. pic.twitter.com/veuBecChXS

O'Loughlin says besides wanting closure, filing a lawsuit is the only way to know if there are already, or could be in the future, other victims.

While she says she wants a lawyer, she isn't going to let the year long window go to waste, and is ready to file a suit herself if necessary.