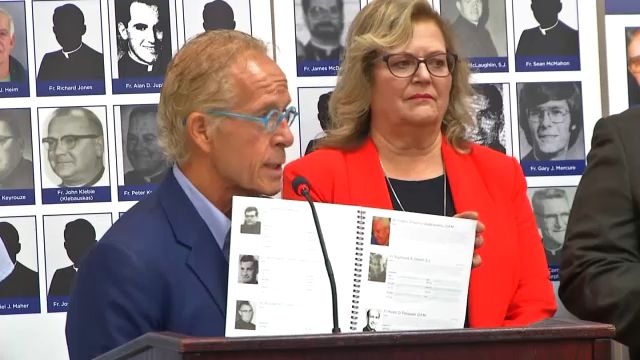 Now in his fifties, Mark Lyman was just 13 years old when he says he was first abused by his priest at St. Anthony of Padua in Troy. The pattern would continue for more than four years.

“I was groomed to think it was a normal reaction,” Lyman said Tuesday. “Those are things that we want to forget and we don’t ever want to remember.”

The man Lyman and his brother accused, Father Frank Genevive, pleaded guilty to sexual abuse in a Massachusetts court in 2008 and died six years later.

“I carried that luggage around with me for a number of years,” Lyman said.

Along with attorneys, Lyman joined two other alleged victims of sexual abuse in Albany on Tuesday to reveal the names of 83 Catholic clergy members who they’re accusing of sexual abuse. Some of the names are being announced publicly for the first time.

“The scary news is there’s so many more offenders out there, so the work today is just the beginning,” attorney Jeff Anderson said.

Jeanne Marron is one of at least 10 former Notre Dame Bishop Gibbons students accusing Brother James Vincent Hanney of abuse almost 40 years ago. While his current whereabouts are unknown, it is not believed Hanney has ever been charged by law enforcement.

“He was not specific for gender; he assaulted both females and males,” Marron said.

The group is urging the Albany diocese to reveal the names of all clergy who have ever been accused.

In a written statement, diocese spokesperson Mary DeTurris Poust said some of the names on Tuesday’s list are not deemed credible, but sympathized with the victims.

“Bishop Edward B. Scharfenberger and the Roman Catholic Diocese of Albany are committed to justice for those who have been sexually abused by priests and others in whom they put their trust,” DeTurris Poust said.

Despite what he’s been through, Lyman says his faith remains strong.

Now a father of four, Lyman says he’s committed to standing up for all victims of sexual abuse in and outside the church.

“Your voice is going to be hard, and what you have to say may empower someone else, and it may protect another child, and that is the goal here,” he said.