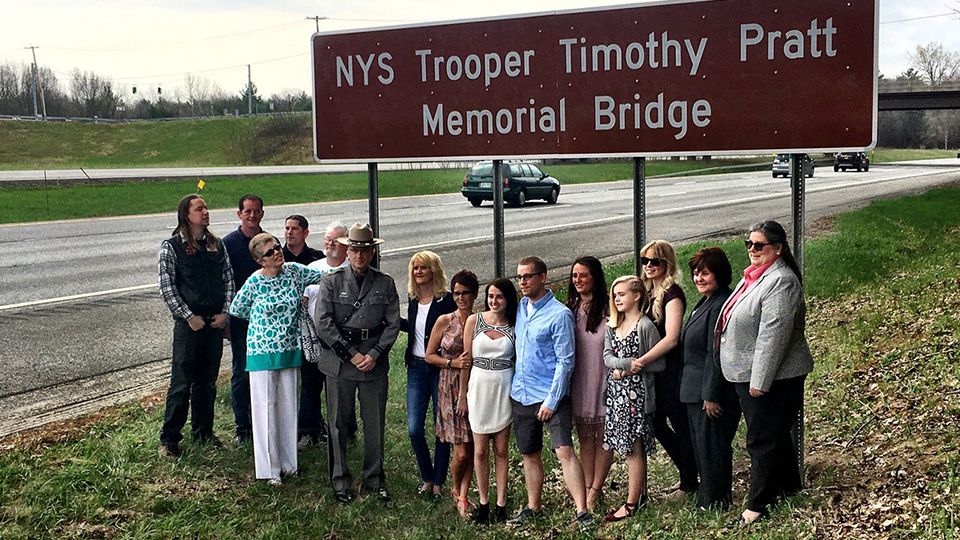 On Thursday, friends and family of Timothy Pratt dedicated a memorial near the spot where the fallen trooper lost his life in 2016. Matt Hunter reports.

WILTON, N.Y. - On the night of October 25, 2016, all that was on Susan Clarke’s fiancé Timothy Pratt’s mind was dessert.

“I thought he was asleep, and all of a sudden I hear from the other side of the bed, 'brownie sundae,' " groaned Clarke, doing her best to mimic Pratt. “I said 'I am not getting out of bed and making you the brownie sundae. Nope, not doing it.’ Off to bed he went.”

Showing restraint, Pratt went to bed hungry. The next morning on his way into work, the near-30-year veteran of the New York State Police was struck by a car and killed while helping a motorist along Ballard Road.

“Unfortunately on that morning, everything came together at the exact wrong time, resulting in a horrible tragedy,” said Major Robert Patnaude, the commander of New York State Police Troop G.

“Tim would not want any of us to be sad over his passing, as I stand here trying not to cry,” Clarke said.

Roughly a year and half after his passing, Pratt’s legacy is again being honored, this time with a memorial not far from the spot where he lost his life. On Thursday, loved ones and former colleagues dedicated the Ballard Road bridge spanning the Northway at Exit 16 as the “New York State Trooper Timothy Pratt Memorial Bridge.”

“If you look up the definition of 'public servant,' there should be a picture of Trooper Pratt beside it,” State Senator Kathy Marchione said during the dedication ceremony.

“This bridge dedication dedication will never end the sorrow or loss felt by so many of us, but it does show our appreciation of his service and the ultimate sacrifice he made,” Patnaude said.

In addition to Pratt’s service, his fiancée hopes the bridge will remind passing drivers of the way he lived his life.

“When you pass this bridge, smile for Tim because that is what he would want,” Clarke said.

The bridge dedication was one of many tributes to Trooper Pratt. Last year’s South High Marathon Dance -- an event his name was synonymous with for many years -- was held in his honor.