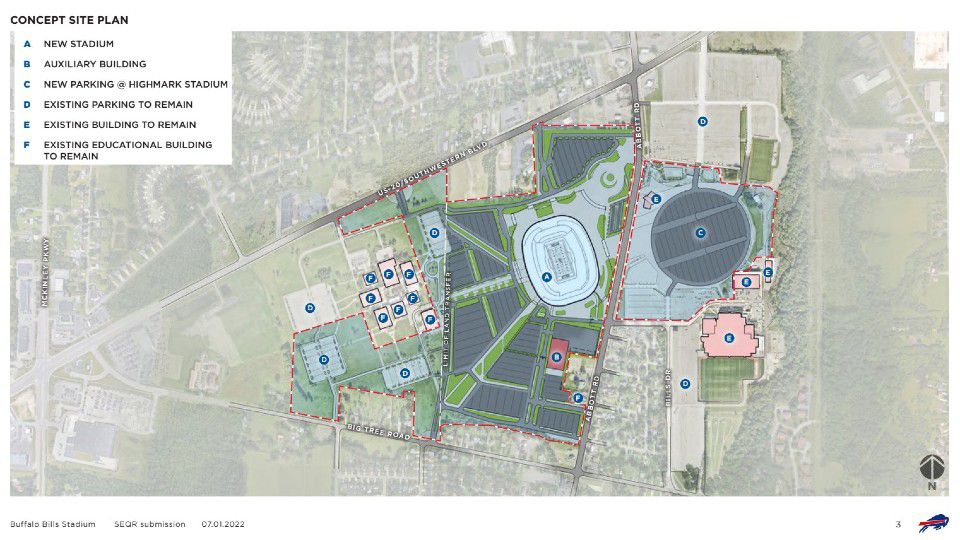 ORCHARD PARK, N.Y. — The public is getting its first look at what the new $1.4 billion Buffalo Bills stadium site could look like and specifics on where it will be located.

A specific design of the new facility was not part of Friday’s announcement by Erie County, but documents released show how 283.42 acres of land will be used for the new home for the team, which is expected to open in 2026.

The plan was released as Erie County begins its State Environmental Quality Review, or SEQR, of the proposal. Its purpose is to measure the impact of the proposed plan on the environment, as well as traffic and parking impacts.

The new facility would be built across the street from Highmark Stadium on Abbott Road between Southwestern Boulevard and Big Tree Road, where Lot 2, Lot 3 and the current bus and limo lots are located.

A large plaza is part of the plan, as well as a new operations building south of the new facility and a number of new parking lots.

In addition, nearly 56 acres of land currently used by ECC South Campus will be taken over, but none of ECC's buildings will be impacted.

"The plans are such that there would not be a building at the college taken,” said Erie County Executive Mark Poloncarz. “A lot of people thought they would have to demolish buildings at the college. We said, ‘no, we know we don't have to do that.’ And the site plan that was released today shows that. The stadium and the parking lot that is a result of this new construction do not need to take any building at that site. It is exactly what I said it would be. And it is important for the public to see what we said was going to happen is going to happen."

In the meantime, the current stadium would be demolished and turned into a large parking lot for fans going to events there.

That isn’t expected to take place until after the new stadium is already operational, with the expectation that parking for events initially will be impacted for some time while demolition and construction of the new lot takes place, so temporary options and alternatives will likely be needed for fans for a period of time.

Some current buildings, including the Bills Store, the AdPro Sports Training Center and the Delaware North commissary building, will remain in their present locations.

The SEQR process is expected to take roughly six months to be completed, and the firm Populous continues to work on the actual design of the facility, but nothing has been released yet from them.

A public scoping meeting will be held on July 14 at the Bills Field House, while an additional public hearing is tentatively scheduled to take place in September.