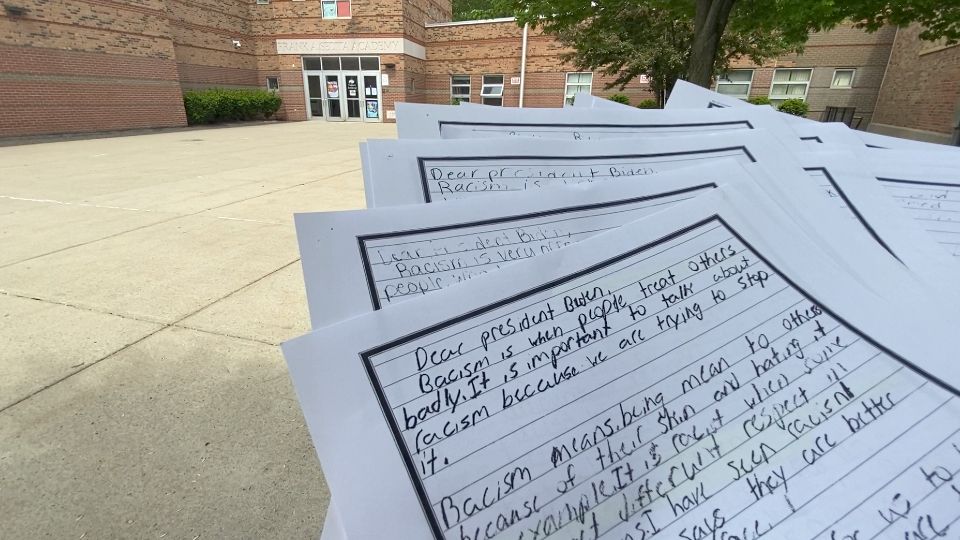 Buffalo fifth-graders call on President Biden to act on racism in U.S.

BUFFALO, N.Y. — When the violence hit home in Buffalo on May 14, there were calls for change. Now those calls are being heard through the words of the children of the Queen City's P.S. 30.

“They understand those big words: Discrimination. Segregation," said Selena Borek, a fifth-grade bilingual education teacher at the Frank A. Sedita Academy. "They get it. They've seen it. They faced it.”

The Monday after the mass shooting at Tops on Jefferson Avenue, there was a heaviness in the air in Borek’s classroom.

“Some were crying,” she said. “Some were angry. Some didn't want to talk at all.”

She took those emotions and funneled them into letters to President Joe Biden.

“It's usually not their favorite class, but they stayed writing for about two and a half hours,” she laughed.

After President Biden visited the area last week, they wanted to see him do more.

“If we send him these letters that say we're from Buffalo, maybe he will read them,” Borek said. “Maybe he will see that there's kids asking for help from the community he just visited.”

Selena Borek’s 5th graders are calling on @POTUS to act on racism in the U.S. after the Tops mass shooting.
Here are Yexiel Figueroa and Laila Coronado, both 11 years old, reading their letters. Both amazing and disheartening how much these kids know. Full story on @SPECNews1BUF pic.twitter.com/RdIWfC1C8D

The students at the Sedita Academy are mostly Hispanic and biracial. Racism is something they have unfortunately experienced.

“I have experienced racism when my neighbor wanted my family to move because we were Hispanic," Borek read from the letters. "I have seen racism when I heard about George Floyd.”

May 14 brought it all back.

“You could tell that it was almost therapeutic for them, I think, to write, 'hey, this is what racism is — just how it impacts our community. This is what I want you to change,'” said Borek.

It's a simple thing, but it's powerful.

“In conclusion, racism is disrespectful and rude," Borek read from another letter. "As our president, you need to help people understand racism to stop bullies.”

The students asked Biden and the nation to talk about racism, give communities more resources and pass more laws addressing the plague of racial violence.

“That's what kills me the most is these 10-year-olds, 11-year-olds, are able to communicate so clearly what's wrong and name solutions to look into," Borek said. "And people in power just ignore it.”

The pleas from these students hit even harder following the mass shooting in Texas, which left at least 19 kids and two adults dead.

“No other country has to go through this,” said Borek. “No other group of students has to go to school and ask their teacher, 'what do we do if there's a shooter in our school?' I mean, the kids get scared and it's reasonable. I don't think people understand the psychological impact that has if you're not seeing it every day.”

As a teacher, Borek can only do so much to keep her kids safe.

“It can be really hard to see what they go through and know that you can't fix it for them,” she added.

The letters her class wrote were signed and shipped off last Friday, sent along with the hope of our nation’s future.

“I think they felt this glimmer of hope during what has been a really rough couple of weeks for all of our community,” said Borek.

Borek reached out to local and state representatives to flag these letters for President Biden.

She would love to get some sort of acknowledgement back, whether a letter, photo or even Zoom discussion.

If they are able to help push along real change, even better.