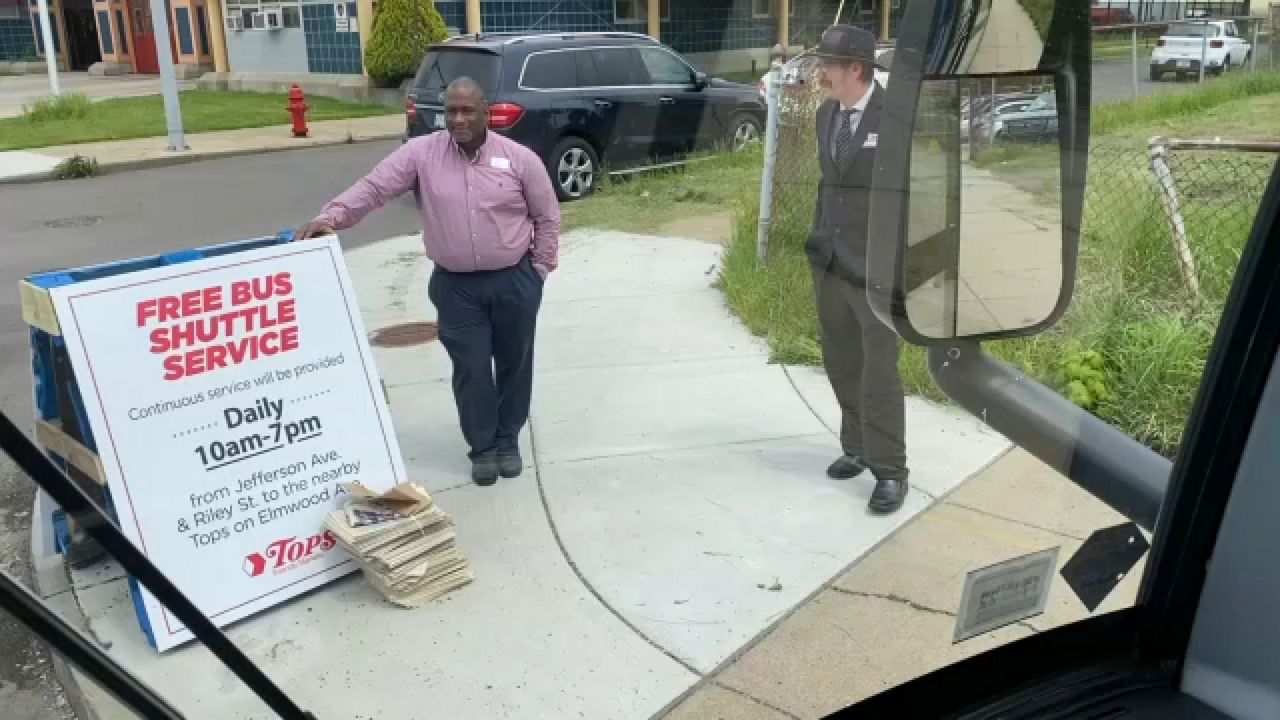 Now, the area is essentially a food desert, but Buffalo’s East Side is a tight-knit community and everyone is trying to help out. That includes Virgil Hamm, who used to manage the Tops on Jefferson Avenue.

“Anybody need a ride for the bus today? For Tops,” he asked while walking around the area.

He was trying to direct people like Daysi McGill to a free ride to the store.

She helped bring Tops to Jefferson Avenue back in 2003.

“It was a very big deal, she said. “Now that you’ve had a chance to go through this, you know there’s nothing else available anywhere.”

When that closed, she turned to the shuttle to get her to the next closest Tops on Elmwood Avenue.

“Several of my friends that live in the building [...] they said, 'how long do you think the store is going to be closed?' and I said, 'I don’t know, it’s a crime scene. It's not going to be open next week.'”

You can catch the shuttle on Jefferson and Kingsley every day from 10 a.m. to 7 p.m., until further notice. You can expect that trip to last an hour and 15 minutes: 15 to get there, 15 to get back and 45 minutes for you to spend shopping.”

“All I gotta do is look out the window and see the bus,” said one passerby.

There were just a few passengers the past few days. Possibly because of the food giveaways just down the block and possibly because people just aren’t ready to go the store.

“You always have it in the back of your mind that things could happen," said McGill. "Things have happened before.”

McGillwanted to leave the resources giving out food to others. Instead, she got the shuttle all to herself, with a special drop off right at her door.

Whether it’s through the shuttle or the other groups helping in the area, everyone’s happy to see this area is being taken care of.

"It’s nice to see the community come together," said Philip Slazyk, a driver for Niagara Scenic Tours who was running the shuttle Wednesday. "It proves to you that you can overcome anything as long as we’re willing to step up and do the right thing.”

Saturday's tragedy showed the worst, but it’s bringing out the best.

“I know that people are good. I do. In my heart, I know that,” said McGill.

With McGill home with all her supplies for a fruit salad, she’s spreading that message.

“Get on the shuttle, the driver’s a doll,” she told other residents.

They said their goodbyes and then the guys headed back out.

“Keep the show on the road,” remarked Hamm.

They're ready to take at least one thing off the worry list for the East Side.

As for McGill, she said she told some of her neighbors she was trying the shuttle, joking that she was the guinea pig. Now she’ll tell them just how it all worked, so they can use it too.