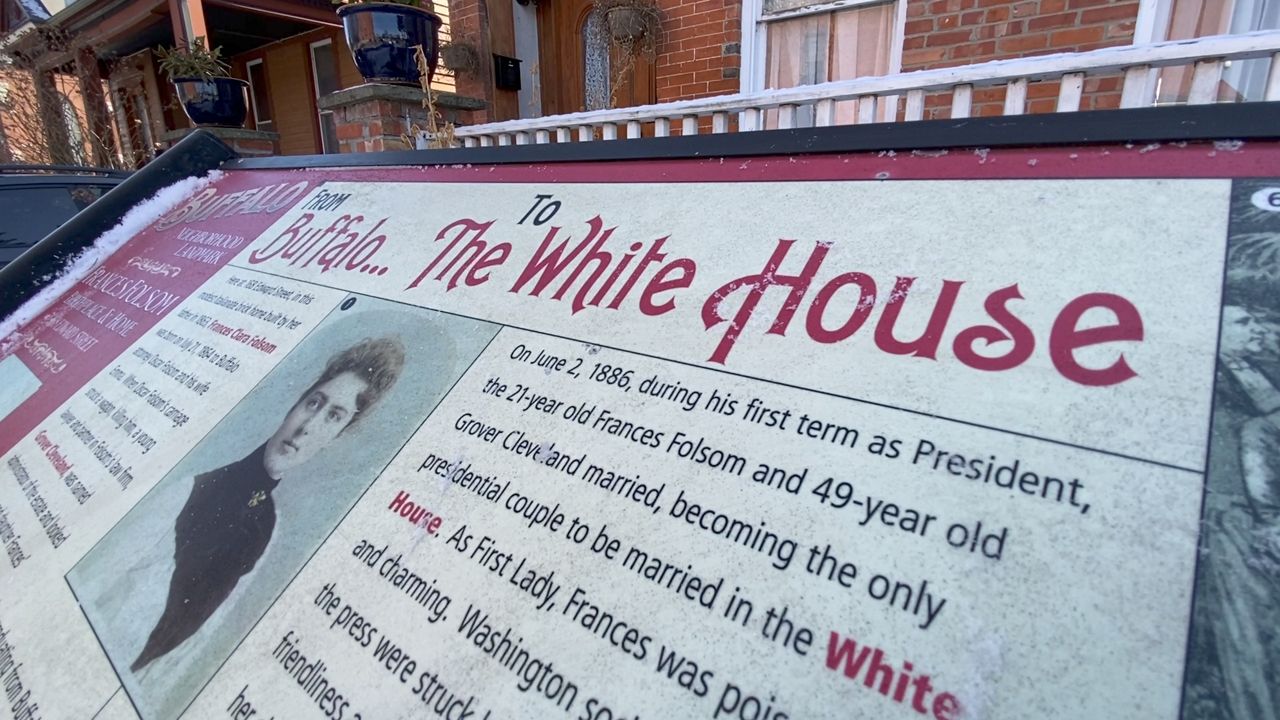 BUFFALO, N.Y. — You might already know some of the rich presidential history Buffalo has.

After all, one author said that, "outside of Washington, D.C., Buffalo has the richest presidential history of any city in the country." But did you know the city was home to two first ladies?

You might know their husbands: Millard Fillmore, the 13th U.S. president and Grover Cleveland, who served as the 22nd and 24th U.S. president. But what do you know about the women behind them?

“We know that they are very important figures in their very own right," said Linda Brigance, Board of Trustees president for the Buffalo Presidential Center, as she gestured to a display. "It's up to us to uncover those stories and tell those stories and present that to people, especially the young people.”

On the walls of the Buffalo Presidential Center are parts of these women's stories. The first Buffalo first lady, Abigail Powers Fillmore, met Millard when he was her student.

“Millard was 19. She was 21," explained Bren Price, a trustee for the Buffalo Presidential Center. "She taught him for a while and then they became romantically involved.”

They moved to Buffalo and Fillmore eventually, Millard became president.

In D.C., Abigail’s love of education endured. She pushed to create the first permanent library at the White House. More than 40 years later, Buffalo-born Frances Folsom Cleveland made her own mark.

A friend of Frances’ father, Grover Cleveland was like a mentor to her, but that became more. They had the first White House wedding and, to this day, she remains the youngest first lady.

“Frances Folsom was just the darling of advertisers. She wouldn't have had control of her image," said Brigance, showing off a display of Frances-related memorabilia. "First lady cigars, two for five cents. Handmade, mild and pleasing.”

A beloved fashion icon, many compare Frances to Jackie O or Princess Diana, though she also supported women’s groups, from the Women’s Christian Temperance Union to the New Jersey College for Women.

“The president has other venues that he's always dealing with and they can deal with more of the social side, the humanitarian side,” Price explained.

The women were, however, a product of their times.

“Frances Cleveland, for example, who was this role model for a lot of young women...she was not an advocate of women's suffrage,” said Brigance.

In Abigail’s case, it was discussing matters of state and trying to steer her husband from bad policy.

“He really valued her opinions,” said Price. "She actually advised him not to sign the Fugitive Slave Act and said it would ruin his career if he did. Of course, we know that he did sign it. And in fact, she was right.”

These women and their husbands were far from perfect.

“We're proud of them and that they had a connection to Buffalo...the good, the bad and the ugly,” said Brigance.

Through that all, there is a chance for inspiration.

“As they get down [the line of displays] and they see the focus on the women, yeah, they're really shocked," said Brigance. "Especially the little girls! That's very cool.”

It could fuel the next generation to want to be up on the walls of the Presidential Center, maybe even as a commander-in-chief themselves.

If you want to learn more about these Buffalo First Ladies, or other women who were influential on the presidency, check out the Buffalo Presidential Center, located on the second floor of the Buffalo and Erie County Public Library. It is open Saturdays from 10 a.m. to 4 p.m.