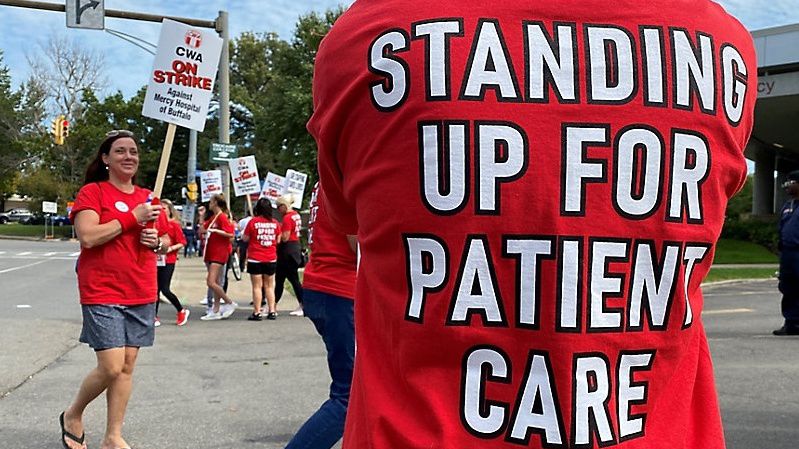 BUFFALO, N.Y. — Catholic Health and CWA Union members say they have reached a tentative agreement on a four-year contract.

If the new contracts are ratified, it would end a strike that has continued for more than a month.

Catholic Health says the agreement is on six contracts covering close to 2,500 associates. Mark Sullivan, Catholic Health's CEO, says it addresses both wage and staffing concerns brought by the union.

“We listened to our associates and their primary concerns were market-competitive wages and increased staffing,” said Sullivan. “These new contracts address both and more. We are ready to welcome our caregivers back to Mercy Hospital.”

Catholic Health says the strike ending would mean Mercy Hospital will be releasing a plan to restore services that were temporarily suspended.

Ratification meetings will be held to inform CWA union members of the details of the tentative agreement this Saturday and Sunday. The union says the goal is to get workers back to their jobs by next Wednesday.

"We are very pleased with the tentative contract agreement we have reached with Catholic Health System. We have stressed from day one that frontline workers’ overriding concerns are sufficient staffing to ensure high-quality patient care, and a compensation package adequate to allow Catholic Health to attract and retain the staff needed to obtain staffing improvements. This contract achieves those major objectives, with historic breakthroughs in guaranteed safe staffing ratios, substantial across the board wage increases, including bringing all workers above $15 an hour, and preserving health and retirement plans intact. Hundreds of new workers will be hired under this agreement to remedy dire staffing shortages.

Our members, the frontline nurses, technical, service and clerical workers at Catholic Health, made incredible sacrifices over the last five weeks to stand up for high quality patient care in Buffalo, and this tentative agreement is a tremendous victory that sets new standards in care for the region. We salute the determination and fighting spirit of our members, whose commitment has produced an outcome that will be completely transformative for patients, workers and the Buffalo community.”

"No one has put more on the line during this pandemic than those on the front line, and I was proud to stand with the health care workers at Mercy Hospital earlier this month in their fight for the wages, protections, and benefits worthy of the life-saving work they've done.

"I have spoken to both parties several times since the beginning of the strike, and my team has been in constant contact with the workers as well as hospital management working toward tonight's resolution.

"This contract could be a national model for recognizing our health care workers, and I urge both sides to make their agreement permanent as soon as possible so that together, Mercy Hospital and its workers can continue to play their critical role in servicing and caring for the Buffalo community."

New York Attorney General Letitia James had this to say:

"I am pleased that the hardworking members of CWA reached a tentative agreement with the Catholic Health System and are finally getting the treatment they deserve. These workers put their lives on the line every day to support New Yorkers through this pandemic and beyond, and it’s about time they get treated with dignity and respect. We will continue to stand together to fight for our workers and ensure they have the real pay, real support, and real safety that they deserve."