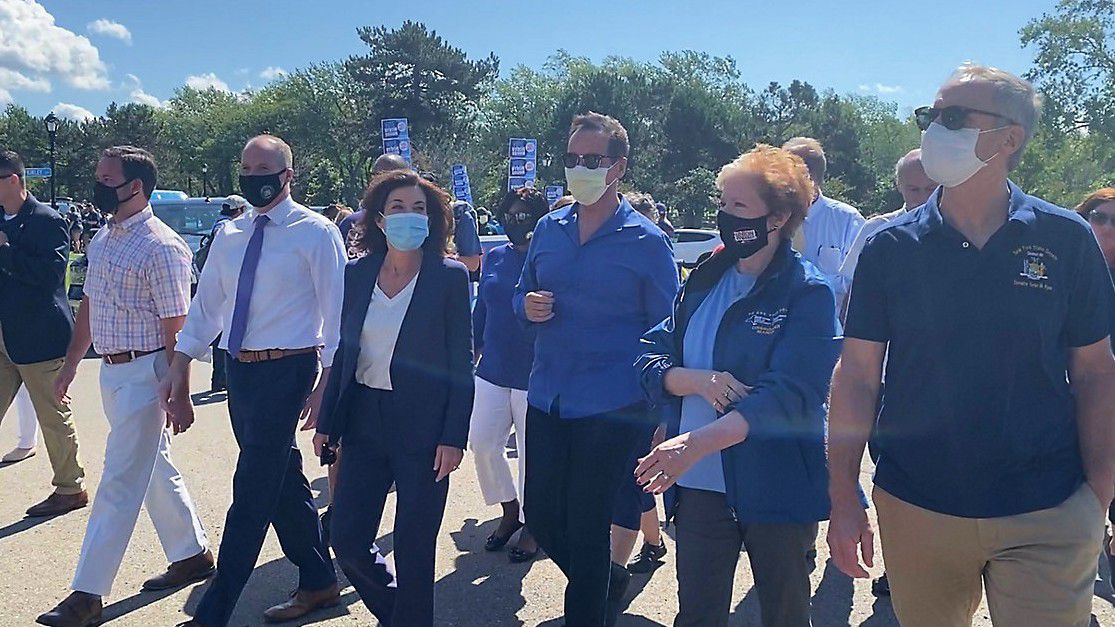 Gov. Kathy Hochul was back at home in Western New York for Labor Day. And in celebration of the holiday, she signed a handful of legislation meant to protect workers across the state.

“There is nothing more wonderful than having a Labor Day celebration started by having the governor of New York state, in our community, in her home,” said Debora Hayes, the Upstate New York area director for the Communication Workers of America.

It was where Hochul signed the legislation, which would initiate a program putting speed monitoring systems in work zones, make sure subcontractors get the pay they are entitled to, require co-ops and condos that get tax breaks to pay a prevailing wage to building service employees and lift the cap on shared work benefits from 26 weeks to an amount equal to 26 weeks. That way, people can get part-time jobs without losing their unemployment.

Gov. Hochul talked about her family’s roots with unions, saying we need to celebrate labor and those who keep this country running day in and day out.

Hochul also signed a directive that categorizes COVID-19 as a contagious disease that poses serious harm to public health. That means the safety plans employers created after former Gov. Andrew Cuomo signed the New York HERO Act in May can now be implemented.

“Back when this was signed, we all had this vision that the pandemic would be behind us. That didn't happen,” Hochul explained.

All of this was a welcome gift for many unions this Labor Day.

“We represent a lot of healthcare workers, but we also represent folks in Verizon, and AT&T, and crisis services, where you're frontline with people every day," said Hayes. "It is critical that when our people go out to work our members go out to work we know that they have maximum protection around them.”

After the signing, Hochul joined in the parade, marching alongside local unions.

People from mail carriers to health care workers walked through Buffalo, carrying banners and handing out candy to bystanders.

Participants said the pandemic really helped show them how important the labor movement is.

“It's all about dignity and respect and to advance people's lives have a better lives," explained George Harrigan, the principal officer/secretary/treasurer of Teamsters local 449. "That's what we're out here today, to make sure we fly our flag and everybody remembers what labor is all about.”