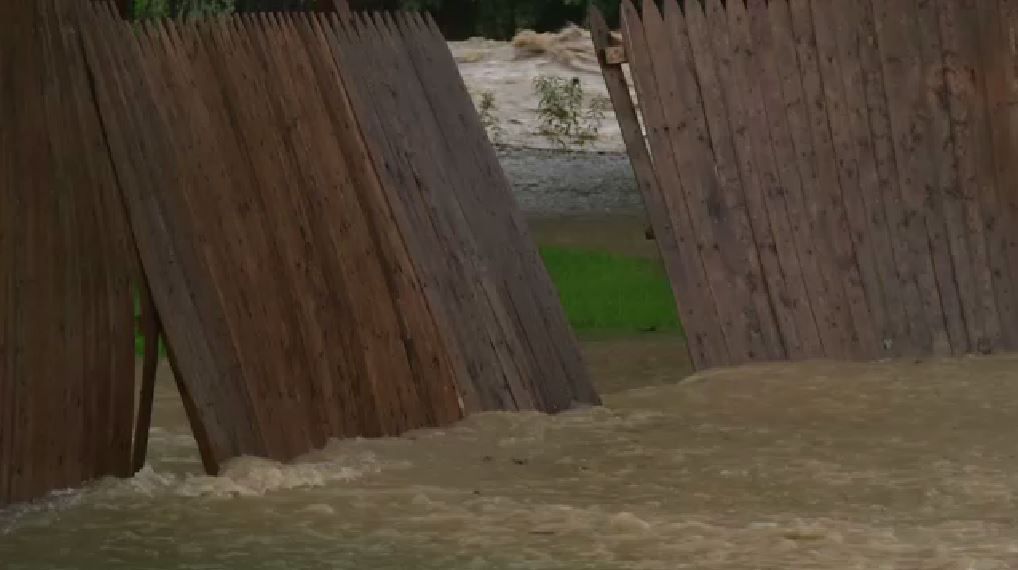 Governor Cuomo has toured parts of the Southern Tier hit hard by flooding. Some parts of the region saw five inches of rain fall in less than three hours Tuesday morning, leading to severe flooding.

According to the Broome County executive, about 30 roads were closed throughout the county. Flood waters made numerous streets impassable. There have were numerous reported rescues from cars and homes as people found themselves stranded.

The fear now for area residents is that the creeks and waterways can't handle any more rain. The rain has come in random spurts and its impact is unpredictable.

Governor Cuomo says the most efficient thing people can do right now is being alert, pay attention and remember that they are the first line of defense.

“The first responders are always the people in your own home, and you have the first responsibility for your safety,” Cuomo said.

State officials will make sure extra resources are available for struggling communities. The state has pumps, vehicles, boats, generators and other equipment all on standby.

Governor Cuomo issued a state of emergency for portions of the Finger Lakes, Southern Tier and Central New York, which will remain in effect through next Tuesday, August 21.

Shelters were established in the most impacted regions.

There have been several water rescues because of flooding in Conklin, where there was a mandatory evacuation in place at the Fountain Blue Mobile Park. Broome County Executive Jason Garnar says that 75-100 people were impacted.

The most devastation in Broome County due to flash flooding has happened in Conklin, Kirkwood and Vestal.

Broome County has activated its Emergency Operations Center, as the county executive declared a state of emergency due to the flooding.

Officials closed Route 26 -- a major roadway in the region --  but it has since reopened.

Route 26 at this intersection is now closed pic.twitter.com/57ZjpaoVEA

According to Garnar, about 30 roads were closed throughout the county. For a full list of Broome County road closures, head to their website.

Due to flooding in #BroomeCounty - The Broome County Emergency
Operations Center (EOC) has been activated.

The state of emergency is to partly keep people off the roads. It also means there is no recreational use of waterways in the affected counties. Garnar also issued an emergency order of "no unecessary travel" for the county.

Heavy rain & flash flooding continues - STATE of EMERGENCY for #BroomeCounty continues and effectively IMMEDIATELY, I have issued an Emergency Order of "No Unnecessary Travel in Broome County". @BroomeEmergency

Many have expressed concerns about the Dick's Sporting Goods Open that starts Wednesday, and even though the grounds crew posted a picture on Twitter saying a little rain won't stop them -- the event will be delayed.

They have a crew working around the clock removing excess water from the course.

In Binghamton, underpasses along Court Street were flooded, forcing crews to shut down parts of the road.

The hardest hit area was right by a Burger King. Water quickly rose around the restaurant forcing workers to take quick action.

This is the scene at a Burger King on Court Street in Binghamton. I just spoke with eight workers who were helped out safely by firefighters when water started flooding in. pic.twitter.com/f2RXIbXUdy

Firefighters made sure eight people in the restaurant were able to get out. Flood waters made their way into the back of the store, but employees say the damage is not serious.

States of emergency have been issued across several Southern Tier counties due to heavy rains causing flooding and road closures. @NYGovCuomo is surveying the damage in #SenecaCounty. INFO: https://t.co/McqX2G38gw pic.twitter.com/tHdrKW5o6v

About 50 people in the town of Lodi were trapped Tuesday morning after flood waters washed debris onto Route 136. The fire department went into help, but got trapped as well.

*Travel Advisory*
The SENECA County Sheriff’s Office reports that heavy rain has resulted in major flooding in the Towns of Covert, and Lodi. Seneca County Sheriff Tim Luce reports at this time, no unnecessary travel is advised. All residents are advised to shelter in place.

"It's amazing the devastation.  It's not just water.  You have about a quarter of a mile of trees and debris and stumps.  We need heavy machinery to move these trees and stumps etc, so we can get to the people,” said Cuomo.

. @NYGovCuomo urges New Yorkers affected by flooding to stay safe — even if that means evacuating their homes. MORE: https://t.co/McqX2G38gw pic.twitter.com/rmsur3HuLF

Cuomo says heavy equipment is being brought in to clear the road.

In the meantime, boats are going across Seneca Lake and taking people to the state park on the other side. Once the road is clear they expect to be able to get the fire equipment out.

Possibly the worst damage is on Route 89 in Ovid after the floods split the road in two. Parts of both sides of the road were washed away in the flood.

The State Department of Transportation is assessing the damage.

Schuyler County is also under a state of emergency.

The sheriff's office issued the advisory and is urging the public not to travel unless absolutely necessary as there were several road closures in the area.

The rain has really hit parts of Schuyler County. This is just one of the falls thats is gushing water pic.twitter.com/nYilUomxFg

In places like Wellsburg, some neighbors say more than two feet of water came into their homes Monday night.

Major flooding in Wellsburg. A number of first responders are out. This as rain continues to fall. pic.twitter.com/mJjcA6gFBk

Bradford County has also dealt with road closures in and around Troy.

“We've been giving warnings to a lot of residents that live in the low lying areas and next to the creek beds that the water is rising, so to be ready for a possible evacuation,” Moss said. “We're probably going to have to leave a small contingency down here just in case so we can keep an eye on the water levels and make sure they stay down to where they're manageable.”

Meanwhile, for anyone seeking shelter from flooding, the Red Cross has opened a safe haven.

The doors are open at New Beginnings United Methodist Church on East Miller Street in Elmira. It will remain open with around 100 cots.

“We have volunteers that have made themselves available as well. We've brought in our shelter trailers and we're going to make a home for potentially 100 different residences if they choose to seek refuge,” said Fingerlakes Chapter Executive Director Brian McConnell.

If you do plan on staying, bring things like medication, extra clothing, hygiene supplies and electronic chargers.

The Chemung County Humane Society and SPCA was closed Monday due to flooding, but they posted a video to Facebook, saying all of the animals are safe.

The shelter had to lay sandbags outside of its front entrance, as water surrounded the property.

They say they do have a plan in place in case they need to evacuate, but as of Monday night, the building was still dry.

The rain left streets flooded in Horseheads Tuesday. It was barely passable from all the rain.

The usually quiet creek that runs behind the houses there is now well beyond its banks -- causing widespread flooding.

A state of emergency was declared in the town of Hancock, but this time it appears to be mainly as a precaution.

Officials are keeping an eye on the Bear Brook Dam.

They say last Thursday, water crested over the top of the dam during severe rainfall, leading to extensive damage to both the brook and the dam itself.

The dam is located on the old village of Hancock reservoir and is privately owned, but the state of emergency allows local officials to gain access to the property.

It also allows state and county officials to request the necessary assets to mitigate the situation if needed.

They say the dam is not in danger of failure at this point in time, but if evacuations do become necessary, residents living below the dam will be notified.