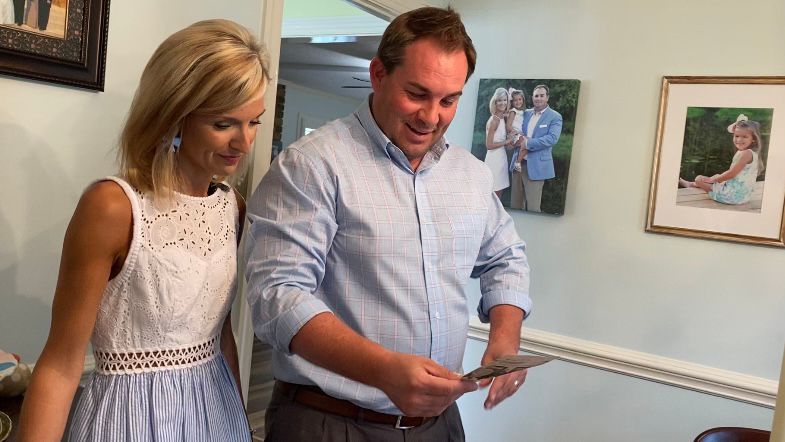 'It’s a family thing': Campaigning for office is a team effort at home

GOLDSBORO, N.C. — For every elected official, there’s always the first election they won.

For state Representative John Bell, that was a decade ago when he was a newlywed.

His wife, Kelli, has helped him campaign across his district for the last decade

This year, Bell is unchallenged for his seat in the State House

His wife, Kelli Bell, says it was a quick turnaround from their wedding day to the campaign trail.

“Maybe a year? I think it was a year. A year was August,” Kelli Bell said. “So this was the May after, because the primary was in May then.”

Rep. Bell, who is a Republican, is the House majority leader. This year, he’s unchallenged for his seat, both in the primary and general elections.

Over the past decade, however, he says it’s been a team effort with his family to continue to win.

“There were times where Kelli would have to fire departments and events and speak on my behalf,” John Bell said.

Kelli Bell says it’s a busy life, between elections every two years, work at the General Assembly during session and their home life with their daughter Averi.

“Day to day it’s just ‘Hey, what’s your schedule?’ At the beginning of the week we would try to “Where are you going to be? Here? What day?’ And you just kind of roll with it,” Kelli Bell said. “So you can’t really have a consistent schedule, which if you’re a Type A person like myself, you kind of have a hard time with that.”

There’s many sides to a campaign that constituents don’t see, aside from the campaigning, that spouses and family members do.

Kelli Bell says she doesn’t think people know the emotional side that can come with the job for those close to the candidates.

“They attack the candidate, but at the same time it’s a family thing. So the whole family is affected, whether it’s a negative mailer or anything.”

Even though the Bells will continue to campaign for fellow Republicans after the primary election, Kelli Bell says it’s nice having a season off from their own race.

“It’s a breath of fresh air. You don’t have to worry as much, but still it’s important that we get the right folks elected,” Kelli Bell said. “So you’ll still be all over the state trying to help other candidates, raise money and get elected. So it’s going to be another hard working election year, and they’ll still be places to go, but at least we don’t have that stress of what’s coming in the mail, you know, who our opponent is. So it’s easier on us.”