With a crowded field, Democrats have a lot of options to choose from when picking their presidential nominee.

Who might do best in the Tar Heel State? Which candidate do the voters prefer? Many voters across the state who spoke with Spectrum News said they so far have not decided.

However, in interviews, one name popped up more often than others: former Vice President Joe Biden.

“I hope Biden gets the nomination,” said David Williams, who lives in Wendell.

"I’m partial to Biden still at this point,” said Marvin Spencer, a voter from Hamlet. He cited Biden’s experience serving under President Barack Obama as a selling point.

Those voters are not alone. A poll from the Civitas Institute, conducted at the beginning of August, shows the former VP leading the pack among likely Democratic primary voters in North Carolina.

In the poll, Biden got 36 percent support. Sen. Bernie Sanders and Sen. Elizabeth Warren rounded out the top three, with 15 percent and 13 percent, respectively. The poll, conducted Aug. 1-5, had a margin of error of plus-or-minus 6.1 percent. 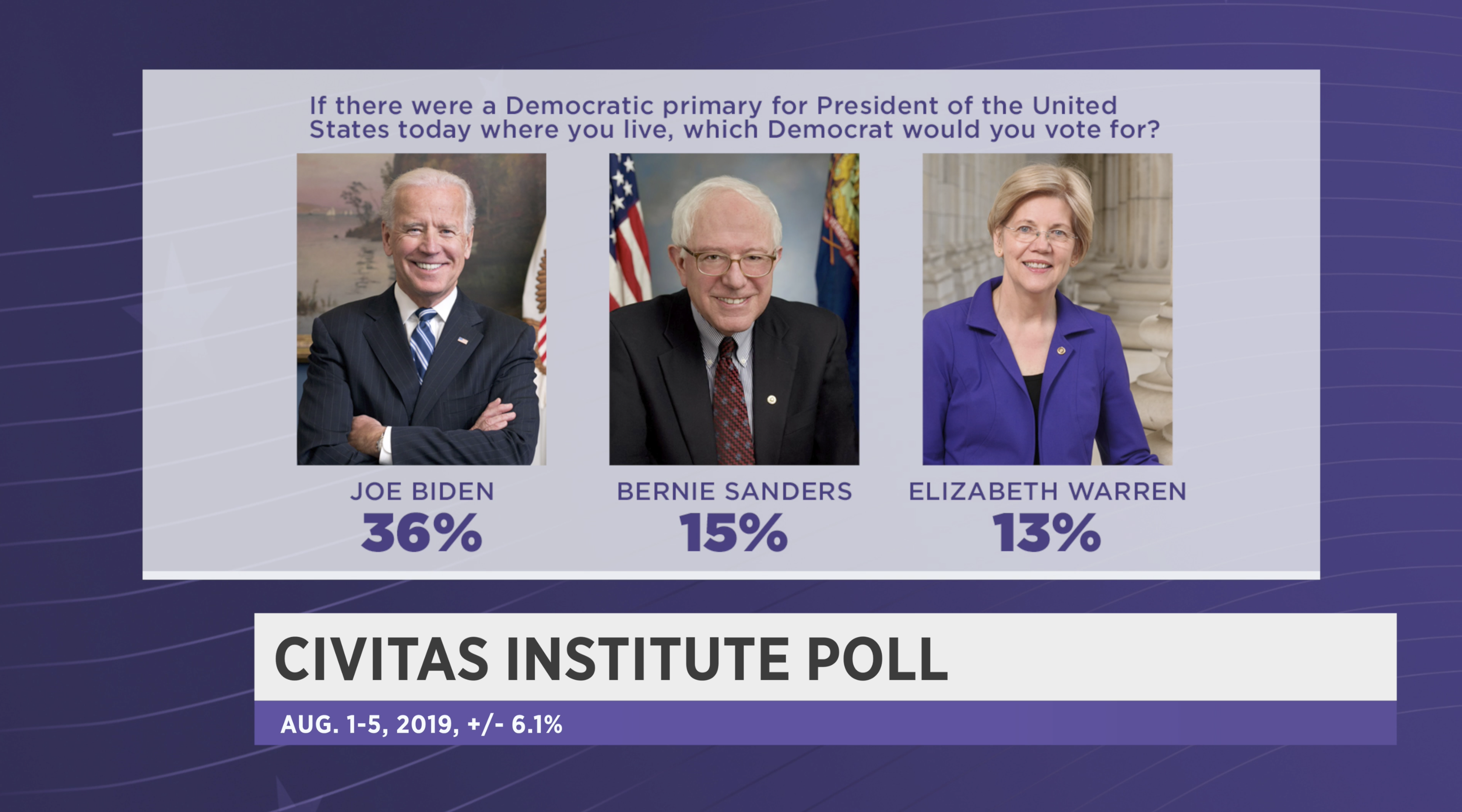 Some Democratic county chairs also voiced support for Biden, arguing he is more electable in a swing state like North Carolina than his more progressive rivals.

“I think Biden will still resonate with Caswell because this is a very conservative black and white community,” said Mary Susan Jesserer-Poore, chairwoman of the Caswell County Democratic Party.

The Biden campaign itself has made electability part of its message. “We have to beat Donald Trump, and all the polls agree - Joe Biden is the strongest Democrat to do the job,” said the announcer in one recent Biden ad.

Across the aisle, some Republican leaders seemed to buy that electability argument, labeling Biden potentially the biggest threat to President Donald Trump.

“If Joe Biden were to make it through the primary, and if he can stay on his own message, then I can see where he could be a challenge,” said Mark Edwards, chair of the Nash County GOP.

Some Republican Party county leaders who spoke with Spectrum News relished the idea of Trump facing a more progressive candidate. Others panned the whole Democratic field.

“Given the far left extremism that they all seem to support, there’s not a single one of those candidates that I feel presents a significant challenge to Donald Trump,” said Wayne Schaeffer, chair of the Bladen County GOP.

Of course, it goes without saying, the primary election is still a long way off. Biden benefits in part from name recognition that other candidates do not have.

Across North Carolina, Biden was not the only name floated by potential voters who spoke with Spectrum News. Some looked to the women in the race, such as Kamala Harris and Elizabeth Warren.

“Kamala Harris. Not because she’s a female but it's time for a change,” said Edward Scott of Lumberton.

“I’m ready to see something more progressive in this nation than the average Joe,” said Kaleb Geisler-Zukaitis, a student from Asheville.

Heading into election day, Democrats face several key questions, including what happens if the nominee ends up coming from the moderate wing of the party, like Biden? Would progressive voters still back him come the general election?

Geisler-Zukaitis said he would. “Because I think it’s time for Trump to be out of office, I think he’s polarizing the nation,” he said.

Alternatively, what if the Democrats end up with a more progressive nominee? Could that turn off more moderate voters? In a purple state like North Carolina, where every vote counts, that is not an insignificant question.

“Regardless really of who’s on the ticket, I think people understand fundamentally what this election is about,” said Lee Franklin, field director of the Watauga County Democratic Party.