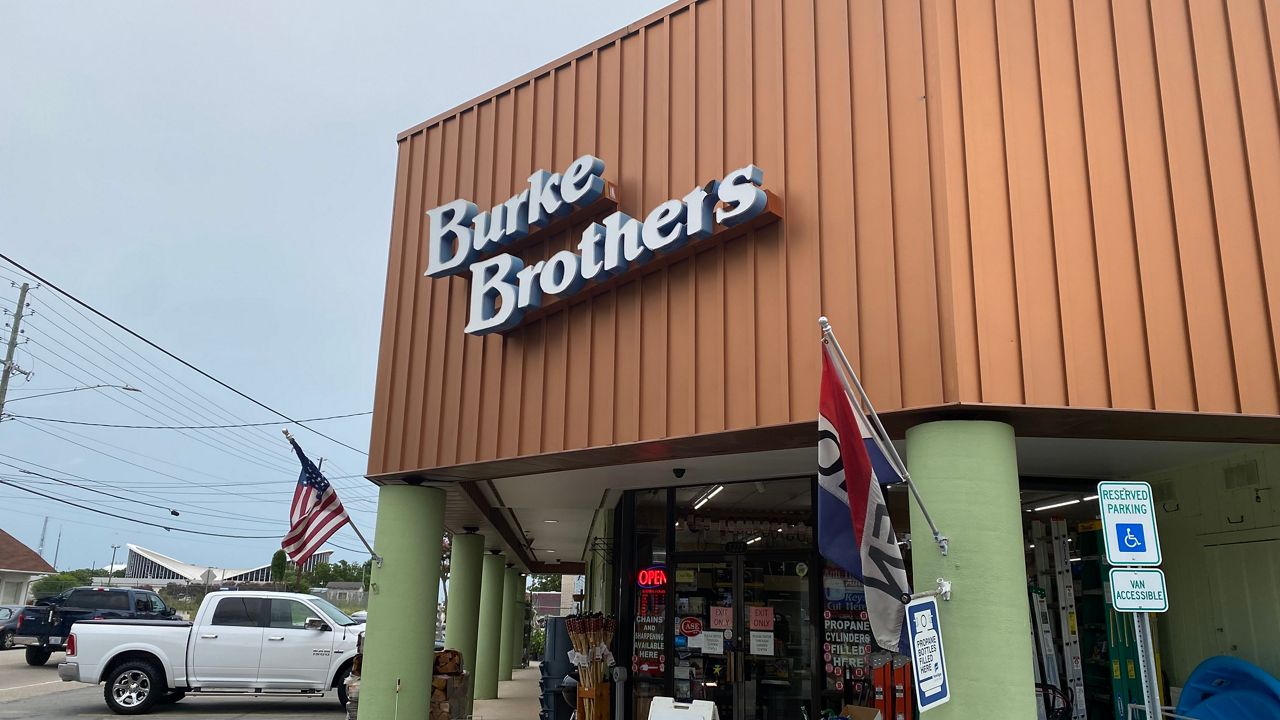 RALEIGH, N.C. — Preparing for a storm happens long before the dark clouds roll in during the Atlantic Ocean hurricane season.

The Burke Brothers Hardware store has been family-owned since 1936

Jeff Hastings took over more than seven years ago

Weather and consumer buying habits are linked according to NRF report

Burke Brothers Hardware is one of those go-to locations people turn to before inclement weather. That's true for not only customers but the store owners that provide essential items.

“I’m a believer that when you have a small business like a hardware store you are part of the community,” Jeff Hastings said.

Hastings co-owns Burke Brothers with his wife. The mom and pop store has been a pillar of the community since 1936. It’s why Hastings didn’t change the business model when he took over the shop more than seven years ago.

His top priority is stocking up on the goods folks need for severe weather, like batteries.

“(It will) be the first thing. If you get a power outage people are going to need it for their flashlights. They gotta be able to see after 9 o’clock at night when they get up in the middle of the night and they hear something go boom,” he said.

The NRF estimated these changes influence over 90% of a business' weather-driven sales.

Hastings watches it play out storm after storm.

“Where are there holes, and if we can’t get this exact product, what can we get that is very much like it that we can put in the hands of the consumer?” he said.

Locals have shopped at the hardware store for more than 80 years.

Much of what Hastings sells depends on how Mother Nature functions.

“When y’all (meteorologists) tell me the storm starts coming, that's when I start to push hard on stocking things up,” Hastings said.

The businessman said customers are curious about the best ways to protect their families.

“You never get the same question twice,” he said.

He said in recent years, ahead of an impending hurricane, more electrical equipment has sold.

“People are turning to this (brand) so they don’t have to worry about fuel resources,” Hastings said.

Hastings said planning for weather events is never-ending. As an independently owned business, he and his wife check inventory well after closing time many nights.

“Where are there holes? And, if we can’t get this exact product, what can we get that is very much like it that we can put in the hands of the consumer?” he said.

Hastings leaned on a shelf and waved his arm in the direction of some products. He pulled out a list of what weather-related products are in stock.

“Top of mind awareness. It tells us what we need to have,” he said as he pointed at the paper.

The list stays in his pocket when he is in the store. He said what they sell is a feeling of safety, whether it be an older couple or a group of college students.

“(We want our customers to) be self-sufficient without having to come back here five or six times for the same issue,” he said.

The store even has a pair of four-legged store mascots: two cats named Paul and John.

He said they have pawed out a fair amount of repeat business.

“You literally see all walks of life, and we see everybody, and it’s a joy to come here every day,” he said.

Hastings said sales can rise 40% before storms hit and revenue can fall 30% if storms are bad enough to close their store.